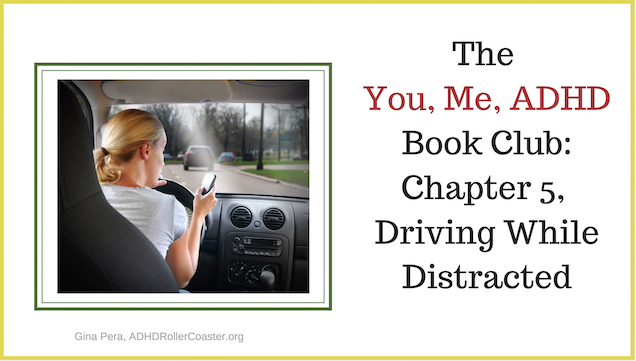 When I started researching Adult ADHD and relationships, way back in 1999, I found an impressive body of research on ADHD and Driving.  Researchers such as Daniel Cox, using driving simulators, clearly documented ADHD-related driving challenges. Moreover, they showed that medication could improve driving safety. That was big. It made an impression.

I shared some of this early research in Chapter 5 of Is It You, Me, or Adult A.D.D.?

I Prayed My ADHD Spouse Would Be Safe on the Road

Adult ADHD can affect driving? Who knew?  My husband drove a 1979 Ford Bronco for most of our marriage. That is, until it caught fire in a Home Depot parking lot. He saved the burned-out shell of it so he could fix it up….someday.

Before treatment, I concluded his tendency to get into wrecks while driving other people’s cars was entirely because he was accustomed to the slow, heavy hunk of metal he’d been driving for so long.

In reality, that slow, heavy hunk of metal may have “weighed him down”—and saved his life.

I prayed every hour that he’d be safe on the road, and counted the minutes till his return.

Another problem was driving long distances: He would simply fall asleep behind the wheel, with no warning. I would be reading or sewing, and suddenly the car would start to drift into the other lane. I’d look over to see his head lolling back and forth.

We devised a system. I would scratch his arm from the elbow up, and he would design his dream roll-top desk in his head. Then, as soon as we found a safe place to stop, I would take the wheel.

It was only later that we discovered this is probably another manifestation of ADHD. That is, boredom leading to, in a sense, “checking out.” Our self-styled strategy, developed before we knew anything about ADHD, served to keep his brain engaged in something more interesting than following that line in the road. It also kept us alive.

I Wasn’t the Best Driver, Either

Meanwhile, I wasn’t winning Safe Driver Awards. In fact, I would become distracted by a phone call, a CD, or talking to someone in the backseat. I once even read the first two chapters of a book while waiting at multiple red lights in an urban area. Dumb, dumb, dumb! Nearly all of my wrecks have been rear-end collisions, with me at-fault.

“No other life activity affected by adult ADHD has been studied more thoroughly than driving. Consistently, these studies show that stimulant medication is effective in mitigating ADHD-related driving deficits.”

Neither of us has had a wreck since we started medication treatment.

As with finances, Gina points out, driving is not a problem in every adult who has ADHD. (See the findings from the ADHD Partner Survey below; the respondents were partners of adults with ADHD.) And, every bad driver is not an untreated ADHDer in disguise. But there are many ways in which ADHD can affect driving.  As Gina writes, “By and large, when it comes to untreated ADHD, the preponderance of evidence suggests critical, even life-threatening disruption.”

ADHD specialist Russell Barkley even proposed that “excessive speeding” be included as a common ADHD symptom. 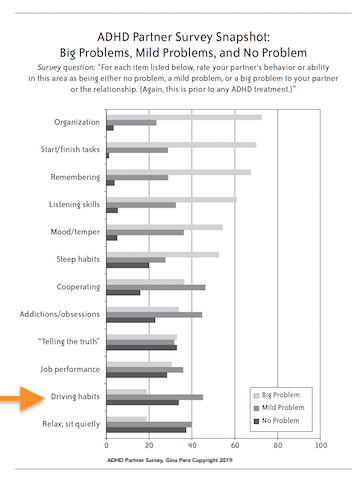 Truly A Matter of Life and Death

How can we recognize ADHD driving behaviors in ourselves and in our partners? Gina helps us to spot these with a symptom-list from educational consultant Marlene Snyder, the author of ADHD & Driving: a Guide for Parents of Teens with ADHD (2001) [now out of print].

It bears repeating: “Consistently, these studies show that stimulant medication is effective in mitigating ADHD-related driving deficits.” Understanding this just became a matter of life and death.

Further Reading on ADHD and Driving:

Here are the three posts I’ve written on ADHD and driving over the years:

Driving to Destruction: The Distractions Add Up

So You Think You Can Text and Drive?

Your story will help others. Please feel free to respond to the discussion even if you haven’t read the chapter (but I recommend that you do!).

22 thoughts on “Chapter 5: How Adult ADHD Can Affect Driving”