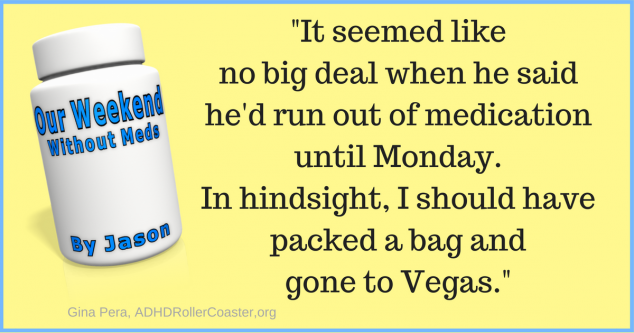 Yes, for many ADHD-challenged individuals and couples, a weekend without ADHD meds can be a very big deal. This first-person story speaks to two common reader questions:

In the early days, I shared the facts and figures.  After all, mounds of double-blind research show the potentially life-changing benefits of stimulant medication for ADHD. That is surely more impressive and convincing than mere opinions, right? Wrong.

Eyes glazed over during these first few fact-based recitations. Then  I got wise: After quickly mentioning the published research, I relayed the before-and-after stories of real-life adults with ADHD.

As one of my college journalism professors used to repeat: “Show, Don’t Tell.” In other words, give your readers facts but enliven those facts with illustrative stories.

With that in mind, I offer you this “as told to” story from a man named Jason. For this couple anyway, it answers the question, “Does the medication really make a difference?”

He’d written to tell me about the weekend that his partner, Ethan, ran out of medication. (Yes, Jason and Ethan are both men, a reminder that ADHD’s effect on relationships is not a “Mars-Venus Thing.” ADHD does not discriminate on the basis of gender, age, creed, political persuasion, or sexual orientation.)

Here’s the thing: Jason did not know Ethan before he was diagnosed with ADHD and started taking medication. In fact, when he first learned about Ethan’s medication, Jason assumed he was making “too big of a deal” of his ADHD. This “lost weekend without ADHD meds”, however, made him a believer.

“A Weekend Without ADHD Meds? Seemed Like No Big Deal”

It seemed like no big deal when my partner, Ethan, said he’d forgotten to call his doctor and would run out of medicine over the weekend. “I’ll just pick it up on Monday, no problem,” he’d said. With hindsight, I should have packed a bag and gone to Vegas. He missed only three days’ medication but the downhill effect was dramatic.

I first noticed the difference on Saturday when it took him three hours to pick up cleaning supplies. On Friday, he had planned to clean out his home office on Sunday. Unfortunately, he made the plans while on his medication. But the event took place while he was off.

On Sunday I sat down to enjoy some basketball games on TV in peace while Ethan cleaned the office. Eight hours later, he asked me to see how it looked. I didn’t know what to say. Yes, the office was cleaner. But the hallway was lined with junk and massive quantities of cleaning supplies.

Then he checks his e-mail.

My ADHD Partner Gets Lost

Two hours later, at midnight, I wander in to tell him goodnight. I found him just staring at the computer. “What’s the matter?,” I asked, full of concern.  “I don’t know,” he said. What? How could this be—he is a born geek!

Turns out, his PC was fine. The problem was, he couldn’t remember what he was trying to do! It took a while. It wasn’t easy. But I finally succeeded in helping him to recognize that his “fuzzy-headedness” was not taking his medication in nearly two days. 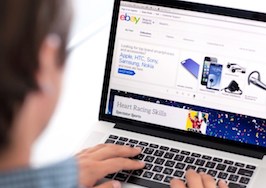 On Monday, he found out that he couldn’t get the prescription until Tuesday. He spent the evening on eBay shopping for things we didn’t need.

Tuesday morning, he asked me to pick up his prescription; he didn’t have time during lunch hour. But he’d transposed two numbers in the address. Without the doctor’s name, I couldn’t find the office.

He said he’d go by after work, get the script, and have it filled. Okay. Then he became lost trying to find his own doctor! He called me for directions, ranting and blaming me because I couldn’t find the doctor’s office earlier.  Despite not having the correct address. Huh? He slammed down the phone, saying he would call back. 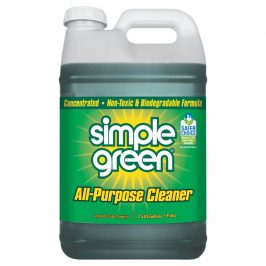 Two hours later, he arrives. I asked why he hadn’t called back. Given the mood he was in, I was worried. But he didn’t remember saying he would call.

Where had he been for two hours, though? “Shopping,” he said. But the only thing in his hands was a little bag containing his medication. “Oh, I forgot the things in the car.” He comes back in, carting unneeded groceries and more of the same cleaning supplies he purchased Saturday! Now, we have two of everything, including the world’s largest bottles of Simple Green!

Finally, he took a dose of the medication this morning. Hopefully, we will be headed back to a more even keel shortly. Hopefully, he will remember to fill his prescription next time before he runs completely out.

In fact, I think I’ll put it on the calendar. 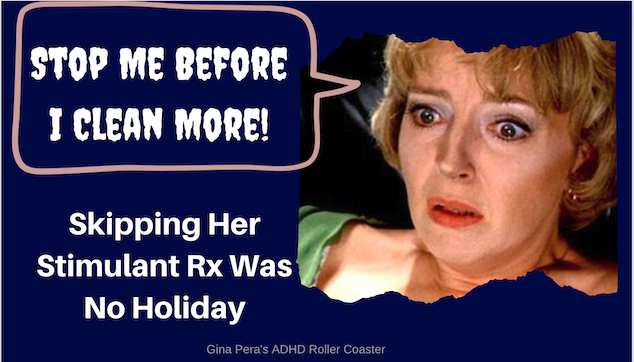 Another Weekend Without ADHD Meds

—I’m struck by the similarities between Katy’s “Drug Holiday—or Horror” and Ethan’s experience. Don’t know that ADHD can mean not “putting the brakes” on obsessive behavior?  Then you might think she has Obsessive-Compulsive Disorder. Instead, it was another Weekend without ADHD Meds.

—What do I mean by “self-medicating” (as in the heading above “Self-Medicating” ADHD by Watching Atrocities)?  We use this term to describe the various, almost unconscious behaviors that some people with ADHD resort to in order to rev up their focus.  You can read more here: When ADHD Leads to Self-Medicating with Arguments

How about you? Can you relate to these examples?

Do you have others to share? What’s the biggest difference medication has made in your life or your ADHD relationship?

19 thoughts on “Our Lost Weekend Without ADHD Meds”