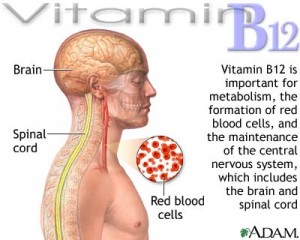 A quick note to share with you this important article on Vitamin B12 in The New York Times.

I lived for many decades not knowing I had borderline pernicious anemia. Finally, a smart physician directed me to supplement B12 with injections. So every week (or when I remember), I stab myself with the required ccs of the red stuff.

But you needn’t have such an obvious condition to question if your B12 stores are all they should be, especially if you eat a mostly vegetarian diet, you take an antacid, or your meals are haphazard.

Other signs of B12 deficiency include muscle weakness,  fatigue, shakiness, unsteady gait, incontinence, low blood pressure, depression and other mood disorders, and cognitive problems like poor memory. Remember that the nervous system (including brain cells) relies on an adequate supply of key vitamins and minerals. Moreover, some medications will increase your need for these nutrients.

An excerpt from the article:

In animal foods, B12 is combined with protein and must be released by stomach acid and an enzyme to be absorbed. Thus, chronic users of acid-suppressing drugs like Prilosec, Prevacid and Nexium, as well as ulcer medications like Pepcid and Tagamet, are at risk of developing a B12 deficiency and often require a daily B12 supplement.

Stomach acid levels decline with age. As many as 30 percent of older people may lack sufficient stomach acid to absorb adequate amounts of B12 from natural sources. Therefore, regular consumption of fortified foods or supplementation with 25 to 100 micrograms of B12 daily is recommended for people over 50.

Synthetic B12, found in supplements and fortified foods, does not depend on stomach acid to be absorbed. But whether natural or synthetic, only some of the B12 consumed gets into the body. Treatment to correct a B12 deficiency typically involves much larger doses than the body actually requires….

In its natural form, B12 is present in significant amounts only in animal foods, most prominently in liver (83 micrograms in a 3.5-ounce serving). Good food sources include other red meats, turkey, fish and shellfish. Lesser amounts of the vitamin are present in dairy products, eggs and chicken

3 thoughts on “Vitamin B12 and Cognitive Function”