The e-mail had me at the subject message: “about translating your book into Turkish.” Six months later, the Turkish version of Is It You, Me, or Adult A.D.D.? is almost ready to meet the public. It is all thanks to Dr. Mehmet Akif Ersoy, a Turkish psychiatrist possessing a keen appreciation for the dramatic difference that proper ADHD diagnosis and treatment can make in a person’s life. He is devoted to increasing public awareness and professional expertise in his home country. Making my book available is a big step in that direction, and I am honored to be a part of it.

Sure, I was a little leery at first. Dr. Ersoy and I had never met, and yet the translation process would require turning over my “baby” (files and all!) to this far-flung stranger. His credentials weren’t in question, and I could no doubt find mutual contacts. I was more interested in the human factor. That is, could I trust this person to understand the heart of my book and compassionately translate it? Fortunately, Dr. Ersoy immediately understood my hesitation and responded in a way that absolutely put me at ease: He sent three photos (one of him with his family, one of his two absolutely darling young sons, and one of him in a London wax museum’s “Oval Office” with President Obama). The combination of which, to my mind, depicted a smart, empathic professional with kind eyes and a sense of humor:  Perfect! The deal was sealed!

It has been my pleasure to also work with book’s translator, Çağlar Özayrancı. Between his careful attention to detail and Dr. Ersoy’s painstaking guidance in ensuring a translation that is clinically accurate but also relevant to a different culture, I’m confident that this book will be as helpful to the Turkish reading public as the English version has been throughout the English speaking world.

As publication date nears, Dr. Ersoy has developed online material on ADHD for a Turkish audience, so please share with your friends who live in that part of the world:

Meanwhile, I was curious about the state of ADHD awareness in Turkey and thought you might be, too. Dr. Ersoy answered a few questions for us:

Gina: At least five years ago, I received an e-mail from a Turkish adult with ADHD; he said that he had been diagnosed and received a rather new and sophisticated medication (Concerta) through the national health system.  That seemed to indicate more sophistication about ADHD in Turkey than in some other EU or Western countries with national healthcare systems (NHS), such as Australia and UK.  How long has Turkey’s NHS accepted the idea of and treated Adult ADHD?  And for children?

Dr. Ersoy: Currently, NHS pays for Ritalin, Concerta and Strattera only for people 25 years old and younger. So Turkey’s NHS still has way to go. ADHD in children is widely known both by laypeople and the Turkish child and adolescent psychiatrists for about the last 10 years. But in adults it is largely neither known nor accepted by adult psychiatrists or lay people. In the last couple of years I’ve see more presentations and posters in national congresses, but not more than can be counted on one hand.

Gina: What is your interest in Adult ADHD?  How did you come to it? Do you teach as well as treat patients, and how do you divide your time?

Dr. Ersoy: My interest in Adult ADHD actually started after my experience with counseling couples. In my private office, where I had the opportunity to see patients long enough, I noticed that in many couples the difficulties in relationships were related with ADHD. Until recently, I spent most of my time treating patients. After becoming an associate professor, I now also teach and research, so my time is divided almost equally among treating, teaching, and researching.

Gina: What do you enjoy most about serving the Adult ADHD population?

Dr. Ersoy: I enjoy showing people what no professional or themselves had thought of before: that is, giving them opportunity to treat what seemed before untreatable. Mostly, people who have ADHD-related problems think it is all about “personality.”

Gina: The conservative estimate is that 4 percent of the U.S. adult population has ADHD; that’s about 10 million, with only 10 percent diagnosed, or about 1 million. Do you know the statistics for Turkey?

Dr. Ersoy: I am not aware of any epidemiological study about ADHD in Turkey. The disorder’s biological and genetic compound makes me think that prevalence is very probably same in Turkey and US population.

Gina: Is the diagnosis made in Turkey roughly the same way as it is in the U.S.? Meaning, do you use the Diagnostic and Statistical Manual (DSM), published by the American Psychiatric Association (APA)?

Dr. Ersoy: The diagnosis of ADHD in Turkey is based on DSM-IV. And, the DSM is well known in Turkey, which is unfortunate when it comes to adult ADHD [Gina notes: because the DSM-IV criteria are largely based on studying children with ADHD and are not geared to adult challenges]. I hope DSM-V will cover more Adult ADHD; that is, more than mentioned in the APA’s webpage.

Gina: Do you know how many psychiatrists and psychologists are trained to treat ADHD in Turkey?

Dr. Ersoy: Child psychiatrists are trained to diagnose and treat child ADHD. But as far as I notice, from time to time even child psychiatrists are reluctant to treat children with stimulants. Most of the adult psychiatry residency programs have no training at all about Adult ADHD. Psychologists, consultants, family therapists and other mental health professionals have no training at all about ADHD. After they graduate, if they have a chance to follow children they learn something about pediatric ADHD, but those working with adults don’t even think about the probability of the diagnosis of ADHD.

Dr. Ersoy: I know some professors dedicate their time on research in ADHD in children. But research in adult ADHD is scarce.

Gina: I read the attached study from Turkey, on zinc and ADHD, years ago.  Is there more emphasis on basic research instead of pharmaceutical-based research there?

Drug companies are interested in phase 3 and 4 studies in Turkey more and more, because they don’t want to work with the professional patients in western countries. I can’t say research in Turkey is more on basic research or vice versa. Most of the research in Turkey is self-funded, and research is driven more by academic interest than by economic interest, I think. We don’t have many resources for research; most academicians in universities have private office and are more interested in treating than research. But the current government is trying to change this. I don’t think this will change in short time. Because our salaries are paid by seeing patients, not from research.

Dr. Ersoy: Gina. You did a great job. You wrote quite clearly about everything people with ADHD and their relatives need to know. This book must be read by the patients as well as their relatives, friends, and treating professionals.

In Turkey, the healthcare system allows a psychiatrist to see a patient only 5 minutes or so, which is not enough of course to diagnose this disorder, especially when the primary concern is relationship problems. Because of this, people visit the offices of psychologists and therapists. Every therapist, psychologist and couple therapist must read this book. This book is an eye-opener for the subtle appearances and side effects of ADHD.

For years, I’ve longed to visit Turkey. Last spring I almost made it to Istanbul before contracting a nasty flu in 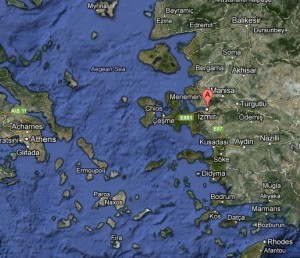 London that meant canceling the rest of my travels. When I next plan a trip to Turkey, I will now include a visit to beautiful Western Anatolia, specifically to the city where Dr. Ersoy teaches: Izmir, called the “Pearl of the Aegean” and considered one of the country’s most progressive cities.

7 thoughts on “Soon! A Turkish Translation of “You Me ADD””