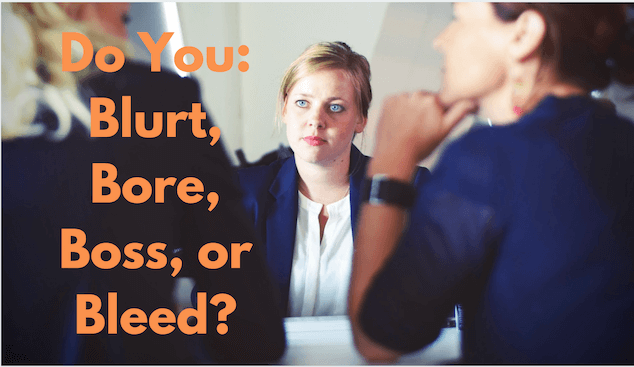 It’s not hard to understand ADHD neurobiology might create difficulties with social skills.  After all, social interaction relies upon being able to pay attention, remember what a person said, and respond in kind—among other behaviors.

For example, when it comes to conversational styles, do you or someone you love tend to blurt or bore? How about boss or even bleed (oversharing a litany of woes)?

In this guest post, Seattle therapist Tanya Ruckstuhl-Valenti summarizes these four “Bs” as social bloopers we all want to avoid.

Social isolation compounds mental-health issues by removing the normalizing effect of being in the company of other imperfect beings who are, like us, doing the best they can.

This loss of beneficial feedback further reinforces the sense of “shame of imperfection” that many mental-health issues share as a root fallacy.

So it’s my passion to talk about social skills because I think they are both simple and transformative.

Good conversations, like good relationships, require both an intersection of interest as well as a departure from familiarity. After all, what use is there in having someone in your life who thinks and acts exactly like you?

As such, we never need to worry about not having enough in common with another person.  Our differences are flavoring. Our similarities are the underlying basic ingredients we are all made from.

For now, let’s focus on Conversation Killers, which all involve failing to think about the other person. I like to summarize them as four Bs: Boring, Bleeding, Blurting and Bossy.

There are two ways to be boring.  The first is to show no personal vulnerability by sharing no information.  Imagine trying to pick up a heavy, completely smooth package that has no edges or handles.  This is what it’s like to try to connect with someone who displays no vulnerability.

This kind of boring is often characterized by responding to personal inquiries with the single word, “fine.”  (Note: The barista is just being polite when she asks you how your day is going.  With cordial strangers simply saying “fine” is hunky-dory).

Perfectionists sometimes fall into this Conversation Killing category because they often fail to give themselves permission to talk spontaneously.

Now, it’s appropriate to be “boring” in some corporate settings and job interviews. In other words, when in professional settings, save your juicy personal stories for people who you spend time with outside of work.  This can include coworkers but only coworkers you have spent time getting to know.

The second way we can be boring is over-talking a subject that holds no interest to the listener. Self-awareness comes into play here.

For instance, I know just enough about quantum physics and mitochondria to bore almost anybody (but sadly, not enough to interest someone who actually knows about physics or mitochondria.). So if you have a pet interest, that’s great, but beware the monologue.

One way to manage this is to offer a sentence or two about your passion and then check in with the other person to see if they are as interested as you are.  It beats the legal defense fees of tying them down to force them to listen.

Take turns talking by asking questions.  This may seem obvious but I cannot count how many times I have attended parties or other superficial-talk settings where I have observed someone holding forth. The person is perfectly interesting to listen to for a few minutes but is completely uninterested in the people around them.

So, you can avoid being boring by showing some personal vulnerability.

One simple way to do this is to share something you are struggling within your own life such as diet or work-life balance or parenting teenagers or dating after divorce, but to do it in a way that is sensitive to the interests of the listener.

For instance, if you have a baby and your listener has no children, you may want to mention your child’s name and age as a way of revealing what matters most to you, but you would not want to provide great detail about little Emily’s spit up volume.

Now imagine trying to pick up a torn plastic bag with water in it.  You can easily get a grip on it, but everything inside falls out.  This is what it’s like to try to connect with someone who is overly vulnerable.

I once took a class where the instructor had us all go around in a circle and say why we were there.  I knew I was in trouble when the woman sitting across from me started with this sentence:“I’m here because my husband died.  Well. He wasn’t really my husband, but I was taking care of him.”

She proceeded to careen off-topic and to talk endlessly about herself in a bad-country-music-song kind of way for the entire six-week class.

Sitting across the table from her was like being trapped in sticky pit of tar.  There was no escape from her voluminous pain.

…But Not Too Much Personal Vulnerability

Displaying too much personal vulnerability means we have no room for or interest in other people’s stories. This communication pattern is completely normal, however, following a crisis.

Remember that humans are relational.  Anyone who has experienced a death, a divorce, or a medically traumatic event requires the validation of being witnessed by their tribe.

What that looks like in modern society is being able to tell their story and receive an empathic response such as “That must have been so hard for you.  How are you doing?”

Bleeding communication is a problem only if over the course of our lives it is a metronome beating a regular and constant pattern—rather than a rare punctuation following a crisis.

For some people, feeling sorry for themselves becomes a bad habit as well as a bid for attention.  The problem is that it ultimately makes others tune them out rather than provide social support.

If you suspect that this may apply to you, getting some professional support from a therapist or personal coach can be a great way to excavate that pattern and create new ways of connecting with yourself and others.

Think of blurting as expressing judgment without regard to other person’s feelings. This pattern can be particularly difficult for ADHD folks.

I am no longer a welcome member of local PTA meetings.  It’s not their fault, it’s my fault. One long evening, after a very long day, we were discussing fundraising. This is pretty much limited to imported plastic junk from a certain third-world nation that employs slave-type labor.

Foolishly, very foolishly, I opened my mouth.  I said what I thought of turning my children into economic engines for the school selling objects which I found morally questionable made in a way I believe to be wrong.

I used the term “chunky plastic crap from China.”  Suffice it to say I was not elected to office.

Blurters are usually very honest people who place great value in truth-telling.  We can all agree that telling the truth is an extremely important personal value and boundary.

The Message? The Other Person’s Feelings Don’t Matter

Blurting can be very damaging to relationships because the message that the blurter inadvertently sends is that the other person’s feelings don’t matter to them.

If you know that blurting is one of your tendencies, consider the Buddhist loving-kindness practice of asking, before speaking:
1.    Is it true?
2.    Is it necessary?
3.    Is it kind?

If during the PTA meeting I had been more mindful about the feelings of others, I would have considered that any efforts to raise money for the PTA were ultimately about enhancing education for all children.

Rather than criticize what was being done, I would have tried to influence future fundraising in a more respectful manner.

Being bossy means telling other people what they should do.

As parents, we boss our kids around—because our children are so important to us and we want them to protect them.

People are bossy both to be in a power position but also to express their interest in and attachment to the other person. In other words, bossy people are so distressed by the thought that someone they care about might make a mistake that they take it upon themselves to manage and direct the people around them.

Bossiness Can Spring From Caring—But Backfire

Often adults who were neglected as children become bossy. They are trying to give to others the guidance that they themselves needed and lacked as children.  In this way, bossiness is actually an unskillful attempt to be an attentive caretaker.

Unfortunately, bossing other people around is experienced by the other person as a lack of faith in their intelligence and abilities. They feel angry at the bossy person’s attempts to control them. Remember that not even Pinocchio wanted to be someone else’s puppet.

One subtle form of bossiness is giving people books they did not ask for—because you think they “need” to read them.

If you know that bossiness is one of your patterns, ask loved ones to gently put you in check. Get help for the underlying anxiety that drives bossiness.  Help includes anything that decreases anxiety such as engaging in a mindfulness practice, doing yoga, seeing a therapist, doing intense physical exercise and regular self-care.

That’s the four B’s!  We all engage in them sometimes.  But if you find yourself reading this article and remembering a dozen examples of engaging in any one or some of these patters, take heart and change course.

Author Bio:  Tanya Ruckstuhl-Valenti LICSW, MSW is a clinical social worker in Seattle specializing in the treatment of anxiety disorders and ADHD.  She runs a monthly social skills group for adults. To learn more, visit her website.

5 thoughts on “Quick Tips on ADHD and Social Skills: Banish the Four B’s”