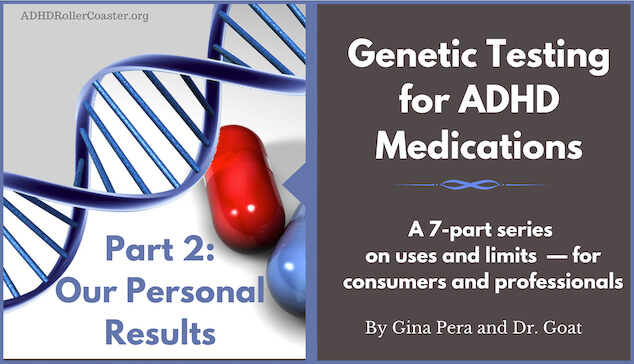 In this post, we share our own results from genetic testing for ADHD medications. We hope this helps make the information a little more concrete, less abstract.

My husband, Dr. Goat, and I share many interests, tastes, and preferences. Still, we are very different individuals. Anyone who knows us can attest. But when the proof of our differences shows up in the genotyping, well, that’s science.

Here’s the rest of the story here in part 2 of this ADHD Roller Coaster series on Gene-Testing to Inform ADHD Drug Therapy.  If you missed the overview: Genetic-Testing for ADHD Medications: Overview.

Recently, Gina and I explored the brave new world of genotyping – specifically, the genetic testing developed by a company called Harmonyx.  Their testing aims to tell you which of 9 ADHD medications might be the best bets for someone with ADHD. There are other tests, but this is the one we picked for this purpose.

[Update: The Harmonyx testing, made available via drugstore pharmacists, was later restricted by the FDA. Other labs offer similar testing by prescription from MD. Two companies that might offer this are Genesight and Genomind.  These blog posts pertain to any type of gene-testing purporting to inform ADHD drug-response.]

(We have no business relationship with any company. No one is paying us to write about this testing.)

I have ADHD, but Gina does not. She took the test out of curiosity—and to see how her results might differ from mine.

Completing the test was simple enough. We opened the envelope, filled out a brief form, dabbed a Q-tip in each side of our mouth cheeks, shipped it off to the lab in the envelope provided—and forgot completely about it.

When we received the genetic test results a few days later—a PDF via e-mail—I felt, well, just a bit queasy.

First, some background about why this testing was doubly interesting to me.

I am a geneticist with deep professional familiarity with the field of pharmacogenomics (that is, how genes influence our response to medication). Moreover, I have been treated with ADHD medications for more than a decade. So, receiving these results provided a most interesting and novel experience. Novelty is an increasing rarity in my mid-middle age.

In this blog series’ future posts, you’ll find a more scientific and practical explanation of what this genotyping business is about. To summarize here briefly, the intent of this testing is to give you an idea of:

Our genetic testing for choosing ADHD medications did that by assessing what particular variations one has in a small number of genes. These genes, known to influence response to the medications often used to treat ADHD, are:

Face to Face with My Crappy Genes

As it turns out, I have a bunch of semi-crappy genetic variants. As such, they somewhat compromise the effectiveness of many of those drugs for me.

Now, there’s nothing terribly bad about my testing results, thanks for the concern. But hey, I definitely don’t have top-of-the-line genes in this department. (Nor, by the way, do I have the worst.)

In a way, that’s just fine, because everyone has crappy gene variants somewhere in their genome. The genome is the collection of all genes. If you watch NOVA’s Cracking the Code of Life, you know that genes are present in nearly all cells in the body. They constitute the “instruction book of life.”

As it turns out, I have

In addition to somewhat compromising my ability to benefit from many of these drugs (seven out of the nine listed in the results, sigh), I have a suspicion: At least one of these variant genes may well contribute to my having ADHD in the first place.

The testing company claimed nothing of the sort, however. At this point, the science remains nascent about identifying the specific causative genes for ADHD. Even though we know ADHD is heavily genetic, we have only a vague idea of which genes exactly may be involved.

I spoke with the Harmonyx CEO and a number of their folks. Clearly, they were trying their best to make the whole process as evidence-based as possible—meaning, sticking to what has been established in the scientific literature. That includes selecting which genetic variants to genotype.

You would think that basing a medical test or intervention on published data would always be the case in medicine. But in fact, it is frequently—perhaps mostly—not the case. Lots of stuff gets done and said in medicine without anything approximating real data to back it up. 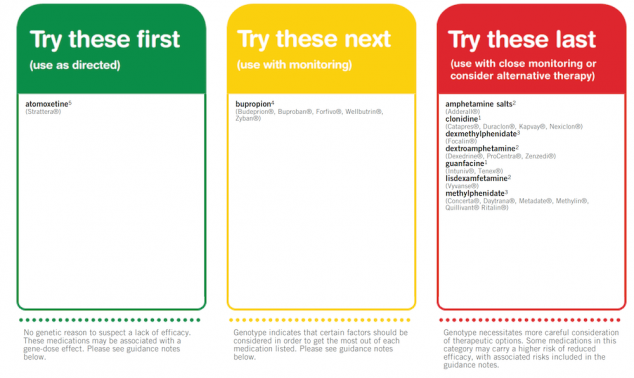 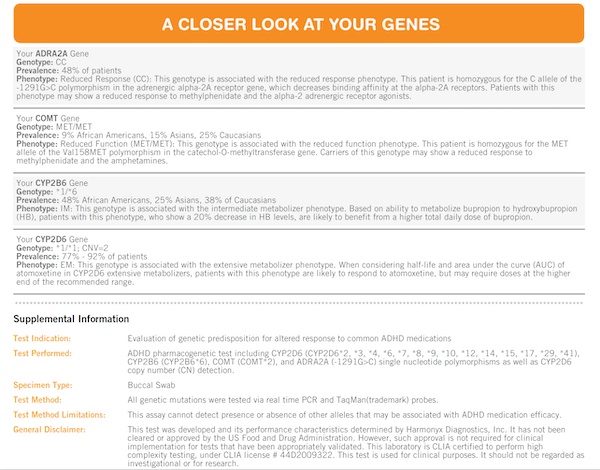 There I was, confronted with these somewhat unsavory results. For years, I had pontificated professionally, always in the abstract, regarding how pharmacogenomics data should be used. Suddenly, I was  faced with getting off my academic high horse and acting on my own “data.” How I might do that will be the topic of a future post.

A second, and most interesting, aspect—at least to me: the genotyping results for Gina. 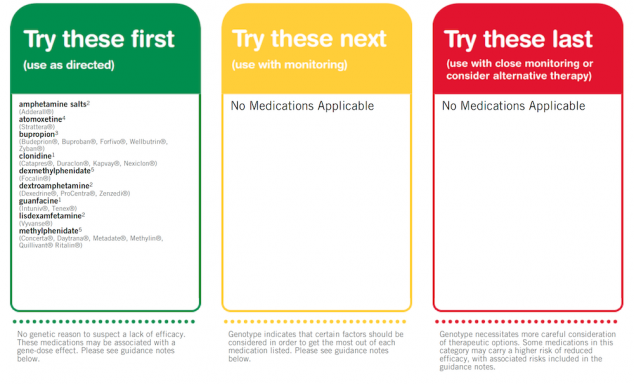 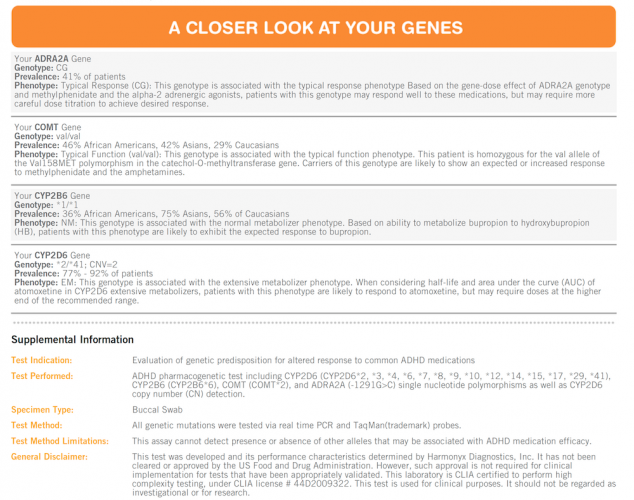 No, Gina doesn’t have ADHD. Indeed, she is very far from the ADHD phenotype. (Briefly, this term refers to the expression of a genotype in the form of traits that can be seen and measured, such as hair or eye color—or not having ADHD.)

As far as the genes related to ADHD medication-response, she has no semi-weirdo variants. Damn it!

We were both struck by the difference in her results versus mine.

And you know what? My initial knee-jerk chimpanzee reaction was one of visceral envy for her genes—to the point that had I not been a highly evolved member of Homo sapiens sapiens, I would have gladly pi**sed on her printed results just to even the score.

But as I’ve already said, so what? She’ll have “deficiencies” in other genes somewhere in genome, so no big deal.

Note: Just because Gina has genes that will normally metabolize these medications, that doesn’t mean that she should take them. So, please don’t mistake this test as being diagnostic for you or your child. This test is just one part of the puzzle.

Similarly, even though many medications are listed in the third column of my results, that doesn’t necessarily mean that those medications won’t be effective for me, Dr. Goat.

Next, we explain the basics of genetic testing, also called genotyping: What Does It Mean to Gene-Test for ADHD Medications?