You are here: Home / Tools & Strategies / What Might Kill Me?: An Astronaut’s Tips for ADHD Adults 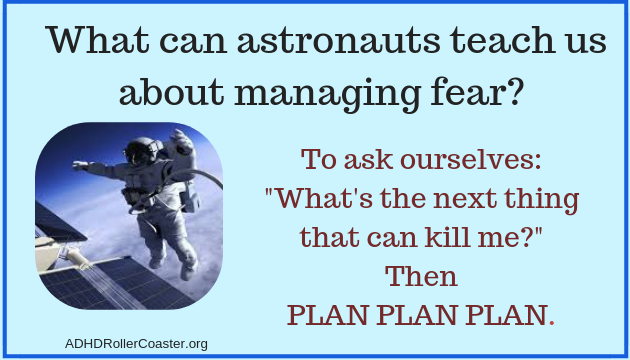 Astronauts might have particularly useful tips for adults with ADHD—and everybody else.

When you sit in a spaceship hurtling around the Earth at 17,500 miles per hour, you learn something about managing risk—and panic. As I listened to this interview with a famous astronaut, Chris Hadfield, I thought, “That’s exactly the strategy Dr. Goat and I need for planning a terror-free vacation!”

We ran through every contingency. We had index cards. We practiced. It worked!  I’ll share the details in a future post.

This strikes me as a powerful global strategy for ADHD-challenged adults and their partners. No, not planning for disaster but planning for fun—and preventing or coping with predictable disasters instead of down spiraling when they occur.

For now, a few tidbits from this accomplished astronaut and how he preps mentally for orbit.

You might already know Canadian Chris Hadfield from his YouTube version of David Bowie’s “Space Oddity,” with almost 32 million views so far.

In space, Commander Hadfield has:

Earthbound in Houston, he’s served as the chief of International Space Station operations and chief CAPCOM commander (that’s the person who communicates from mission control with astronauts in orbit).

He’s written a very engaging book, An Astronaut’s Guide to Life on Earth: What Going to Space Taught Me About Ingenuity, Determination, and Being Prepared for Anything. “This memoir is part fascinating view, part Boy Scout manual,” wrote The New York Times.

You can listen to Hadfield’s interview with “Fresh Air’s” Terry Gross (October 30, 2013) and download the transcript.

GROSS: Give us a sense of what that “what’s the next thing that will kill me” training process is like.

HADFIELD: Terry, I found it to be so helpful in my regular life. But I didn’t mean it to be that way. But of course as an astronaut, especially during launch, half of the risk of a six-month flight is in the first nine minutes. So as a crew, how do you stay focused? How do you not get paralyzed by the fear of it?

What we do is break down what are the risks. And a nice way to keep reminding yourself is what’s the next thing that’s going to kill me. It might be five seconds away. It might be an inadvertent engine shutdown. It might be staging of the solid rockets coming off. Or it might be, you know, some transition or some key next thing.

We’ve already, say, had one computer fail, and we’ve had one hydraulic system fail. So if these three things fail, we need to react right away, or we’re done.

So we don’t just live with that, though. And the thing that is really useful, I think, out of all this is we dig into it so deeply, and we look at OK, so this might kill us. This is something that would normally panic us. Let’s get ready. Let’s think about it. And we go into every excruciating detail of why that might affect what we’re doing and what we can do to resolve it and have a plan and be comfortable with it and practice is. 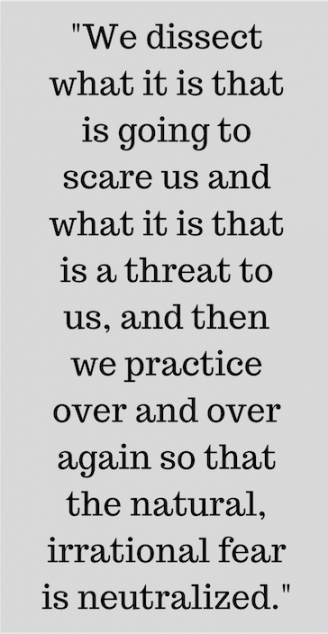 To Make It Work? Neutralize Fear

GROSS: And you say in order to make this work, you have to neutralize fear.

HADFIELD: Yeah, but, I mean, it’s not like astronauts are braver than other people. We’re just, you know, meticulously prepared. We dissect what it is that is going to scare us and what it is that is a threat to us, and then we practice over and over again so that the natural, irrational fear is neutralized.

So you have to practice and learn what’s the right thing to do. But given that, it actually gives you a real great comfort. It’s counterintuitive, you know, to visualize disaster, but by visualizing disaster, that’s what keeps us alive.

And your first reaction is not just to scream and flee with your hands waving over your head, but in fact, to go hey, we thought about this, and I know that this is dangerous, but there are six things that I could do right now, all of which will help make things better.

And it’s worth remembering, too, there’s no problem so bad that you can’t make it worse also.

Finally, you’ll find an excerpt of the book here:  Astronaut Chris Hadfield Brings Lessons From Space Down To Earth

How do you manage fear and panic?

Do you find this astronaut’s perspective interesting or helpful?