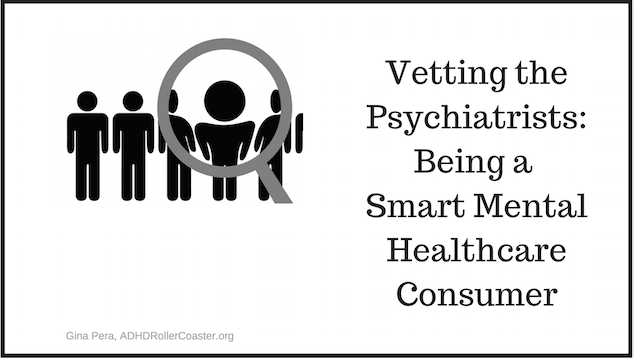 There no easy answers. But thanks to the Internet, you might be able to learn important information before making that first appointment. Yes, I mean credentials and insurance plans. But beyond that, I mean searching for clues as to the psychiatrist’s true understanding of ADHD.

Self-Education Is The First Step

Readers worldwide ask me for referrals to ADHD-savvy psychiatrists or therapists in their area.  I do my best to help. Over 20 years, attending major ADHD conferences and meeting many ADHD specialists, I often do know a professional in their area.

No matter how reputable the clinician, however, I first recommend self-education and self-advocacy.  Even when I provide a name as a starting point. In doing so, you become better able to vet a potential mental healthcare provider and you can work better as a team.

When I have no names to offer, I suggest they search for a local Adult ADHD support group. If there is one, attend that and ask for recommendations.

Keep in mind, though, that sometimes folks might like very much a psychiatrist who is not all that competent.  They are just so grateful to finally find a prescriber who “believes” in ADHD, they stop looking.  Ask specific questions to gain a better idea. For example, “How did the doctor introduce medication and monitor the effects?”

Basics of Vetting a Psychiatrist

Next, I recommend performing a Google search for local ADHD specialists. If they have a website, thoroughly read the text. Glean all you can about approach, training, and particularly attitudes toward ADHD. When you are self-educated on ADHD, you are better able to spot the red flags—and the green ones, too.

For example, phrases such as “medication as a last resort” can be a red flag—or it might be that professional’s awkward way of discouraging “drug seekers.” A green flag might be education at a known center of ADHD research and expertise (e.g. Harvard University, University of Pennsylvania, Johns Hopkins University, etc.).

This article on the Healthgrades website offers some basic tips 8 tips for Choosing a Psychiatrist. I typically don’t link to commercial sites, but you might find the Healthgrades database useful when it comes to learning a professional’s credentials.

My advice is sometimes met with discomfort.  I get it: We want to believe that a licensed mental health professional, especially a board-certified psychiatrist, has demonstrated competence in understanding and recognizing a range of psychiatric diagnoses.  We don’t want to hear: “Maybe not” or “Trust, but verify.”

But friends, I worry about vulnerable individuals being alone in an office with some of these characters. I’ve heard too many stories.  Sometimes there is a private face and a public face. That is, I listen in the audience as the psychiatrist speaks on stage at a conference—and then I hear from support-group members or readers as to their actual experience.

Online, sometimes you will see a disparity between what psychiatrists include on their websites—and what they write in, or in response to, blog posts or articles.

Truth in Advertising—Err, Blogging and Commenting

Never have I seen a clearer case of “truth in advertising”  than this blog post (Another Dubious, Hyped Disorder) from David  M. Allen, MD.

According to his Psychology Today profile, he received his medical degree from U.C. San Francisco and did his psychiatric residency at the Los Angeles County-University of Southern California Medical Center. Even if I hadn’t first encountered his “song” about ADHD, that would have raised the first red flag for me. Unfortunately, California universities lag extremely far behind the East Coast’s Harvard University, University of Pennsylvania, and others. More about that in a minute.

His ample blog posts and book subjects tell me this: He harkens to the “blame the parents” school that eschews factoring in psychiatric conditions, especially those that are highly genetic (e.g. ADHD). If you doubt me, read his blog. Search for ADHD and read the selections. 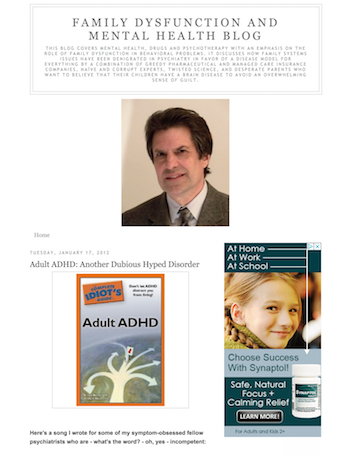 Here’s a song I wrote for some of my symptom-obsessed fellow psychiatrists who are – what’s the word? – oh, yes – incompetent:

Take some of these and you’ll feel better
Forget about those hippies who claimed, “speed kills”
You’ve got ADHD and just a touch of bipolar
Things are always better when you’re taking pills

In another post, ADHD: More Misleading Propaganda, he keeps digging the hole. And it becomes more and more obvious: His hidebound philosophy seeks to blame all adult challenges and dysfunctions on childhood and family dysfunction. Seemingly unknown to him: The “dysfunctional” parent might also be struggling with ADHD. Poor parenting might exacerbate a child’s ADHD symptoms but it does not cause ADHD. Psychiatrists who have strong ADHD expertise know that nature-nurture is a complex issue.

In that post, Allen slanders one of the most rigorous researchers in the field of ADHD. But he is the one betraying his stubborn ignorance and perhaps inability to understand the research:

I use the word “diagnosed” with ADHD in the first paragraph above rather than “have” ADHD because, as I have demonstrated in previous posts, the evaluation of patients who seem to have these problems leaves out an entire and absolutely essential part of their lives – the behavior of their families that provides a context for the child’s “symptoms.”

But Profits from Synaptol Ads

As an aside: Do you see the ad for Synaptol in the photo above?   That company is omnipresent throughout the Internet on any website that includes the term ADHD.  Sites that use Google’s Adsense can select the types of ads they do not want on their sites. I checked 600 Synaptol ads for exclusion from my blog. I did not want to confuse readers with an apparent endorsement of a company that profits by exploiting anti-medication fears.

Synaptol is “homeopathic”—that is, mostly water with no medicinal properties—and unregulated for safety. The Better Business Bureau issued this statement about Synaptol in 2013:

NAD further recommended that the advertiser discontinue its use of testimonials claiming that Synaptol treats ADD/ADHD symptoms or that is can be used as a replacement for or alternative to prescription treatments for ADD/ADHD. 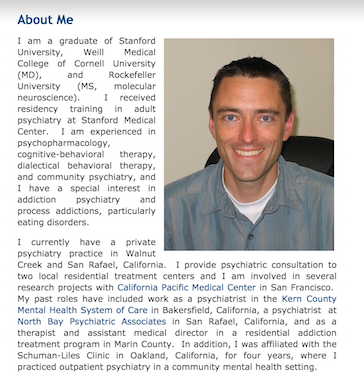 Another Psychiatrist Chimes In

Here’s my idea. Let’s just stop calling ADHD a “disorder,” thereby giving it credence it doesn’t deserve (at least not yet).

I’m serious. We can still prescribe ADHD meds to people if they say they help—along with the proper safeguards, of course—in the name of “cosmetic pharmacology.”

Heck, dermatologists, plastic surgeons, and bariatric specialists do procedures for more dubious “conditions” all the time.

In the meantime, we should continue to do genetic, neuroimaging, psychological investigations to determine the root cause of inattention & hyperactivity—and, perhaps, to determine whether a sub-population of our “ADHD” people actually have a biologically based disorder, and if so, how best to treat them.

Was I surprised to learn that this came from a psychiatrist in San Rafael, California? No, such attitudes in the San Francisco Bay Area are more the rule than the exception. Especially, I must say, in the very wealthy North Bay.

Moreover, I see that this psychiatrist did his residency at Stanford. Unfortunately, Stanford is also a West Coast hotbed of ignorance and neglect when it comes to  Adult ADHD. That’s not to say that some competent ADHD-savvy psychiatrists don’t hail from Stanford’s Medical school.  Only to say that they must have learned about Adult ADHD elsewhere.

When I responded to his comment, he backtracked and said he hadn’t said what he said. But it’s there in black and white.

Trust These Physicians for ADHD Expertise?

There we have two examples:

The fact that one went to medical school and both did their residencies in California does not surprise me. People are always surprised to hear me say this.

“Isn’t the Bay Area supposed to be a technological forefront?” Yes, if you like gadgets or suffer from one of the diseases in which Stanford and UCSF excel.

“Don’t both Stanford and UCSF boast many Nobel laureates?” Yes, both are widely respected universities—and not without reason. But when it comes to ADHD? Frankly, I’ve seen them to be abusive.

If the Bay Area is sparse when it comes to ADHD expertise, my hometown of Memphis seems worse. In fact, the general quality of psychiatry in Memphis seems very shaky.  Why do I mention this?  Because I see that Allen practices in Memphis and is a professor emeritus at the University Of Tennesse Health Science Center.

But please note: If you read only Steve Balt’s website, you would not know his more candid attitudes towards ADHD. This is what he writes there:

I am a psychiatrist practicing in San Rafael, California, and specializing in comprehensive, individualized care for adults with a variety of mental health conditions, including mood disorders such as depression and bipolar disorder; anxiety; PTSD; obsessive-compulsive disorder; attention deficit/hyperactivity disorder (ADHD); eating disorders; addictions to alcohol, drugs, food, and behaviors; and lifestyle problems pertaining to relationships, life transitions, grief and loss, and inability to achieve one’s personal goals.

I believe in developing an individualized treatment plan for each patient, which capitalizes upon each person’s distinct strengths while identifying the areas in which further growth is necessary or desired.  I provide medication management as well as ongoing psychotherapy.  I absolutely respect each individual’s feelings regarding medications, and I will work with each patient to establish a treatment plan that is acceptable to both patient and physician, as I believe this is essential for treatment success.  When medications are prescribed, I wish to help the patient understand the impact of such interventions on his or her life, as well as the areas in which medications will have little or no effect.

This posted is an updated version of a 2013 post. The sites linked to remain unchanged.
I always welcome your comments.
—Gina Pera

31 thoughts on “Vetting a Psychiatrist for ADHD Expertise”