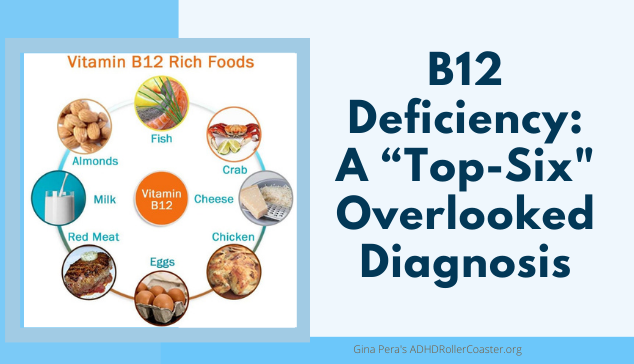 What does Vitamin B-12 have to do with brain function?  Plenty.  In fact, Vitamin B-12 deficiency can cause “brain fog,” depression, and more.

I’m delighted to present this guest post on this topic from physician David Edelberg, MD. He helps us navigate this issue as being a bit more complex than “getting a blood test.”

But first let me tell you how I came to know Dave as a physician-sleuth who makes important connections.

Fibromyalgia Led Him to ADHD

“How could I not have known about adult ADHD before?” Dr. Edelberg remembers asking himself after attending a lecture in the late 1990s.

When he related this story, I was interviewing him not about ADHD but for an article about fibromyalgia. Why? I had identified him as a national expert on this debilitating condition. It’s one that seemed to be targeting the partners of adults with poorly managed ADHD in higher-than-average numbers.

Dr. Edelberg had made the connection, too, but not in the way you might expect.

“Now, when my female patients talk about their life stresses, and I get enough clues about the husband, I’ll ask if he has ever been tested for Adult ADHD,” explains Edelberg, cofounder of an integrative medical clinic called Whole Health Chicago.

Men living with an undiagnosed ADHD partner’s problematic behavior suffer stress, too. But some experts think that women are more biologically vulnerable to stress-induced maladies. “That’s because women lose the brain chemical serotonin much more quickly than men do, and replace it more slowly,” Edelberg explains. (I write more about this in my first book, Is It You, Me, or  Adult A.D.D.?

By the way, I hear from many women with late-diagnosis ADHD who also have fibromyalgia, often after decades of stress.

Edelberg lays out a program for fibromyalgia patients in his book, Healing Fibromyalgia. That followed his extremely helpful book, The Triple Whammy Cure: the Breakthrough Women’s Health Program for Feeling Good Again in Three Weeks.

Now, here is Dr. Edelberg’s guest post on B-12 Deficiency. It’s the first of “Six Commonly Missed Diagnoses” he addressed currently in his newsletter (link below).

B12 Deficiency: A “Top-Six Overlooked Diagnosis”

You’re pretty sure you know your body. You tell your doctor you’re just not feeling right. You’re tired, maybe a little depressed, a bit achy.  The list of foods you can’t seem to enjoy is definitely longer. Your doctor’s empathic, not at all dismissive of your symptoms. But after a physical exam and some apparently appropriate tests, she can’t find anything really wrong.

On the surface, this is reassuring. After all, the main reason we do go to doctors is to ascertain that nothing serious is going on. Still, could she be overlooking something?

After decades of treating patients with longstanding but undiagnosed chronic symptoms, here’s the first of six overlooked diagnoses I see most frequently in our patients at WholeHealth Chicago): Vitamin B-12 deficiency. 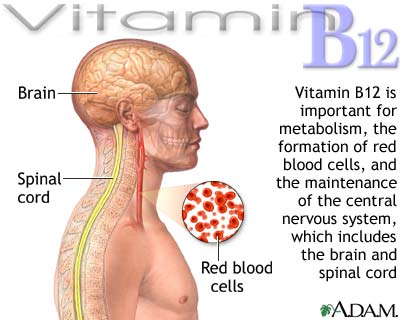 One of the eight B vitamins, B-12 is involved in the metabolism of every cell in your body.

Years ago, B-12 was called “maturation factor” because cells need B-12 to mature from being young and ineffectual whippersnappers to fully functioning and mature.

B-12 deficiencies affect three major systems in your body:

These three systems are targets because their cells either have a high turnover rate (blood and intestinal lining) or need a lot of B-12 to function smoothly (nervous system). The symptoms of low B-12 levels are related to each of these areas.

B-12 deficiency can result in  a specific type of anemia called megaloblastic anemia (as distinct from the more common iron deficiency anemia). A megaloblast is an immature, undeveloped red blood cell, large and bulky (megalo=large, blast=immature form).

Remember, B-12 is needed for this cell to mature, so with insufficient B-12 megaloblasts accumulate in your blood. Symptoms are the same as for anemia from any cause, including fatigue, breathlessness, and lightheadedness. Your skin becomes a pale yellow, most likely because the red cells that do make it to maturity are very fragile and easily broken, releasing their yellow bilirubin pigment.

B-12 deficiency causes symptoms affecting your:

You might experience digestive symptoms and weight loss because you’re not absorbing food efficiently.

The irony is that with all these there’s usually just one predominant symptom, and making a connection to low B-12 can easily be delayed until other symptoms start to appear. For example, if your only symptom is tingling in your hands, you might undergo all sorts of diagnostic tests before your doctor thinks “Maybe we should check her B-12 level.”

What Causes B-12 Deficiency?

The list of causes is lengthy, but by far the most frequent culprit is a dietary one. Vegetarians who aren’t paying attention to the B-12 in their food choices will have downward-drifting B-12 levels.  Virtually all vegans not taking Vitamin B-12 supplements ultimately develop deficiencies. Even the various vegan organizations acknowledge it’s not possible to get adequate B-12 while following a strictly vegan diet.  That’s because the richest sources are animal products.

Other causes of B-12 deficiency include pernicious anemia, an uncommon autoimmune disease that destroys parietal stomach cells. These cells produce a substance called intrinsic factor, necessary for B-12 absorption.

Also, since you need stomach acid to absorb B-12, long-term use of acid-suppressing proton pump inhibitors (Nexium, etc.) can lead to B-12 deficiency. So can chronic intestinal conditions such as Crohn’s disease, celiac disease, and intestinal parasites.

Danger of Missing B-12 Deficiency

What is the main danger of missing this diagnosis? While quite rare, the damage to your nerves and even brain can be permanent.

Other serious consequences: Your anemia can get so severe it causes heart failure and collapse. Or you could be misdiagnosed with a major depressive disorder or even psychosis and take unneeded psychiatric medications for months (or years) before someone notices you look yellow-ish and you’re finally diagnosed with megaloblastic anemia.

Four Reasons This Diagnosis Is Missed

There are four reasons why this diagnosis is missed:

It’s not an expensive test. Yet, doctors generally don’t order a B-12 evaluation if there’s no evidence of anemia (which would be picked up on a routine blood test). However, the fatigue and nervous system and gastrointestinal symptoms can precede anemia by months.

And patients rarely volunteer this information. For example, vegetarians and vegans should be regularly tested for possible B-12 deficiency.  But if your doc doesn’t know your eating habits, you won’t be tested.

In medical school, we’re taught that the U.S. diet is “plenty good enough to prevent any vitamin deficiencies.” To which I now respond, “Ha!” I agree most of us eat plenty of food (obesity levels are still on the rise). But it is often food whose nutritional value has been decimated.

3. There’s disagreement about normal levels of B-12.

This is true for many blood tests but the topic is B-12.

Most labs test B-12 levels between 200 pg/ml (picograms per milliliter) and 800 pg/ml. Someone at 250 pg/ml would be classified as normal, but symptoms can start appearing at 350 pg/ml. In Japan, normal B-12 was recently raised to 500 pg/ml and higher.

We see this type of erroneous over-reliance on “normals” in other frequently missed diagnoses. They include hypothyroidism, vitamin D deficiency, gluten intolerance, adrenal fatigue.

Folic acid or folate-containing foods without B-12 can mask a developing B-12 deficiency.

Folate will keep your blood count normal even if your B-12 is falling. But the folate will not protect your brain and nervous system.

For example, you’ll have no evidence of megaloblastic anemia (because of the folate). But your symptoms of numbness, tingling, balance problems, and emotional issues will continue unchecked. By eating so many folate-containing green vegetables, beans, and lentils, vegetarians and vegans inadvertently mask their own slowly developing B-12 deficiency.

It’s virtually impossible to take too much B-12. Any excess of this water-soluble vitamin is eliminated via urine. Nutritional guru Alan Gaby, MD, has commented that the only way too much B-12 will kill you is if you fill your bathtub with it and drown.

Foods high in B-12 are animal products: meat, poultry, seafood, dairy, and eggs, with eggs having the least. Because all animals store B-12 in their livers, eating liver is an excellent (though not particularly popular) treatment for B-12 deficiency. Your grandmother or great-grandmother likely remembers a time when her doctor told someone in the family to eat more liver.

People with low B-12 are likely to also have gastrointestinal symptoms that interfere with B-12 absorption.  The best way to quickly increase (and maintain) B-12 levels are:

In my own practice, a deficient patient receives a series of four B-12 injections (or four B-12 containing Meyer’s Cocktails) and also starts (and maintains herself on) a daily B-12 chewable tablet. Usually within a month, her levels are back to normal.

Dr. Edelberg, board certified in Internal Medicine in 1974, began incorporating alternative therapies into his practice during the 1980’s. Since founding the parent company of WholeHealth Chicago in 1993, he has become nationally recognized as one of the pioneers of integrative medicine, a new specialty combining conventional medicine with alternative therapies. He is the author of two books and numerous articles and is the editor of five books on integrative medicine.