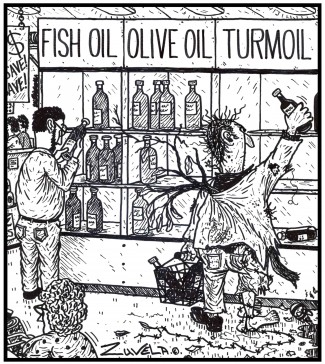 We’ve all heard claims about fish oil “curing” ADHD, but what does the latest research show? Mixed results, at best. Further study on fish oil and ADHD is warranted.

Make no mistake:  Every human brain needs essential fatty acids to function properly; so does the rest of the human body. But the question is this: Does fish oil supplementation actually diminish ADHD symptoms?

Following my last post on diet and ADHD, this post explains the latest research on ADHD and fish oil. It is reprinted here with permission of the author, David Rabiner, Ph.D. (To subscribe to his free newsletter, Attention Research Update, click here.)  Cartoon reproduced under paid license from Cartoon Stock.

Although medication treatment benefits an estimated 70 to 90% of children with ADHD, effective alternative treatments are needed for several reasons. First, even for children who respond well to medication, difficulties that need to be addressed often remain. Second, some children experience side effects that preclude the ongoing use of meds. Finally, most studies of stimulant medication treatment are relatively short-term, and data showing that stimulant medication improves long-term outcomes remain scarce.

One alternative treatment that has been studied in recent years is dietary supplementation of long-chain fatty acids. Certain long-chain fatty acids play an important role in many aspects of physical health, and may also influence a wide range of neuro-developmental and psychiatric conditions. For example, children with ADHD have been shown to have low blood levels of certain long-chain fatty acids, particularly omega-3 fatty acids. Because omega-3 fatty acids have been linked to several neurodevelopmental and psychiatric disorders, it has been suggested that increasing omega-3 levels via dietary supplements may enhance brain functioning and reduce ADHD symptoms.

Participants were 92 7-12 year old Swedish children diagnosed with ADHD; none were receiving stimulant medication. Children were randomly assigned to receive either 15 weeks of fatty acid supplementation with a formulation called PlusEPA, or, to the control condition where they received an identically appearing placebo capsule. Each PlusEPA capsule contained 500 mg of EPA (EPA stands for Eicosapentaenoic acid and is an omega-3 fatty acid) + 2.7mg of DHA (DHA stands for Docosahexaenoic acid and is another type of omega-3 fatty acid) and 10 mg of vitamin E. No adverse effects of EPA supplementation were reported.

Parents and teachers completed the short version of the Conners Rating Scale – a widely used measure of ADHD symptoms and oppositional behavior – at baseline and after 15 weeks of treatment. Comparing ratings for the treatment and control groups enabled the researchers to learn whether PlusEPA treatment yielded significant reductions in ADHD symptoms and oppositional behavior. EPA blood levels were taken at baseline and after 15 weeks so the researchers could learn whether change in blood levels was associated with change in ADHD symptoms.

The authors next tested for differences on the hyperactive, inattentive and oppositional scales within the parent and teachers measures separately. For the parent ratings, there was no evidence of any treatment effect for any of these scales. For the teacher measure, children receiving EPA supplementation had lower ratings of inattention after 15 weeks than control children. Although this difference was statistically significant, it was relatively small in magnitude.

The researchers compared EPA blood levels among children within the oppositional group to see whether they differed between those who responded to EPA supplementation and those who did not. Results indicated that responders had significantly lower levels at baseline compared to nonresponders. Differences at the end of treatment were not significant.

Results from this well-conducted study provide clear evidence that EPA supplementation is not a helpful treatment for a general sample of children with ADHD.

This conclusion is based on the finding that the primary outcome examined by the researchers – the sum of parent and teacher ratings on the Conners rating scale – showed absolutely no difference between treatment and control groups. There is thus no basis for recommending EPA supplementation as a general treatment approach for youth with ADHD.

However, follow-up analyses offer suggestive evidence that EPA supplementation may benefit youth with ADHD who are highly oppositional, especially if their normal blood levels of EPA are low. Among this subgroup, treatment with EPA was associated with significant reductions in teacher ratings of attention problems and oppositional behavior. Even within this subgroup, however, nearly 50% did not realize significant benefits and improvements in hyperactivity were not evident overall.

While results obtained for this subgroup of ADHD youth are promising, the authors acknowledge that the subgroup was not clearly specified apriori, but was instead constructed in an exploratory post-hoc analysis. This is a completely appropriate thing to do, but when significant treatment effects are obtained in post-hoc analyses, it is especially important to replicate the findings in a new sample to be more confident that it was not a chance effect. Thus, before too much credence is placed in this result, it would be important to conduct a new study of EPA supplementation in children with ADHD who are highly oppositional, and see whether the positive findings are replicated. If so, it would provide a reasonable basis for recommending this approach with such children.

In the meantime, this study does argue against EPA supplementation as a general treatment recommendation for children with ADHD. It is possible, of course, that other types of fatty acid supplementation would yield more positive findings, and it is important to recognize that the negative result reported in this study does not mean that other types of supplementation regimes may not be helpful. However, these findings do provide an important caution regarding the general efficacy of this approach and highlight the value of carefully conducted trials in establishing the efficacy of alternative treatments for ADHD.

15 thoughts on “Fish Oil and ADHD: What is The Evidence?”