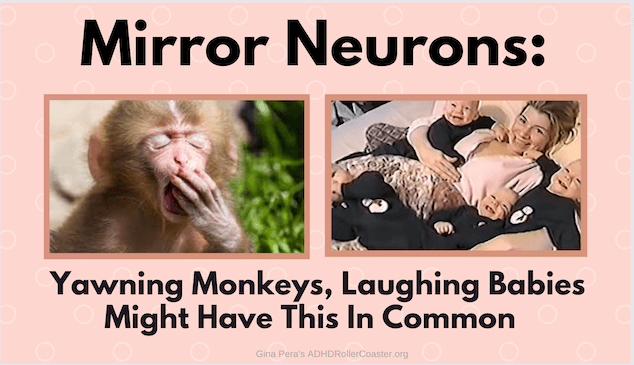 Empathy and mirror neurons. That’s the topic of this post, the first version of which I published in 2009.

It was inspired by two videos that went “viral” among my Facebook friends. For me, both illustrate empathy as an instinctual behavior, potentially linked to “mirror neurons”. In one, a baby dances—mirroring the dancing “Single Ladies.”  In the other, four babies laugh—contagiously.

Readers often ask me about ADHD and its potential impact on empathy. To begin to understand that knotty topic, we need to understand empathy basics.  Right now, it’s mirror neurons. Those two videos will help illustrate.  At the end of this post, I’ll share links to my other posts on ADHD and empathy.

My husband and I are watching a TV show. Suddenly, there’s a surprise twist—a car bashes into a tree, a bullet lands, a fist flies into a face.  A split second later, I will react as if that action happened to me. Because, in a sense, that’s how it feels.

Reactions vary: I might yelp or my arm will jump. Whatever my reaction, it both annoys and amuses my husband. He typically has no reaction at all.

Here’s the twist: I can suppress this empathic response if I am prepared for the action. But I can hardly anticipate a surprise, right?

Apparently, my mirror neurons are making themselves known.

Here is one definition:

A mirror neuron is a neuron [brain cell] that fires both when an animal acts and when the animal observes the same action performed by another.

Thus, the neuron “mirrors” the behavior of the other, as though the observer were itself acting. Such neurons have been directly observed in primate species. [More about that below.)

Consider the dancing baby above. Unable to stand without support. Presumably unschooled in “isolation” dance moves (e.g. moving head side to side). And yet, that baby Beyoncé wannabee still gets down.

Apparently, this baby possesses an extraordinary ability to “mirror” these dancers.

This reminds me of my husband and me taking Salsa dance lessons years ago:  I would look at the instructor and “mirror” her moves with my own body. My husband tried the same and—nada. He didn’t seem to see or feel what I was seeing feeling. I wasn’t consciously thinking how to follow the instructor. Rather, I sort of turned my brain off and let my muscles do the dancing.

What gives?  Given that he had yet to be diagnosed with ADHD then, there could be a variety of reasons, including coordination, working memory, performance anxiety of a sort, and so on.

But for me, mirror neurons seemed definitely at work.

Recently, I read with great interest Marco Iacoboni’s book Mirroring People: The New Science of How We Connect with Others

A leading neuroscientist, Iacoboni is part of the Italian scientific team that discovered mirror neurons in the brain. In other words, the team showed that empathy is brain-based. We hear a lot about “teaching empathy,” especially to children. But is that the correct term? We can teach the importance of compassion and empathy. But we can’t make someone “feel” empathic.

From the book’s product description: “From imitation to morality, from political affiliations to consumer choices, mirror neurons are relevant to myriad aspects of social cognition.”

This landmark book explains our remarkable human ability to get inside another person’s head. That is,  to know what he or she is thinking and feeling— even if we’ve never experienced those thoughts and feelings ourselves.

That last part is critical; we might commiserate with people who feel the same way we do, but that’s not empathy. (I’ll leave the experts to describe what that is exactly. Projection perhaps, or identification?)

Here’s the catch: Empathy is a universal human quality. But it’s a complex quality, and it is not equally distributed among individuals. That is, some humans are hardwired to be more empathic than others. Most notably, persons on the autistic spectrum experience a lower-than-average sense of empathy (at least of one type). But, in fact, you could say empathy itself is a spectrum condition.

Next, consider the laughing babies, below. These quadruplets chortle and even belly-laugh in unison. The trigger? Daddy’s funny noises. My husband quips, “Looks like Village of the Damned”.  Most people, however, find the quartet’s laughter infectious.

That video became famous when it won an America’s Funniest Home Video competition.

In a retrospective show on Oprah (The Laughing Quadruplets)—with the quads now 16 years old—the father describes the phenomenon as a “contagious-type laugh.”

Are these plentiful mirror neurons at play, connecting these babies with each other and their parents —and even the viewers at home?  Maybe so.

Are Humans More Empathic than Animals?

Hotz writes about the work of renowned primatologist Frans de Waal. If you’re thinking that humans are more empathic (or humane) than animals, de Waal says think again. He cites recent studies that “challenge the primacy of human logic and put animals on a closer behavioral footing with humans.”

Based on the studies of mammals, from primates to mice, de Waal proposes that empathy is an instinctual behavior exhibited by both lab rats and elephants. But de Waal’s aim isn’t merely to show that apes are transactional creatures with a basic understanding of reciprocity—but to reveal that the idea that humans are naturally calculating, competitive and violent is grounded in a falsehood willfully and selfishly perpetuated.

Throughout the book, de Waal illustrates how behaving more like our wild mammalian cousins may just save humanity. His contention, colored by philosophical musings and fascinating anecdotes of observed emotional connections between animals, argues persuasively that humans are not greedy or belligerent because animals are; such traits are far from organic or inevitable but patently manmade.”

In this TED Talk, above, Frans de Waal talks about his work.  At minute 8:40, he shares his experiment with monkeys.  You’ll find a transcript of the talk at this link:  Frans de Waal: Moral Behavior in Animals.

Excerpt from that segment:

So synchronization,which is part of that whole empathy mechanism,is a very old one in the animal kingdom.In humans, of course, we can study that with yawn contagion.Humans yawn when others yawn.And it’s related to empathy.It activates the same areas in the brain.

Posts on Empathy and ADHD

ADHD and Lacking Empathy: Was I Raising a Narcissist?