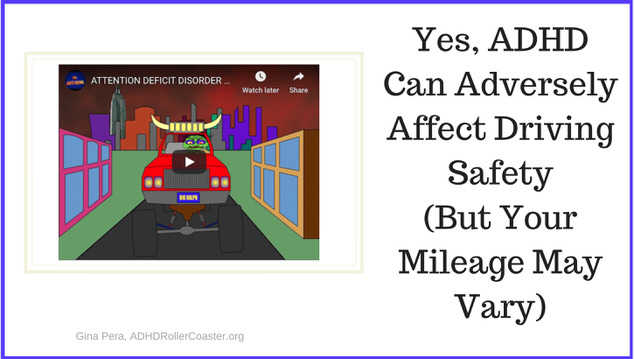 ADHD and driving: For many years, Adult ADHD researchers made it a top priority.  The evidence is clear: ADHD can impair driving safety. Also clear: Medication can improve driving skills.

As for this cartoon, count on it: Whoever created this “A.D.D. Man!” video also did his research on ADHD and driving. Perhaps first-hand research.

Load up the car with a bag of gallows humor, buckle your seatbelts, and watch out for Road Rage Ralph and Sally Soccer Mom! Click on the center arrow to watch the video below.

. It explores the various ways in which ADHD-related driving behaviors can sometimes challenge a relationship.

Driving While Distracted:  The Roller Coaster Hits the Road

My husband’s driving has improved since
taking medication. He no longer “punishes”
drivers who pass him—by flashing his lights,
making rude gestures, and yelling. I’d be so
embarrassed, I’d slink down in the seat.

Carol, married 15 years, says her husband is the absolute best driver ever: “At night, Ken notices little animals on the side of the road and has stopped for moose and deer that I never would have seen.”

Denise’s husband stopped for a moose, too—after he slammed into it at 50 mph. “He says it jumped in front of him,” she says, “but God help me, I wonder if Michael could have avoided the collision had he not been playing with the radio, fussing with the cell phone, adjusting the heat—all the things he does while not watching where he’s going.”

Hubby Michael also doesn’t connect the dots, for example, between speeding citations and higher insurance premiums. What’s more, if he gets one more ticket, he will lose his license and therefore his transportation to work. “But he can’t see the ‘big picture’ in anything,” Teresa says.

“White-knuckling it” is how Rory describes the experience of riding with her husband because, as she explains, “It used to be, if I was going to ride with Clint for more than 15 minutes, I took a nerve pill.”

After a particularly nasty road-rage incident, she put the brakes on riding as his passenger ever again; instead, whenever they rode together, she did the driving. He didn’t like it, but she valued her life too much to care. A few months later, she learned about ADHD, and “That explained a lot.”

Driving: A Most-Studied Area of ADHD

There you have it: Some adults with ADHD drive extremely well, some drive less well, and some downright menace our highways.

None of these stories—or the many others shared in my free online support group for partners of adults with ADHD—surprise the researchers who’ve made driving one of the most heavily studied facets of ADHD in teens and adults. These researchers have gathered mounds of data demonstrating that ADHD’s driving-related deficits are real—and even life-threatening. What’s more, they’ve shown that adults with untreated ADHD often remain unaware of their driving challenges.

Consider the results of one 2005 study by a pioneering researcher in this area, psychologist Russell Barkley, and colleagues. Echoing many other studies, the group diagnosed with ADHD showed these outcomes:

Despite their quantifiably poorer performance when compared to a control group, the adults with ADHD in this study thought they did just fine.

Of course, plenty of people with ADHD prove to be excellent drivers, and many dangerous drivers do not have ADHD, cautions Daniel J. Cox, a professor of psychiatry at the University of Virginia Health Sciences Center. Author of more than 170 scientific articles, he has extensively researched driving safety and how disorders such as ADHD, alcoholism, Alzheimer’s, and diabetes affect it.

By and large, though, when it comes to untreated ADHD, the preponderance of evidence suggests critical, even life-threatening, disruption.  This is definitely an area worth paying attention to. It can adversely affect relationships and life itself.

The good news: Medication treatment has been shown to vastly improve driving safety in study subjects with ADHD. But it has to be in effect while you’re driving. That means during the morning and afternoon commutes.

If you or your partner has ADHD, do you find it’s affected driving safety?

How does it affect your relationship?

30 thoughts on “Driving While Distracted: Adult ADHD Hits the Road”