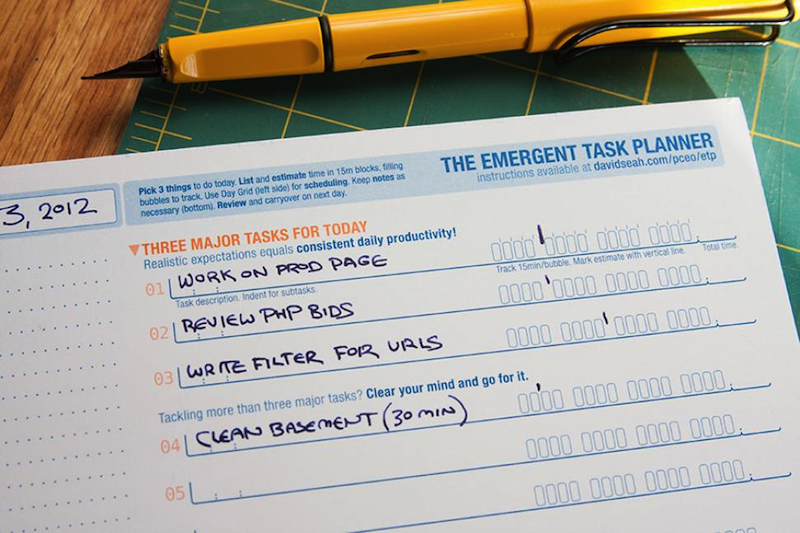 Do “to-do” lists numb your neurons? Or worse, further scatter your thoughts and objectives?  Yeah, me, too.

Fortunately, there are novel alternatives to the traditional to-do lists, and they work for everyone, not just people with ADHD.

I purchased several sizes, and each was met with delight from the lucky winner (and later reports of actually being used):

Today, I went to re-order a few, and my Google search led me to the website of the planners’ inventor, David Seah, who writes about the system here.

David also shares a free download of another intriguing tool for project-based to-do lists. He calls it “The Task Progress Tracker.” As he writes:

One of the awful things about to-do lists is that you feel reward only when everything is checked-off. This is a distressingly-rare event, and you start to feel bad about not working fast enough.

To free myself from this trap, I made the Task Progress Tracker (TPT). It tracks effort in a useful way, not just done-ness. It also provide a “big picture” view of a project, which helps avoid the ickiness of micro-management. It’s an “I did” list, not a tyranical “to do” list.

The TPT is designed to provide an overview of a project and its subcomponent steps, focusing on problem solving rather than mechanical task completion. It does this by tracking time spent, not tasks completed. This allows you to be mindful at the “intention” level as you work toward solving your problem, which is appropriate when pioneering new processes or doing fundamental research. So long as you’re working, that’s great.

To-do lists have their place as pre-flight lists and reminders. They are also workable for tasks that you know how to complete. When tackling something new, creative, or unknown, I don’t think they don’t work as well; they are like the untrained boss who bugs you every five minutes for results, without caring about how you get them. It’s oppressive!

Down with oppressive to-do lists! Thank you, David!

6 thoughts on “Down With Tyrannical To-Do Lists!”