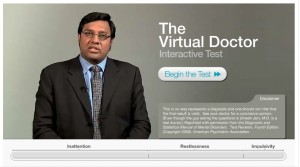 Now that you’ve learned the basics of pursuing an evaluation for ADHD (in this post below), are you still wondering if it’s the right thing for you to do?  Here’s a wise idea: Take a screening test — a set of preliminary questions that can say that yep, you’re a worthy candidate for a full professional evaluation.

Here is one of the best interactive guides I’ve seen, featuring well-known Canadian ADHD expert Umesh Jain MD, PhD, MEd., Just click on the image above, and you’ll be taken  to  The Virtual Doctor Interactive Test at the website for TotallyADD.  Once you’ve finished the quiz, definitely take a look around the site. You don’t even need to have ADHD to appreciate the high-quality videos created by the team in charge, including two professional entertainers who are….TotallyADD.

Totally ADD was founded in 2009 by Rick Green, Dr. Umesh Jain, and Ava Green, and is a division of Big Brain Productions, a privately-owned company based just west of Toronto, in Mississauga, Ontario, Canada.

Canadian writer/director/actor Rick and video story editor Ava (no surprise they’re married!) created Big Brain Productions in 2008 and together produced the GlobalTV documentary ADD and Loving It?!, featuring Canadian actor Patrick McKenna.  The film is an inventive and often hilarious look at adult ADHD – not a surprising approach considering Rick and Patrick worked together on one of Canada’s longest-running and most popular comedy television series, The Red Green Show.  Both Rick and Patrick have been diagnosed with ADHD (Rick several years ago after his son was diagnosed, and Patrick in the course of making the documentary) and they share candid stories of life while  untreated and undiagnosed, and how they’re successfully coping now.

As one expert points out in the documentary, ““No other diagnosis brings with it so much good news and possibility for treatment.”  For his work as the film’s creator, writer, and director, Rick was honoured with the prestigious ‘Celebrity Changing Lives’ award from the CAMH Foundation.

4 thoughts on “Doc in a Box: Interactive ADHD Screening Test”