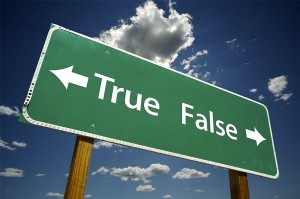 True or false? Fact or “neuromyth”? Individuals learn better when they receive information in their preferred learning style (for example, visual, auditory or kinesthetic).

This axiom has long been accepted as a “truism” in education. It’s even been fervently promoted by certain self-proclaimed ADHD experts.  But is it true?  The evidence says no.

In fact, many other long-accepted “truisms” in education are being called up short by neuoscientific inquiry. At least one group of researchers is lamenting

These factors and more contribute to educators continuing to base their teaching philosophies on incorrect assumptions—”neuromyths,” the researchers call them. One surprise in the research: Participants who showed greater general knowledge of the brain also were more likely to believe in the neuromyths. (The exception: participants who read popular-science magazines.)

An added risk comes when these neuromyths come in commercialized products marketed to educators, such as Brain Gym. An excerpt from the researchers’ paper in Frontiers in Psychology:

Some of these misunderstandings have served as a basis for popular educational programs, like Brain Gym or the VAK approach (classifying students according to a VAK learning style). These programs claim to be “brain-based” but lack scientific validation (Krätzig and Arbuthnott, 2006; Waterhouse, 2006; Stephenson, 2009; Lindell and Kidd, 2011). A fast commercialization has led to a spread of these programs into classrooms around the world.

Paul Howard-Jones, an associate professor of neuroscience and education at Bristol University in the United Kingdom, and other researchers in five countries queried teachers participants via an online survey containing 32 statements about the brain and its influence on learning; 15 of the statements were neuromyths.

Here are seven of the neuromyths (the full list is presented below) that the researchers contend “have persisted in schools and colleges [and are often] used to justify ineffective approaches to teaching”:

According to the researchers’ paper in Frontiers in Psychology: “This study examined general knowledge about the brain and prevalence of neuromyths among teachers in specific regions of the UK and the NL. It additionally investigated a range of candidate factors that might be associated with these outcomes”

The results indicated that, overall, teachers believed half of the presented myths. Moreover:

Here is the list of items presented to study participants. A “C” or “I” after the statement indicates whether it is Correct or Incorrect.

2. Children must acquire their native language before a second language is learned. If they do not do so neither language will be fully acquired (I).

4. If pupils do not drink sufficient amounts of water (=6–8 glasses a day) their brains shrink (I).

5. It has been scientifically proven that fatty acid supplements (omega-3 and omega-6) have a positive effect on academic achievement (I).

6. When a brain region is damaged other parts of the brain can take up its function (C).

8. The left and right hemisphere of the brain always work together (C).

10. The brains of boys and girls develop at the same rate (I).

11. Brain development has finished by the time children reach secondary school (I).

12. There are critical periods in childhood after which certain things can no longer be learned (I).

13. Information is stored in the brain in a network of cells distributed throughout the brain.

14. Learning is not due to the addition of new cells to the brain (C).

16. Learning occurs through modification of the brains’ neural connections (C).

17. Academic achievement can be affected by skipping breakfast (C).

18. Normal development of the human brain involves the birth and death of brain cells (C).

19. Mental capacity is hereditary and cannot be changed by the environment or experience (I).

21. Environments that are rich in stimulus improve the brains of pre-school children (I).

22. Children are less attentive after consuming sugary drinks and/or snacks (I).

23. Circadian rhythms (“body-clock”) shift during adolescence, causing pupils to be tired during the first lessons of the school day (C).

25. Exercises that rehearse co-ordination of motor-perception skills can improve literacy skills (I).

26. Extended rehearsal of some mental processes can change the shape and structure of some parts of the brain (C).

28. Learning problems associated with developmental differences in brain function cannot be remediated by education (I).

29. Production of new connections in the brain can continue into old age (C).

30. Short bouts of co-ordination exercises can improve integration of left and right hemispheric brain function (I).

31. There are sensitive periods in childhood when it’s easier to learn things (C).

Neuromyth assertions are presented in italic; C = correct; I = incorrect.

You can read summaries of the researched posted at The New York Times and Minnpost.com. The full article in Nature can be accessed via subscription or single-purchase here.