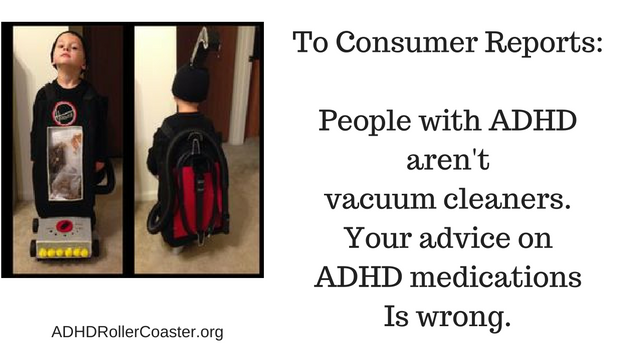 You might turn to Consumer Reports when it comes to purchasing appliances or even automobiles. Yet, would you trust them for ADHD-related medical advice? I certainly hope not.

Let me explain, in this updated version of my post from 2009.

CR: “Parents, be skeptical of free samples from your doctor”

A July 8, 2009 press release from Consumer Reports caught my attention. I grew concerned that mental healthcare consumers would be forced to accept cheaper—but inferior—generics instead of more reliable brand-name medications.

Next thing I knew, Consumer Reports has followed it with equally misguided information and advice on ADHD.

The 2009 press release from Consumer Reports starts with this:

Parents should be skeptical if their doctors offer them free prescription drug samples, especially for the treatment of attention deficit hyperactivity disorder (ADHD). Free samples can hook consumers on high-priced brand name drugs that are not any better or safer than less expensive generic medicines.

Note the lurid term “hook” when speaking of ADHD medications. I can make no sense of it. How can you get more “hooked” on a brand medication but not the generic?  That’s ridiculous.

This sets the tone for the skewed information that follows, including this:

Consumer Reports Best Buy Drugs notes that many young patients who take ADHD drugs either do not have ADHD or have only  mild symptoms.

No research or data is cited. So, what is the motivation for CR to issue this ADHD-stigmatizing disinformation? I wondered that, too.

The Trouble with Generic ADHD Rx

Back to the generics vs. brand medication issue. We know that generic stimulants and other psychoactive medications are absolutely not the same as brand. They might work well for some people, but they do not work as the brand works. that’s the difference.

I addressed this topic in this and other follow-up posts: Update on Generic Rx: Approach with Caution

Yes, sometimes generics work okay for some people. When it comes to affordability, sometimes it’s the only  option.  For many other people, however, they create more side effects and cause them to stop treatment altogether.

One workaround: Try the brand name of the medication to make sure it works for you, before switching to generic. At  least, you will have then eliminated one variable. 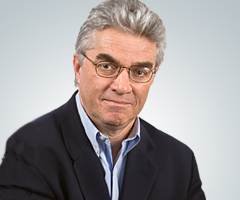 From this perspective, he claims  you don’t need expensive medications such as Concerta, Adderall XR, and Strattera. (You know, the medications that might have made all the difference in your world).

He says you will do just as well with generic dexedrine and methylphenidate. (You know, the medications that give many folks the heebie-jeebies or other intolerable side effects—even if they work well for others.)

When you try only generic medications, you add a whole other layer of problematic complexity.

The Grinches That Stole Clarity

Santa and his Consumer Reports elves, it seems, want to be the Grinches that Stole Clarity. Their over-arching goal? Santa Claus-sized cost-savings for states.

Omitted from their calculations: The long-term costs they risk in leaving ADHD untreated or poorly treated. Even worse, the short-acting medications they favor are more likely to be abused (not typically by people with ADHD but others).

Can people with multiple advanced degrees truly be this bone-headed? Or is this willful denial of the facts?

Whatever the case, this is also a problem in some countries where nationalized health systems based treatment decisions on cost alone. Just ask adults with ADHD in Australia (those that managed to get a diagnosis) about their experiences with generic dexedrine.

Recapping Problems with Generics for ADHD:

Here are just a few reasons why generic medications for ADHD can be problematic:

Then there’s the pesky matter of having to remember to take four or more short-acting pills daily. For children, this often involves trips to the nurse’s office and enduring stigma because of it.

Branded drugs and their generics almost always contain different dyes, fill materials and binding. These are ingredients to which many people are allergic or have other adverse reactions.

(I have no scientific proof, but abundant anecdotal reports indicate that people with ADHD seem more prone to these sensitivities.)

Imagine what happens when your pharmacy changes suppliers on a regular basis (and this happens at many pharmacies). First, know that different manufacturers will have variable amounts of the active ingredients. More to this point, however, imagine no one clueing you into the filler potentially being the problem and not the medication—or some “unmasked” co-existing disorder, such bi-polar. Talk about neurochemical roller coasters!