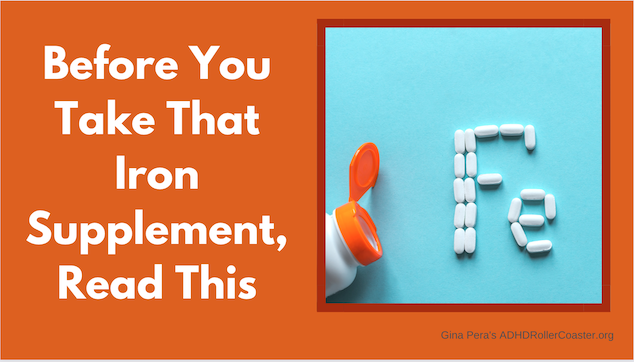 Preliminary research shows that treating ADHD with stimulant medication can normalize the ability to uptake iron already in the diet. The study called into question the routine recommendation of iron supplements for people with ADHD.  In fact, iron supplementation might be dangerous.

This comes as a notable counter to what we’ve heard for years. For example, this 2004 paper in Jama Network:

Conclusions  These results suggest that low iron stores contribute to ADHD and that ADHD children may benefit from iron supplementation.

I’ve also heard the anecdotes for years. Many parents give iron supplements to their children with ADHD. They hear that ADHD is associated with low iron, so they supplement it. Some adults take the supplements, too, often for Restless Legs Syndrome — and typically at their physician’s direction. But, in either case, are iron levels well-monitored and are other causes considered?  Unclear.

Iron Deficiency or Poor Uptake to the Brain?

My husband is the credentialed scientist in our house. He is a molecular biologist by training and profession. But he contends I have strong scientific instincts. I can’t always substantiate my hunches. My scientific education and vocabulary is relatively meager. But sometimes my hunches are eventually proven correct.

As I learned first-hand, genes can affect how efficiently we assimilate various minerals, including magnesium. Years ago, I finally discovered my severe magnesium deficiency. Once corrected, it made all the difference in life for me. Cognitively. Energetically. Allergies. You name it.  I wish I’d known this when it might have been helpful to my father (the suspected “genetic donor) and his siblings. Many had classic signs of magnesium deficiency.  (National Institutes of Health Magnesium Factsheet)

One example: The TRPM6 gene  is involved in magnesium uptake in the kidney. The T allele of the SNP in TRPM6 that is found in approximately 92% of Americans increases the risk for hypomagnesemia by 20%, one study found.  (New TRPM6 mutation and management of hypomagnesaemia with secondary hypocalcaemia)

I do my best to keep up with ADHD-related scientific research. That’s how I came across this paper:  Multimodal MR Imaging of Brain Iron in Attention Deficit Hyperactivity Disorder: A Noninvasive Biomarker That Responds to Psychostimulant Treatment?

I contacted the lead researcher, Vitria Adisetiyo, PhD. She responded this way:

This is consistent with your hypothesis, Gina, that the issue in ADHD may not be insufficiency of blood iron in the body but rather a problem with its absorption into the brain since abnormal brain iron levels were detected in the medication-naïve ADHD patients even when blood iron levels were normal.  We also measured peripheral blood iron measures in the ADHD patients and controls and found no significant differences.

So yes, as it turns out. The routine iron supplementation for people with ADHD might merit re-assessment.  Moreover, taking a stimulant medication might be more prudent than taking iron supplements when the intended effect is on ADHD-related symptoms.

Thank goodness for scientific researchers. They study arduously for years in order to be able to painstakingly tease out answers on such topics.

Here is an excerpt from  the Medscape report on the research (Brain Iron Levels a Potential ADHD Biomarker):

Children with attention-deficit/hyperactivity disorder (ADHD) have reduced iron levels in the brain, which normalize with stimulant medication, the research suggests.

Investigators at the Medical University of South Carolina Center for Biomedical Imaging in Charleston found that medication-naive patients with ADHD had significantly lower brain iron levels compared with their counterparts who had been receiving psychostimulant medication.

Study Replication In the Works

It is important to remember: This is preliminary research, and the article points out potential limitations with this study.

This is how science works: incrementally.

Dr. Adisetiyo and colleagues are currently launching an attempt to replicate their findings. Eventual plans include conducting a larger longitudinal study examining brain iron levels before and after use of psychostimulant medication in children and adolescents with ADHD.

In the meantime, please be cautious with supplements that, in excess, can cause significant problems.

An earlier version of this post appeared on June 29, 2014

Have you experimented with iron supplements? Your comments welcome.

8 thoughts on “Can Stimulants Normalize Iron Uptake in Individuals with ADHD? Maybe”