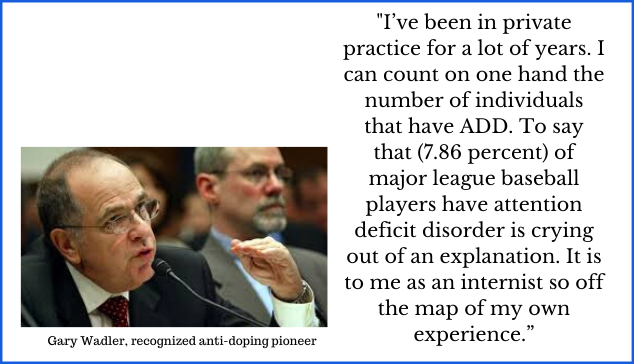 A physician with the World Anti-Doping Agency contends that ADD (as he calls it) is being overdiagnosed in major-league baseball. More importantly, Dr. Gary Wadler says, it is over treated with medication. On what does he base this? The fact that he has rarely diagnosed the condition throughout his career.

Fail to see the logic? Me, too.

Just when I think this blog can move on to topics other than ADHD medical treatment, another flagrant show of ADHD ignorance makes the headlines. We just can’t let it go without a counter.

You know those physicians-in-denial-about-ADHD that Dr. Charles Parker wrote about last time (When Physicians Have ADHD Denial)? This physician serves as a good example.

He’s sounding the alarm that nearly 8 percent of major-league ball players were allowed to use the otherwise-banned stimulant medications for ADHD last season. (That means 106 exemptions for banned drugs.) But, hey, that sounds like a reasonable percentage to me. As I reported in Is It You, Me, or Adult A.D.D.?:

One comprehensive survey concluded that about 4.4 percent of the U.S. adult population age 18-44 has ADHD. But that’s a very conservative estimate. Many researchers suspect the true adult population with ADHD lies closer to 10 percent—and possibly as high as 16.4 percent. It all depends on how broadly the diagnostic criteria are applied.

In fact, some people speculate that ADHD, particularly the hyperactive subtype, is over-represented in sports such as baseball. So, this 8 percent figure might actually represent under-diagnosis.

“This is incredible. This is quite spectacular”

At any rate, this internist was quoted in today’s AP story by Ronald Blum, “Stimulant exemptions in baseball on the rise”:

“This is incredible. This is quite spectacular. There seems to be an epidemic of ADD in major league baseball,” said Dr. Gary Wadler, chairman of the committee that determines the banned-substances list for the World Anti-Doping Agency.

He recommended an independent panel be established — WADA recommends at least three doctors — to review TUE requests in what he termed “a sport that grew up on greenies.” (note: That’s slang for amphetamines.)

“I’ve been in private practice for a lot of years. I can count on one hand the number of individuals that have ADD,” he said. “To say that (7.86 percent) of major league baseball players have attention deficit disorder is crying out of an explanation. It is to me as an internist so off the map of my own experience.”

And that’s the sad truth. Too many physicians fail to keep up with the literature after they graduate from medical school. I just wonder how many times Dr. Wadler missed ADHD in his patients — because he didn’t know what to look for. And, rather than learning more now, he apparently is digging in his heels. Let’s just hope this “independent panel” he seeks includes physicians who keep abreast of things.

Sure, “doping” in athletics is a complicated issue. But Dr. Wadler fails to appreciate the complexity he is attempting to manage. Careers could be lost, all for the lack of decision-makers’ medical knowledge. 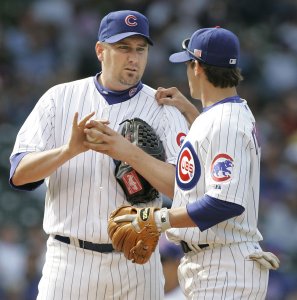 The Rare Athlete Speaking Out on ADHD: Scott Eyre

Years ago, Phillies’ southpaw Scott Eyre did a great service for both his sport and ADHD awareness by speaking publicly about how his own ADHD came to be diagnosed and how treatment has made a difference in his performance. Here’s an except from an article in Additude magazine (“A Role Model on the Mound”):

Formerly a guy who talked nonstop and made coaches and teammates irritated and nervous, a guy who was described by a former teammate Dan Plesac, now a Philadelphia Phillie, as being “a 33 record playing on 45 speed,” he’s now calm, collected. His manager, Felipe Alou, puts him into a game to right things when they are at their most chaotic and tense — and when the outcome is on the line.”

I’m no diagnostician, but that sure doesn’t sound like the behavior of a “speed freak” to me.

It’s hard to pin down the origins of the word “doping,” but it seems professional sports needs to come to grips with what we’ve learned about the role that dopamine, a brain chemical, plays in ADHD. Until they do that, representatives such as Dr. Wadler just sound, well, dopey—and dangerous.

I welcome your comments.
—Gina Pera