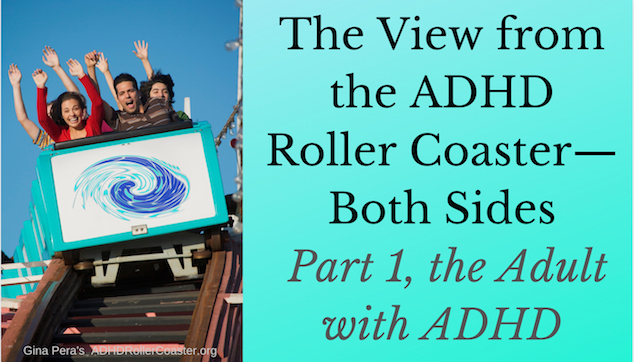 Why do I use the term ADHD Roller Coaster? That’s easy. For almost 20 years, the people attending my discussion groups in Palo Alto, California—one for adults with ADHD, and a separate one for the partners of adults with ADHD—have used that term to describe their lives.

To explain, I offer the full introduction, in two posts, from my book Is It You, Me, or Adult A.D.D.? Stopping the Roller Coaster When Someone You Love Has Attention Deficit Disorder

What’s on tonight’s agenda? The Next Big Thing in high-tech? Not exactly. Not unless you have adult ADHD (Attention-Deficit/Hyperactivity Disorder). In that case, keeping track of your keys can be a very big thing
indeed.

Phillip,* 32, a talented software programmer with a beautiful smile and an engaging personality, begins: “Okay, I’ve been practicing some of the suggestions we talked about last time for keeping track of my keys, and I can’t believe how well they’re working.” No one snickers. No one rolls their eyes. Most people attending this support group for adults with
ADHD chuckle and nod in agreement, relieved to hear someone speak openly about an embarrassing problem that they, too, have, or a problem similar to theirs.

(* Not his real name. Descriptions of activities and individuals throughout this book are drawn from composites created from multiple accounts.)

Even in Silicon Valley, “New and Novel” Isn’t Enough

Make no mistake: Silicon Valley might be a worldwide magnet for people with ADHD, what with their stereotypical love of the new and novel. But even here, ADHD is not limited to young men who tinker in high-tech, and its challenges aren’t limited to lost keys.

The people gathered tonight—male and female, professionals and blue-collar workers, teens and retirees, long-time locals and new immigrants from many different nations—find themselves dogged by a few or many of these other difficulties:

As you would expect, such behaviors like these seldom won them kudos from bosses, coworkers, family members, or even grade-school teachers. As a result, some people have lost jobs, partnerships, houses, large fortunes, and self-worth. Or, at best, they believe (or have been told often enough) they have fallen far short of their potential.

Some have unsuccessfully received for anxiety or depression for years—without knowing that, in fact, untreated ADHD was making them anxious or depressed. (Misdiagnosed with Depression Until 39: “Best Week of My Life.”)

“I Always Knew I Was a Bit…Different”

Many of these late-to-diagnosis adults have long suspected that they were a bit “different.” When they finally learn about ADHD, most wish they’d learned sooner. Much sooner. It explains a lot about how their unwitting actions generated unpleasant consequences as well as why, just when they started getting traction in life, they’d often slip on that invisible banana peel.

Meanwhile, tonight, as these adults share their triumphs and difficulties, ones that their families and the public frequently fail to understand or accept, you can almost see the lightbulbs flashing on. Apprehensive newcomers relax their jaws. Arms unfold. Possibilities expand as they realize that they are not alone, that other smart people, accomplished people, well-meaning people ride the same roller coaster.

They begin to realize they’re not “lazy, stupid, or crazy,” as that breakthrough ADHD book title goes. Most important, they learn that practical solutions exist for helping them optimize their abilities. For many, this is the only gathering where they feel truly understood. But if you stumble on this group while looking for the Toastmasters meeting down the hall, and if you stay awhile to listen and watch, you might wonder why these “normal-looking” adults have never picked up certain “mature adult behaviors,” like getting organized or getting to bed at a decent hour. You might ask yourself:

The Core of the ADHD Roller Coaster

The short answer: Adult ADHD challenges have little to do with intelligence, caring, the lessons their parents tried to teach, or what they know to be right or wrong. It has more to do with

As one prominent ADHD expert, psychologist Russell Barkley, says, “The challenge is not not-knowing what to do. It’s in doing what you know.”

Instead of calling it an attention-deficit disorder, we could call it an intention-inhibition disorder. That’s because it’s a condition in which the best intentions go awry.

If you’re an adult with ADHD, can you relate to this group? Do you remember the first time you realized something along these lines: “Hey, it’s not just me who has these ‘quirks,’ and it’s not my personality, and they don’t come from dark motives in my subconscious, etc. I have ADHD”?

Next time: The view from the ADHD Roller Coaster – both sides – part 2  (the partners of adults with ADHD).