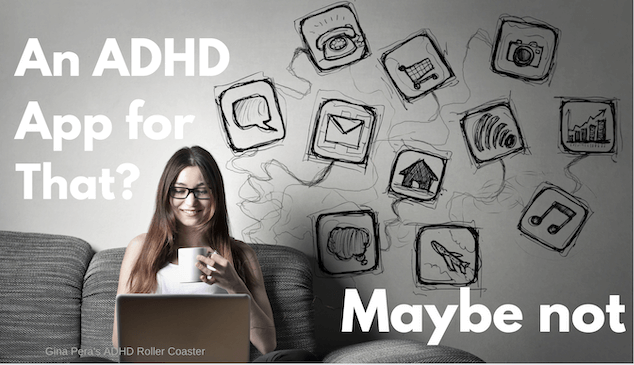 A team of researchers conducted a systematic review of apps (mobile applications) marketed as useful for ADHD — and found no evidence. At all.

Hold on!  Obviously, many people with ADHD find apps useful for various purposes.  If anyone knows this, it’s me.  I’ve led an Adult ADHD discussion group for 15 years here in the heart of Silicon Valley!

When we talk about creating “external supports” for Executive Functions, yes, our omnipresent devices can often do that in various ways.  When they aren’t distracting us. In fact, I asked a late-diagnosis woman with ADHD,  Andie Katschthaler, to share the secrets of her #ADHDTechStack with my readers.

Right now, though, we’re talking about evidence for ADHD-specific apps. That is, these are apps marketed to people with ADHD on the basis of being ADHD-informed. They peddle claims about diagnostics and treatment. But they offer no supporting evidence to these claims. Yes, that matters.

Increasingly, the Internet bursts with marketing to people with ADHD. Constantly, new  “influencers” and “health sites”mine sought-after keywords for search-engine-optimization.

Do you know who is financially supporting many of these efforts?  You might be surprised. Some day, I will write that manifesto. But first, my husband says, we’ll need a security budget. Ha.

To be clear: This is not a “let me show you how to turn on your iPhone, Okay Boomer” moment. This is about claims and proof.

Now to the research on ADHD apps.

Please note: with new posts I’ll be adding all the links at the end. Less distracting.

A Quick Take on Research Methods:

The team of researchers based in Bulgarian and Swedish universities used these methods and parameters:

Of the 355 apps researchers found, they included 109 apps in the study.  The majority were marketed for treatment with ADHD.  Some, however, claimed usefulness for ADHD symptoms assessment. Some claimed both.

The team’s literature search identified 51 papers on the topic of ADHD apps.  Only one, however, met the research inclusion criteria—and it came one year after the established timeline of 2017.

There is no overlap between evidence in the literature and apps on the market.

Given the large proliferation of mental health apps and their potential benefits in terms of dissemination and costs, future research needs to be conducted in order to establish the safety and efficacy of ADHD apps available on the commercial market.

Getting and Staying Organized: My ADHD Tech Stack

What do you think about apps to support people with ADHD? Have you found one particularly helpful?

Do you think apps purporting to diagnose or guide ADHD treatment should be based on evidence? Or does anything go with apps, as with the Internet.

6 thoughts on “ADHD Research: No Evidence for Diagnostic or Treatment Apps”