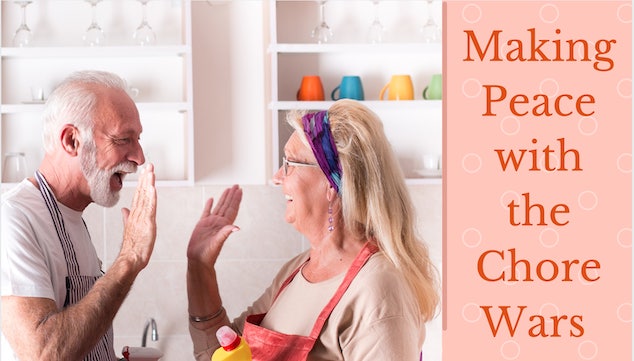 Let’s consider a major bone of contention in many ADHD challenged relationships: Chore sharing. Arguing won’t help. Neither will nagging. Instead, we need an ADHD-informed strategy.  Let’s keep it very simple.

In most attempts at ADHD couple therapy, what is missed?  Instruction and guidance on developing practical, cooperative strategies.  This is a major theme in the couple therapy book I wrote with psychologist Arthur L. Robin, PhD:  Adult ADHD-Focused Couple Therapy: Clinical Interventions.

More focus on creating external supports for  Executive Functions. Less “talking through” these typical ADHD couple conflicts. In fact, talking about them often exacerbates the problems!

Psychologist, coach, and ADHD expert Michele Novotni is the author of What  Does Everybody Else Know That I Don’t?: Social Skills Help for Adults with Attention-Deficit/Hyperactivity Disorder.

Below, she offers this streamlined advice for you and your ADHD partner to start establishing priorities about tasks and chores.

Remember: You’re On the Same Team

“I want my husband to understand that I don’t do it on purpose. He thinks that I ‘forget’ to close the cabinets or ‘forget’ to put something away on purpose.”

Ginny, a client in my group for adults with ADHD, was sharing her frustrations over living with a husband who doesn’t have ADHD.  Her ADHD-specific need for relationship advice is common, especially when it comes to domestic tasks.

Alan, who nodded in agreement, added, “I wish my wife understood how hard I’m trying. She just doesn’t get how much effort it takes for me to do things that come easily to her.”

Those two comments opened the floodgates. They spurred a lively group discussion about the challenges of marriage when ADHD is involved.

When I met with some of my clients’ partners—many of whom don’t have ADHD—they had their own frustrations:

All couples must navigate challenges and learn to communicate effectively and work cooperatively, but ADHD can place particular strains on a relationship. Many of my adult clients with ADHD report having partners who are so highly organized that they refer to them (jokingly, of course) of having Attention Surplus Syndrome, or ASS. Over time, it seems, the “opposites-attract” qualities that originally drew the two to each other lose their appeal.

When a relationship hits a rough patch, I advise couples to focus on each other’s strengths, not their weaknesses. I tell them to think of themselves as a team.

Every winning team needs a variety of skill sets to make it work—players who can execute a detailed game plan in a timely manner as well as those who inspire with their high energy and spontaneity. A football team comprised entirely of quarterbacks won’t win on game day.

Gauging a couple’s responsibilities and needs—both of which may have changed over the years—is a productive way to start.

One strategy for doing this is describing—on a scale of 0-10—how important or exhausting a task is for each of you. For example, instead of telling your partner how hard it was for you  to organize the holiday party, say, “It was a 10—or even an 11—to put that party together.”

Couples often express surprise at the results of this rating game. One couple found that having downtime after work was low in the husband’s list of needs. By contrast, his wife rated getting early-evening help in the kitchen a 10. The result? The husband helped with dinner prep the second he got home from the office.

Ginny and Alan went home and discussed with their partners the degree of energy that various tasks demand of them (again, on a scale of 0 to 10). Each of their partners was genuinely surprised at the effort required to complete some tasks he or she had thought were effortless. They also discussed the relative importance each accorded a given task. This gave Ginny and Alan a clear sense of what was important not only to them but also to their spouses.

Armed with this information, each couple renegotiated responsibilities. For example, Ginny was surprised to learn that her husband didn’t care about eating the gourmet dinners she threw herself into after work  (he scored it a “3”). His preference by far:  having an uncluttered family room (a whopping “9”).

Ginny and her husband did agree completely on one important area:  Each gave a “10” to wanting to be loved and appreciated for themselves.

Breaking Out of ADHD Relationship Dysfunction — After Not Breaking a Fall