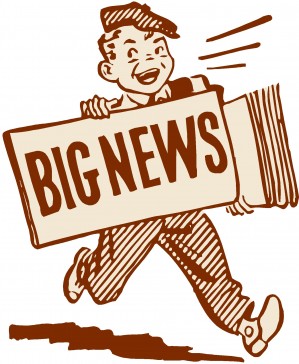 Welcome to a new department here at the ADHD Roller Coaster blog: ADHD in the News Monthly Roundup.   In this spot,  you’ll find links and summaries to key ADHD-related news stories, starting now with the March 2010 headlines. (Please note: Some sources might require registration or a fee.)

Summary: An estimated 140 million Americans, most of them covered by employer-provided group insurance plans, are the beneficiaries of a new federal law designed to guarantee mental-health parity in insurance coverage.  In other words, the brain is finally being acknowledged as a physical body part!

Denise Camp was resigned to the double standard that had long applied to her medical bills, forcing her to skimp on other expenses so she could pay for mental health treatment.

While visits to her internist for physical problems required a $20 co-pay, her weekly therapy sessions with a social worker cost $50 and trips to the psychiatrist who prescribed her medication were $75.

similar disparity applied to medicines: Drugs to treat the crippling depression that ended her engineering career cost her twice what she paid for an antibiotic. Click here to read the rest of the story.

Mouse Model Reveals a Cause of ADHD

Although it’s typically considered an adolescent curse, ADHD actually affects about five percent of adults as well. New research in a mouse model of attention deficit/hyperactivity disorder suggests that the root of the psychiatric disorder might be the over-activity of a protein that regulates dopaminergic pathways. The work suggests a path toward new treatments for symptoms including inattentiveness, over-activity and impulsivity.

The cause of ADHD is unknown, but there is increasing evidence that dopamine, a neurotransmitter involved in the brain’s reward-motivation system, is involved. Scientists have found that the level of dopamine, and the D2 receptor it binds to, are involved in the progression of ADHD, as well as four connected regions in the frontal region of the brain, two of which are directly linked to reward and motivation. Click here to read the rest of the story.

Summary: Sensory Integration Disorder (SID) is commonly associated with ADHD, but some see it as a separate condition meriting inclusion in the next revision of psychiatry’s guidebook: the Diagnostic and Statistical Manual (DSM).  In my experience, SID is one of those conditions that desperately needs more cross-disciplinary awareness (similar to auditory processing disorder and sleep apnea). If an occupational therapist identifies the problem as sensory integration disorder, the underlying ADHD sensory-processing problems might not be recognized.

Ana can sit on the couch for only about five minutes before it’s time to move. First, she rides her bright blue unicycle a few times around the dining room table. Then she gets on a swing hung from the doorway and pumps until her feet can touch the ceiling.

A few minutes later she’s doing laps around the table on her RipStik – a skateboard-like balance board. Then she runs outside and climbs the back fence (more fun than going through the gate), to jump on a trampoline. After mastering a flip, she manages to climb back into the house through an open window. Life with Ana, who turns 11 this month, is action-packed.

The fifth-grader has sensory processing disorder – her brain doesn’t process information from her five senses in a typical way – leaving her unable to sit still (her muscles just have to move), wear socks (they’re too irritating), concentrate in a busy classroom (so much to look at and hear),  or be in the same room with a hot pizza (the aroma is overpowering). Click here to read the rest of the story:

Handbook suggests that deviations from ‘normality’ are disorders

Summary: Columnist George Will suggests that, well, what exactly does he suggest?  I’m not sure, but I think he’s contending that brain disorders are just excuses for immoral behavior but it’s a good thing that Mozart wasn’t  medicated into “barren normality.”

In a 1983 novel, he spotted the tendency of America’s therapeutic culture to medicalize character flaws: “Once terms like identity doubts and midlife crisis become current,” De Vries wrote, “the reported cases of them increase by leaps and bounds.”

And: “Rapid-fire means of communication have brought psychic dilapidation within the reach of the most provincial backwaters, so that large metropolitan centers and educated circles need no longer consider it their exclusive property, nor preen themselves on their special malaises.”  Click here to read the rest of the story.

Summary: Red Sox player  Curt Schilling and wife Shonda have written a book, The Best Kind of Different, about their son’s diagnosis with Asperger’s Syndrome as well as their domestic roller coaster of having four children and one dad with ADHD. Click here to read the rest of the story [story is no longer available].

The Teen Brain: It’s Just Not Grown Up Yet

Summary: Scientists used to think that human brain development was complete by age 10. Now we know better. For starters, the frontal lobes are not yet connected with the rest of their brains. And, while not mentioned in the story, this is especially true for teens with ADHD.

When adolescence hit Frances Jensen’s sons, she often found herself wondering, like all parents of teenagers, “What were you thinking?”

“It’s a resounding mantra of parents and teachers,” says Jensen, who’s a pediatric neurologist at Children’s Hospital in Boston. Like when son number one, Andrew, turned 16, dyed his hair black with red stripes and went off to school wearing studded leather and platform shoes. And his grades went south.

“I watched my child morph into another being, and yet I knew deep down inside it was the same Andrew,” Jensen says. Suddenly her own children seemed like an alien species.

Jensen is a Harvard expert on epilepsy, not adolescent brain development. As she coped with her boys’ sour moods and their exasperating assumption that somebody else will pick up their dirty clothes, she decided to investigate what neuroscientists are discovering about teenagers’ brains that makes them behave that way. Click here to read the rest of the story and hear the radio segment.

Summary: Given all the Henny Penny stories of Adderall abuse in college campuses, what’s really happening on one college campus?  A survey of Vassar students shows the vast majority are not using the medication illegally.  And, ten percent of students with ADHD seems like a reasonable number, in keeping with epidemiological data. Still, students who are taking non-prescription Adderall must know the associated health risks.

It’s no secret that Vassar students use Adderall. But how much, why and with what frequency remains more elusive. In recent years, Adderall has attracted media attention for its usage as a non-prescription stimulant in workplaces and on college campuses.

Several colleges and universities—among them Bates and Bowdoin Colleges and Brown University—have recently addressed the topic in their respective newspapers, and it seems every time midterms roll around at Vassar, murmurs of Adderall use are everywhere. [update: story no longer posted on the Vassar website]

Concocting a Cure for Kids With Issues

Summary: What’s the evidence for vision therapy as a treatment for ADHD?

In this article, journalist Judith Warner takes an in-depth look at why some parents, “dissatisfied with what they feel are the palliative half-measures offered by pediatricians, psychiatrists, psychologists, and learning specialists,” swear by vision therapy as a treatment for ADHD despite a lack of scientific evidence.

NOTE: I am a fan of Judith Warner’s recently closed “Domestic Disturbances” blog, especially her clear-headed and compassionate posts about ADHD. I’m happy to report that her new book, We’ve Got Issues: Parents and Children in the Age of Medication,  comes as a welcome read for parents of children with ADHD, Asperger’s, bipolar disorder, and more.

If you’re the parent of a child who’s having trouble learning or behaving in school, you quickly find yourself confronted with a series of difficult choices. You can do nothing — and watch your child flounder while teachers register their disapproval. Or you can get help, which generally means, first, an expensive and time-consuming evaluation, then more visits with more specialists, intensive tutoring, therapies, perhaps, or, as is often the case with attention issues, drugs.

For many parents — particularly the sorts of parents who are skeptical of mainstream medicine and of the intentions of what one mother once described to me as “the learning-disability industrial complex” — this experience is an exercise in frustration and alienation. Click here to read the rest of the story.

Summary: Here is a recent interview with Ms.Warner.

After almost four years, New York Times online columnist Judith Warner retired Domestic Disturbances, a blog inviting readers to weigh in on, among other things, the complexities and challenges of motherhood.

Whereas her last book, 2005’s hotly debated Perfect Madness: A Motherhood in the Age of Anxiety, focused on the structural and societal barriers in achieving the maternal ideal, her new book, We’ve Got Issues: Children and Parents in the Age of Medication, examines the numerous biological realities and pervasive myths surrounding childhood psychiatric disorders. Click here to read the interview.

American psychiatrists need to break away from a “culture of influence” created by their financial dealings with the drug industry, the head of the National Institute of Mental Health said in a leading medical journal.

Dr. Thomas Insel stops short of calling researchers corrupt or asking them to stop taking money from drug companies. But he highlights a “bias in prescribing practices” that favors brand names drugs over cheaper generics and non-drug treatments. And he says the situation must change with new standards for transparency and full disclosure of psychiatry’s collaborations with industry. “We can show the rest of medicine how to clean up our act,” Insel told The Associated Press.

His commentary appears in Wednesday’s Journal of the American Medical Association. His efforts got a boost Tuesday with the signing of the health care overhaul legislation which requires drugmakers and others to file annual reports to the government on their financial ties to doctors. The law requires reporting of gifts, entertainment, food, research money and other fees and grants. Consumer advocates applaud the “sunshine” provision because it also requires a database the public can search for their own doctors’ ties to industry. [the link no longer exists]