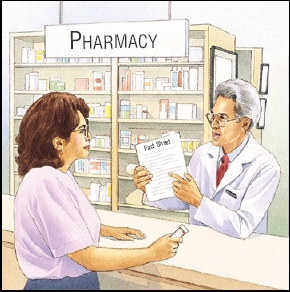 A pharmacist has written an informative comment to my last post on generic-same-as-brand Concerta. (Thank you, RL in Florida!)

I am re-posting it here to make sure more readers have a chance to read this helpful information. Your comments and questions welcome. – Gina

Hello Gina and Everyone:

I’m chiming in on behalf of the pharmacists, on the topic of generic versions of medications.

Just a little background on me. I live and work in Florida at a Walgreens pharmacy. I’ve been in the profession for 8 years now. We  have a large base of ADHD patients and we keep a large stock of every medication for a large population.

After reading all of the posts here, I am sorry that everyone has experienced the problems they have written about here. I’m providing a little bit more information that may help some people—even though some others may not accept it.

My first point is about the markings and the tablets found in the US.

Therefore, the medication that is being dispensed as the authorized generic Concerta is in fact the brand, because it looks exactly the same (assuming there aren’t any counterfeit medications going around) and has the same exact markings.

Now, to the point that there is less medication in these [authorized] generic Concerta capsules or that it is being changed for the generic. Every company has to follow strict quality-control procedures. Moreover, medications are a lot stricter than other types of manufacturing facility. The batches are all numbered, and they must give consistent results. Otherwise, we would get a notification of a recall due to whatever the problem was  found.

So, I do not believe that there are any problems with the [authorized] generic Concerta medications before they get to the Watson plant for packaging. [Note from Gina: in the early days of the new “true” generics for Concerta, there was much confusion. We were still trying to figure out what might be happening.]

The Meaning of “Bioequivalence”

That brings us to bioequivalance.

For a generic to be approved, it has to expose the body to 80-125% of the same medication compared to the brand (not other generics), as Gina referred to previously.

This is calculated as the AUC (area under the curve). This means that as the body breaks it down, you can measure blood levels of it every hour until it reaches clinically insignificant levels. Add up all those levels  for the brand and then multiply it by 80% and 125% to give you the range of what you need to see.

The medication can give exactly the same curve, higher at times and shorter length of effect. Or it might give longer effect and lower curves or whatever combination that gets it within that range.

For most medications, this isn’t significant, such as with Ciprofloxacin, whose dosages are 250mg and 500mg. But with medications such as Synthroid, which have very small increments, this can create a very significant response.

Now, that’s not a reason to avoid generic medications. That just means that you usually have to go up to the next higher dosage or sometimes two times higher to get the same result.

I do not claim to know all the laws in all other states, but Florida has something called a negative formulary. With this formulary, medications whose generics do not show similar pharmacokinetecs are deemed to be NOT SUBSTITUTABLE based on the AB rating found in the orange book.

Synthroid was on this list in the past but has been removed. Some items on our list are conjugated estrogens and extended-release theophyline. There are 6 drugs on Florida’s list now for us, and other states also have these negative formularies, which  might explain why one person who commented on this blog said their pharmacy required the prescription be written in certain way.

Yes, if it is available to you, mail order is an effective way to get any of these medications at a cheaper price.

All mail-order facilities must comply with the laws of their state and the states to which they are distributing. The Controlled Substance Act (CSA) does not state an expiration date on any Schedule II medication or C-II medication. Nor does it place limitations on the quantity for which the prescription can be written.

Some states, however, do put limitations on these; for example, in Florida, all C-II prescriptions expire one year after they are written. But all other prescriptions do that too, with the exception of C-III to V, which expire 6 months from the date that they’re written.

So, in theory, your doctor could write you one script for a year’s supply of the medication, but I doubt that anyone would fill it or an insurance company would pay for it. Good general practice guidelines would be that if it’s older than 3 months ago, contacting the doctor to see if it’s still appropriate and the current dosage should be done.

Before You Buy, Check!

Another thing that ADHD Roller Coaster readers have commented about is the possibility of returning an unwanted prescription.

I attended a conference hosted by the DEA, and this topic was discussed. It is actually Illegal, according to the Drug Enforcement Administration (DEA) for a pharmacy to accept any controlled substance back from patients for any reason.

Therefore, I always suggest before paying for your medications, ask to examine it, ask what it is, and what it is for, and if brand or generic was dispensed, etc. That way, you don’t buy something that you don’t want and get stuck for a month without the preferred medication.

Another commenter asked about getting Methlyn ER one month and then being given Metadate CD the next month. These are two very different formulations which should not have been interchanged unless the prescription states it.

Methlyn ER is a tablet and Metadate CD is a capsule. This is not an acceptable interchange as they are different dosage forms and have some different pharmacokinetics and would have definitely seen a difference in effect.

For that person, I’d suggest visiting that pharmacy and ask for a copy of the prescription. If it says a dosage form on it (like ER), I’d bring it up to the pharmacy manager and ask for a refund for a mistake that was made.

Our store policy is to make amends for such mistakes. We have an internal review process that protects us legally from errors. Everyone can make a mistake. But as long as you learn from it, it shouldn’t happen again. Normally, we just refund your co-payment so there would have been no cost to you. Even if there wasn’t a cost out-of-pocket, the pharmacy needs to know about the error so it doesn’t happen again.

For the latest on the ongoing saga around Concerta generics, read:  Authorized Generic Concerta Update.

14 thoughts on “A Pharmacist Explains Generics and More”