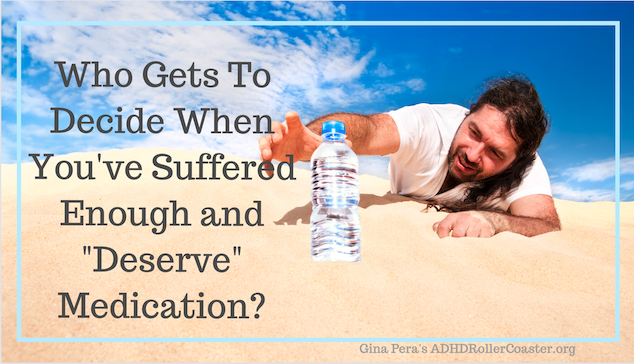 Myth #9: ADHD medication should be reserved only for severe cases.

Who made that rule? Who knows. Sounds Puritanical. Or, in the case of hucksters exploiting the “ADHD Market,” marketing.

You might have heard ADHD called a spectrum condition. That is, it exhibits in varying degrees of severity.  Therefore, on the face of it, Myth #9 is partly true: Some people with milder ADHD find little need for medication. Instead, they opt to implement targeted strategies. Even people with more severe ADHD symptoms deserve to know all their options.

That’s not the point if this myth-busting post. The point is: Who exactly gets to decide when you’ve suffered enough to meet their criteria for deserving medication?

A Question of Deserving?

The public often dismisses anything but the most severely impairing cases of ADHD as not deserving medication. As if one must first prove worthiness—by failing in life. Amazingly, even among some people affected by ADHD and benefiting from medication, there exists a certain self-centered myopia.

For example, you’ll  see variations on this sentiment expressed in the comments to any online article about ADHD:

Well, I know ADHD is real, because my child has it and has benefited greatly from medication.

But it simply cannot be that all these other children have ADHD and need medication. It’s way over-diagnosed, for sure, and over-medicated.

In other words, ADHD is real for me or my child. But for you or yours? Unlikely. 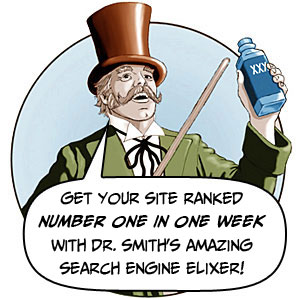 The public is further led astray by fringe physicians claiming ADHD expertise and making sensational claims about who deserves medication. The Anything-Goes Internet makes it oh-so-easy.

Upon closer examination, these physicians’ expertise typically lies more in self-promotion than clinical acumen. They give no indication that they are familiar with research or evidence-based practices. More concerning to me, however, is the reckless and even callous disregard they show their readers.

Instead, they use inflammatory rhetoric in order to exploit a science-ignorant public, vulnerable parents, and “in denial” adults with ADHD.

Consider this, from Dale Archer, MD (in “The High Price of a Quick, Quick Fix”):

“… I have come to understand that medication should only be a last resort, and even in those cases, people don’t need to be on these pills forever. But it has long been held that medication is oh so much easier in our pop-a-pill, immediate gratification culture.”

You read that right: A last resort.

In other words, until you or your child are worn down to a nub, medication is off-limits.

You also read that right: Pop-a-pill.

As if finding a stimulant medication that works best for that individual is ever an easy fix.  Then there are the commonly co-existing conditions to consider. They complicate treatment and often require a fine-tuned balancing act with a second or third medication.

Archer is promoting his book,  The ADHD Advantage.

Yet, an online ADHD-themed magazine (heavily supported by one pharmaceutical company) promotes a webinar touting Archer as an “ADHD expert”. On what basis? Is there a business association? If so, is it disclosed?

It’s no wonder, then.  The public continues to harshly judge people who take ADHD medication—or who give medication to their children. They have been authorized to do so by MDs.  No matter if the MD was board-certified in psychiatry eons ago and has no discernible expertise in ADHD. No matter if the MD is power-tripping — or in vigorous denial of his own potential ADHD challenges.

It must be said: Being an MD who allegedly has ADHD does not automatically confer ADHD expertise. That flies in the face of basic logic.

The Risks Are Great

They might even prey on a human proclivity toward begrudging others who gain a perceived advantage they do not enjoy.

Borrowing a metaphor from my blog series ADHD, Eyeglasses, and Stigma: We might compare it to how some of us need eyeglasses to keep from walking into walls, but others need eyeglasses only to see finer details. As in reading.

Here in this 21st Century, reading is important. Don’t you find it equally important to see finer details, such as the word stop on that big red sign or a contract’s “fine print”  before you sign it? 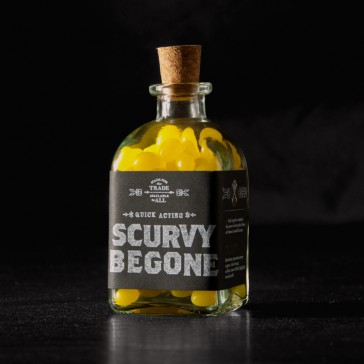 Don’t Count On “Society” Being Logical

By the way, never assume that because millions of people suffer from a condition, society will acknowledge the need for treatment—even if it is readily available.

Medical evidence can take 20 years or more to trickle down to the clinical standard of care—that is, what you’ll find in the average physician’s office. That goes for everything from hypertension to ADHD.

It also took years for our society to accept the widespread occurrence of depression and anxiety, conditions commonly linked to serotonin, among other brain chemicals.

Now, society is slowly accepting that, in a similar fashion, ADHD is linked to brain chemicals such as dopamine and norepinephrine.

We have a choice to make: embracing modern scientific discovery or languishing in old superstitions and promoting misinformation that limits human potential.

I welcome your comments.
—Gina Pera

49 thoughts on “Myth #9: Medication Only for Severe ADHD”