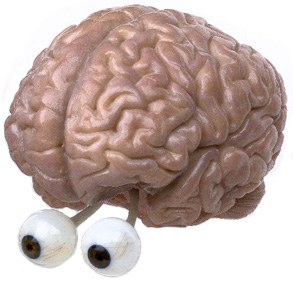 Vision: A Function of The Brain

As Well As The Eye

Consider this fact: Vision is only partly a function of the eye.

Yes, the eye receives sensory input in the form of light hitting the retina.  But those light patterns are then converted into electrical signals, which travel along brain pathways to a visual processing center. That’s where your brain tells you what you’ve seen and makes sense of it. Or doesn’t.

Here is a brief video explaining how vision works.

For some people, no set of eyeglasses will help to correctly process all that they are seeing. For example, some individuals with ADHD might see the words on the page perfectly, but they do not remember their meaning or how to place them in context. They might see a car traveling in the oncoming lane, but they fail to accurately process its speed and whether they have time to turn left in front of it. They might know their spouse is unhappy, but they don’t fully take in the facial expression.

ADHD Eyeglasses for the Brain

The medications that work to mitigate ADHD symptoms, by way of helpful metaphor, are sometimes called “Eyeglasses for the Brain.” The idea is this: Just as eyeglasses do not change our personality, neither do the medications used to treat ADHD.

Other sensory challenges can arise with ADHD, too. The brain signals relating to hearing, touch, taste, and smell—even the respiratory and cardiovascular systems—can also become “lost in translation” on the journey to the brain centers that process them.

If you have trouble grasping this concept, you’re not alone. Many physicians don’t understand it, either. Which might account for why they fail to see untreated ADHD at the foundation of so many conditions presenting in their treatment offices: obesity, restless legs syndrome, sleep apnea, diabetes, hearing disorders, and so forth.

In Part 4: “Seeing” ADHD—Or Being Blind to It