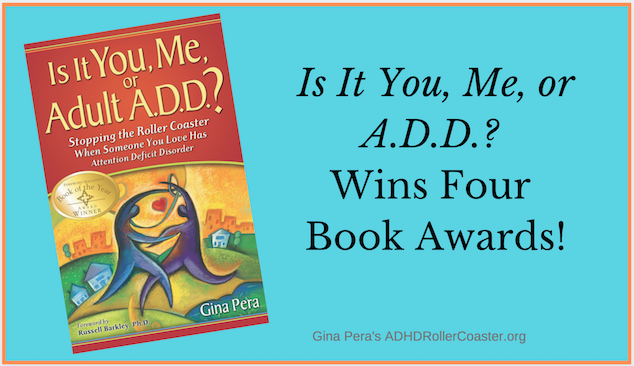 There I was, enjoying being with the engaging audience at CADDAC’s ADHD conference in Toronto. Meanwhile, my book was whooping it up in New York City—winning four national awards!  The announcement read this way:

Is It You, Me, or Adult A.D.D.?, by Gina Pera [that’s me], was twice-named a winner in both the Independent Book Publishers Association’s (IBPA) Benjamin Franklin Awards and ForeWord Magazine‘s Book of the Year Awards.

The awards came from two organizations:

What’s most exciting to me about these honors? The tremendous potential for the book to spread Adult ADHD awareness into new arenas. For that, I’m so grateful to both IBPA and Foreword magazine as well as the judges. They kept an open mind about a topic surrounded by more myth than fact.

Keep in mind: In 2008, when the book came out, there were about 3 books of any type on Adult ADHD. There were two blogs on adult ADHD: this blog and Jeff’s ADD Mind (no longer posted). Yes, Adult ADHD was on very few radars.

I could be biased, but I think this book is beautiful, too—cover to cover. I’m pleased to report that the design firm that helped me to package the contents so professionally and beautifully, TLC Graphics, snapped up their own awards at IBPA. Congratulations Tamara, Erin, and Monica! How lucky was I to find you! You made everything so much easier!

My Conference Lecture At The Time

As I mentioned, I was presenting at the CADDAC conference in Toronto when the awards were announced. What an honor, to share a stage with Russell Barkley, Ph.D.  CADDAC kindly shared with me the videotape. In turn, I share it on my YouTube channel, breaking it down into sections.  In the first video, I even share the news of the awards.

More About the Book Competitions:

From the two organizations:

—”The Benjamin Franklin Awards are sponsored by the Independent Book Publisher’s Association (IBPA) and celebrate excellence in editorial and design for titles published in the year 2008. Judges come from all areas of the industry: major newspapers and trade media reviewers, bookstore and library buyers and reviewers, non-competing publishers, artists and writers who serve the industry.”

—”ForeWord Magazine‘s Book of the Year Awards were established to bring increased attention to librarians and booksellers of the literary and graphic achievements of independent publishers and their authors. ForeWord is the only review trade journal devoted exclusively to books from independent houses.

“Our unique awards process brings readers, librarians, and booksellers together to select their top categories as well as choose the winning titles. Their decisions are based on editorial excellence, professional production, originality of the narrative, author credentials relative to the book, and the value the book adds to its genre.

And this is my favorite part:
“If your books expand a reader’s world, introduce a voice society needs to hear, offer practical knowledge where none existed before, or simply entertain so compellingly that all distractions fall away, they should be submitted for the Book of the Year Award.”

As usual, thanks to the hundreds of kind souls who’ve supported me in creating this guide.  We did it!