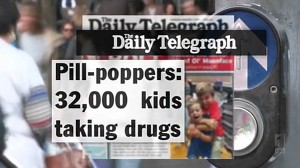 Now that the Australian show Kids on Speed? has aired, how was it?  Despite the sensationalistic, stigmatizing name and promotional material, did it offer anything useful? When I asked Shanti Roy, a photographer in Australia with late-diagnosis ADHD, for her opinion, she delivered this thoughtful report, along with some screen captures of local media’s coverage of the show. Thank you, Shanti.

My name is Shanti, 28, diagnosed ADHD – Primarily Inattentive, and I have been asked to write a guest post about my perspective of ADHD awareness in Australia and my reactions to the ABC1 show Kids on Speed?

First, my personal experience with ADHD in Australia. I was diagnosed surprisingly quickly, given that I have the lesser-known version of the disorder. No one really saw the symptoms in me, though, because I was withdrawn, quiet, and polite—and left to fail on my own. I doubt I would have been taken seriously if I had gone to my psychiatrist with my concerns about having classic ADHD. The assessment was done by the same psychiatrist who had previously diagnosed me with Asperger’s syndrome so he knew quite a lot about me already. After a short drug trial he was sure I had ADHD. I kept seeing him and would keep him up to date about my progress on the medication.

“But You’re Not Hyperactive At All”

When I told friends and family I have ADHD, there was a lot of doubt; it was the usual “but you’re not hyperactive at all’” rhetoric.  I’ve worked hard in my self-advocacy of ADHD to bring to light the different issues the non-hyperactive kind goes through. So, when I heard about the three-part documentary Kids On Speed?  to be aired on ABC1, naturally my interest was piqued. Overall, the documentary serves to open up rational debate about the medication issue in children with ADHD. 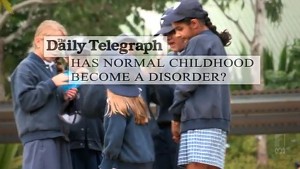 At title credits the sound of a child’s laughter is heard over blurred images of traffic in a dark environment; it fills one with a sort of creepy gloominess. Then, the viewer hears shouting of other arguing children, screams, and so forth. Finally, we see a montage of images of the children we will soon meet: scenes of them fighting, being overly active and being incredibly verbally and physically resistant to parents and other siblings. As a British–Australian women’s deep voice introduces us to the documentary, the viewer can hardly tell where it is all going. Is it for or against medication? Is it saying we should stop giving stimulant medication to children? How seriously does it take ADHD as a real disorder?

One of the experts in the program, Prof. Mark Dadds, explains the overdiagnosis of ADHD, itself a very real disorder. We can relax now. At least they aren’t denying its existence.

According to the show’s producer, Marc Radomsky, Kids On Speed? is neither for or against kids being medicated with stimulant medication for ADHD but it wants to provide a full picture of the story so we can begin to look at the issue seriously and come to a solution. In his statement he also talks about the need for actual special services for ADHD much like there is for autism. As someone with autism I can agree that merely having this label gets my foot in the door for a number of services, but I hardly get any support for my ADHD.

Those three words burn into already

present wounds in a sense of self-worth,

scarred over the many years.”

The original title, Kids on Speed, has since turned into a question but this move — a “salvo” into the controversy, as the promotional material states — has not wielded its desired effect on all people, including adults with ADHD who have been continually told by people who have never met them that they are making excuses for being lazy, for not having enough mental strength, for keeping a poor diet, and for taking “legal speed.” To those people with ADHD, the question mark isn’t enough; those three words burn into already present wounds in their sense of self-worth, scarred over the many years.

I felt just the same way when I saw the advertisement for Kids On Speed? the night before it aired. I flew into a racing, ranting rage. I hit the ADHD online forums, immediately unable to hold back my anger or even control what words ended up in the post.

“The majority of Australians already unapologetically spout their denial of [ADHD]”

My fellow ADHD chums were more open-minded—except for the other Australian citizens. It was all clear to us why we erupted: The majority of Australians already unapologetically spout their denial of our disorder and a documentary like this would just make them feel more right and smug. They wouldn’t hold back on the discussion board… “kids just need a good a belting”… “parents should actually be parenting”… “it’s the videogames”… “it’s their diet”… “Big Pharma just wants to turn your kids into brain dead zombies to better control them.”

Even though I knew watching a documentary like this would tear open old wounds I was trying to heal through the act of avoidance, I still decided to watch it.  The documentary includes both sides of the debate. The more negative is mostly provided through newspaper clippings about kids being overmedicated, and the more factual information is provided by psychologists who explain the neurochemical imbalance in the brains of people with ADHD. Yet, this isn’t explained in much detail and early in the show they tell us there’s no cause or biological reason and even one of the doctors testing these children, Prof. Michael Kohn, says, “It’s a diagnosis given when no other explanation for the symptoms can be found.”

That’s not the way I’ve seen it for all five years I’ve been diagnosed. It seems like it’s a diagnosis that follows very strict criteria with an age of onset as well, i.e symptoms must exist before six years of age.  There seem to be a lot of inconsistencies throughout the program.

For example, many of these children are said to have Oppositional Defiance Disorder (ODD), but according to that any child who has a meltdown or yells at a parent when the child is under stress has ODD. The doctors even say that it’s the ODD that is causing ADHD-like behaviours in some of the children. But that can’t be right. Prof. Russell Barkley, the foremost expert on ADHD, is clear in his definition of ODD: In order to have ODD, one must have ADHD. As I understand it, when a child with ADHD is continually told ‘no’ by a parent they become confused about what is right and wrong and just rebel about everything. It is a disorder of always being in the opposite frame of mind and from this comes pathological arguing and anti-social behaviour.

I seem to have more ODD than those children and I’m on the mild end; I like to argue.  Now these children were all under 12 years old so maybe it takes time for the true symptoms of ODD to manifest but all I saw in the documentary was children frustrated with hyperactivity, poor impulse control, and a poor attention span—and the educational and social issues that came with it—lashing out at parents or siblings. As for the parents, they were at a loss at what to do about their children’s behaviour.

Part of the doctors’ aim was to retrain parents on how to discipline these kids. This actually isn’t a bad idea because these children have different brains and react differently than non-ADHD non-ODD children, whom we call “neurotypical.”

This tells me that in order for the

what ADHD is it will take many more

As for what I think this documentary would do for ADHD awareness in this country: not a whole lot. It’s a step in the right direction, but to be honest I would expect to see something like this made in 1996 in America or the UK. The main focus was on hyperactivity and challenging behaviour. Now while it’s good that ADHD is finally shown to the public in a more factual and less sensationalized way, it’s just in one very narrow area. These doctors didn’t give the slightest hint they knew what Primarily Inattentive was about or the combined hyper-but-not-quite-as-destructive type.

This tells me that in order for the Australian public to fully grasp what ADHD is it will take many more years of self-advocacy. So far, the focus is on children, too. There’s a father in the documentary who had ADHD as a child but said he was able to control his thoughts and behaviour; that information is questionable in itself. So what are we weak adults with ADHD doing wrong?  So far, what we’ve learned from this show is that true ADHD is about hyperactivity and oppositional behaviour, and it only seems to affect children.

“Does ADHD always have to be that severe to be diagnosed and medicated?”

I might sound like I’m being unfair to these doctors and the filmmakers; they are doing a good thing by bringing awareness to a misunderstood and quickly diagnosed condition by the majority of doctors. And it’s great that the parents and their children are getting the help they need.  But it makes one wonder: Does ADHD always have to be that severe to be diagnosed and medicated?

Most ADHD adults don’t remain hyperactive but it becomes an internal struggle and the everyday responsibilities become a monumental task. Some of us adults diagnosed later in life have struggled in school, with social skills and our own self-esteem, and have developed anxiety, PTSD, depression, and personality disorders, not to mention a history of being fired from jobs or quitting jobs out of boredom and the never-ending relationship issues. Surely, picking up on that person’s ADHD issues in childhood can halve those problems from occurring later in life.

I’ll continue to watch the remaining episodes of Kids On Speed? and voicing my thoughts. But I really think the public’s reaction can go either way right now: either strengthening denial and complaints of overmedicating or opening people’s eyes up to the possibility that these children have issues that are too hard to control because it’s the different way in which their brains work, not that their parents are lazy in their discipline, as previously thought.

Shanti Roy has written more on this topic here. She is a live band photographer in Sydney; here is her Facebook page.

9 thoughts on “A Young Australian Responds to “Kids on Speed?””