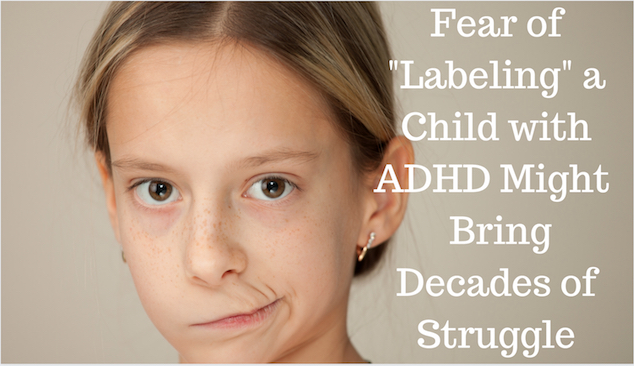 Misdiagnosing Adult ADHD as anything but ADHD is all too common when a clinician fails to understand ADHD. The risk is going by what a behavior “looks like”. As should be no surprise, living with unrecognized ADHD for a few decades can result in enormous fallout that “looks like” depression and anxiety disorders.

In childhood, this often happens because a parent seeks to spare a child the ADHD “label”. Yet, they unwittingly set up the child for lifelong struggle as Adult ADHD continues to be misdiagnosed as something else.  I’ve heard many variations on this story.  In this post, I share one guest essay on this topic.

Keep in mind:  It is often far easier to accurately diagnose ADHD in childhood, especially because it is one of the most common psychiatric diagnoses in children.

By adulthood, all bets are off. Long unrecognized ADHD and its fallout can be mistaken for whatever is the specialty of the clinician in front of you. That leads to misdiagnosing adult ADHD as depression, anxiety, Substance Abuse Disorder, bipolar disorder, all manner of personality disorders, and even low intelligence.

First, Some Background on Misdiagnosing ADHD

Being diagnosed with ADHD later in life typically brings mixed emotions. You’re glad to finally have an explanation. At the same time, you might regret the years of frustration, not knowing exactly what you were up against. You might think about what could have been.

Late diagnosis becomes all the more heartbreaking when you’ve tried to seek professional help—often multiples times—only to be misdiagnosed and, moreover, treated with medications that only made things worse. (See Misdiagnosed with Depression until Age 39: Best Week of My Life!)

Perhaps the most heartbreaking stories I hear come from adults whose parents refused to have them evaluated or treated for ADHD in childhood. Resentment can ensnare the relationship. What about when a parent still refuses to acknowledge ADHD, perhaps including their own? That can be especially upsetting and alienating.

These stories motivate me to offer the “voice of experience” to parents who are afraid of “labeling” their children with ADHD.

These parents’ fears are understandable. It is not always easy to find competent mental healthcare. Teachers and relatives might make misguided judgments. But with education and self-advocacy, parents have more control. (See One Man’s Story of Late-Diagnosis ADHD Touches This Mom)

In response, a reader named Heather shared her story in the comments. Heather agreed to my reprinting it for ADHD Roller Coaster readers. I hope it helps parents think through the decision.

I struggled with ADHD as a small child, most memorably when I was in third grade.  I was taking a state test. By the second page, I became bored and uninterested. So, I decided to pencil in a flower instead of taking the test.  As a result, my test results showed that I was borderline retarded.

The school placed me for a while in a classroom with mentally challenged kids.  The teacher must have noticed that I was clearly not borderline retarded. She and my mom fought to place me back in regular classrooms, where I still struggled.

I could not sit down long enough to concentrate so I was pretty much a class clown. It became obvious: Teachers were fed up with me.  I struggled throughout my school years,  making bad grades all along the way. But back then my mom could sign something to pass me to the next grade.

I Felt Stupid; Teachers Were Fed Up

I began to feel stupid because I could not sit down long enough to do the work. After receiving so many F’s, I began to not care anymore.  I continued to disrupt my classmates while they were working because I was bored.  In sixth grade, I was even suspended due to me talking all the time.

Still, my mother refused to test me for ADHD. I did not, however, know that at the time.

In seventh grade, I finally was tested but only for qualifying for smaller classes. This helped me some; at least  I was now able to complete the work.  Still, I barely made it to graduation. The only way I graduated high school was because I was in Learning Disabled classes.

At that point, my mother informed me that she felt I had ADHD.  She said that, all through my school years, my teachers would bug her about having me tested. For some reason, she had refused.

When I pursued an evaluation, I received the diagnosis. Furthermore, I was told my attention span was 2 minutes.

I took a stimulant for a short time but then was switched to a medication called Cylert.  My therapist said Cylert was a drug more for adults with ADHD. [Note: Cylert was always a fringe treatment for ADHD, though some people did well on it. It was finally removed by the FDA for concerns about liver damage: ADHD Drug Cylert Discontinued]

I tried Cylert and stayed on it for about three years.  But it was not helping me as the stimulant did. I asked the doctor to change me back to my stimulant. He refused. As I continued to struggle while taking this medication, I decided to stop it and just struggle without the added burden of side effects.  Despite trying natural remedies, changed in diet, and exercising more, I still struggled.

What was the nature of my challenges?   To name a few issues:

Dropped Out of College: More Misdiagnoses

Finally, I dropped out of college and started work full-time at a bar.  Working was the only thing that seemed I was good at.  I worked at night because I could never sleep at night anyway.  l liked to be moving around all the time.  Still, I struggled with my ADHD symptoms.

Finally, I asked my family physician for help. But the only thing he knew to do was prescribe antidepressants.  I would go on a long journey with a variety of antidepressants. They did not help me at all.  In fact, some of them even made me act a little crazy. [Note: Antidepressants are not considered first or even second-line medications for ADHD. In fact, they can actually intensify ADHD symptoms.]

Next, the family physician referred me to a mental health clinic that treated people with mental illness and ADHD.  I told the nurse practitioner there of my previous ADHD diagnosis.  She stated that ADHD in adults is watered down bipolar.  She diagnosed me with depression and bipolar disorder.  Again, I was prescribed antidepressants. They only camouflaged my ADHD for a while before they came back full force.

A few years before this,  I’d gone back to a college that had an accelerated program for working adults.  I graduated and began to work as a case manager.

My supervisor, who is a licensed therapist, came to me about getting tested for adult ADD.  I explained how  I’d gone to a clinic that specialized in treating people with ADHD but the nurse practitioner only gave me antidepressants.  My supervisor encouraged me to get re-tested so I could benefit from the right medication.

I got tested for ADHD and was diagnosed. Again.  Finally, I was prescribed a stimulant again. I talked to the therapist about my journey with  ADHD and how I always tried to use natural remedies or exercise.  They just did not help me.  She explained how my brain moves at a slower pace. Taking a stimulant made my brain move at a normal pace.

Before medication, I felt I could only use a small portion of my brain. Now I feel that I can use all of my brain.  Here are the things I can do now:

ADHD is a real illness and I have struggled with this illness half my life. I only wish my mother would have agreed to test me sooner so I could have been treated and not suffer for so long.

Thank you, Heather, for sharing your story of perseverance.

17 thoughts on “Years of Misdiagnosing Adult ADHD: One Woman’s Story”