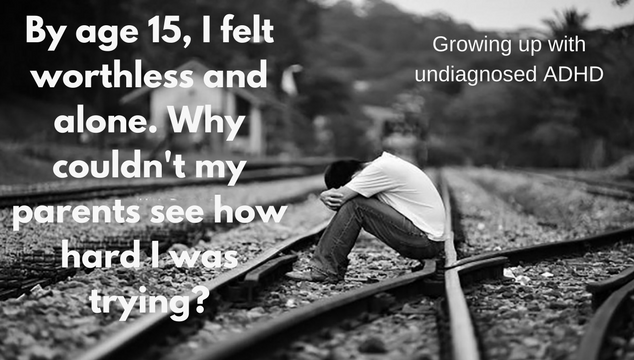 My Rugged Reality of ADHD

Do not read this if you are looking for a “Happy ADHD Story.” I do not have the gold medals of Michael Phelps or the arm of Terry Bradshaw. My life has been a struggle from the time I walked into first grade to my current age of 30. If you want something real and authentic to someone’s experience growing up with undiagnosed ADHD, however, I hope you will read on.

When I was in elementary school, my ADHD symptoms were as classic as the Rolling Stones were to Rock ‘n Roll. However, I did very well. Teachers always said I was bright.

I did well in middle school too, even making the president’s list one marking period.

As I moved from middle school to high school, a couple things changed. My grades went from A’s and B’s to C’s and D’s. My relationships changed too. I grew apart from old friends and was not able to make new ones. I viewed myself as a loner, a recluse. My confidence was slipping, and I had begun to experience the awful taste of depression.

The pressure from my school’s academic standards became unbearable. I did not do well under that pressure, coupled with the negativity I always received at home. My parents expected high academic performance from me. After bringing home a poor interim report one semester, I was threatened to be sent to technical school, which frightened me. Going to trade school, growing up where I lived, was a sign of absolute failure. 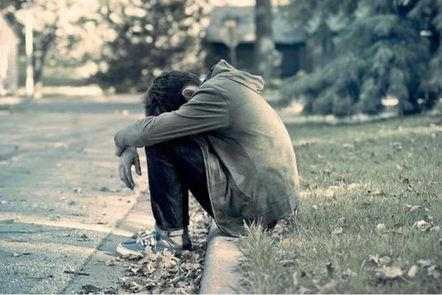 I do not understand why my parents did not see me trying. After trying to complete my assignments, I’d finally get bored and find something else more stimulating like a video game. My best attempts at reading still meant I fell asleep.

Other issues began to seep into my academic life. I did not know how to manage my time. I could not sustain attention or plan out future activities. Projects in the future became a terrible task. I could not figure out ways to accomplish them. These abilities are crucial when you are grappling with learning about DNA or Julius Caesar.

I felt worthless and alone at the age of 15. I would cry a lot because I was not good enough. My mom was verbally abusive and would even punch me with a closed fist. Just after turning 16,  I moved out of her home into my dad’s apartment.  This brought positive change to my life.

It did now, however, improve my grades. 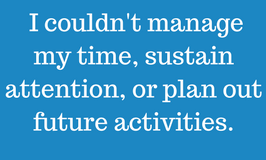 No One Saw That I Was Trying

Regarding my grade, my dad treated me the same way my mom and stepdad did. C’s were not good enough, even if I tried my best. I always had this sense that I was not trying hard enough. My dad failed to see that I was trying. Working on chemistry, I’d  get that sense of tiredness in my eyes and stop.

I felt shame and also felt like I was a disappointment. I also had that feeling of being alone, a lifelong theme.

The years of negative attention and constantly being told what I did not do right took its toll on me. I felt like I could not be myself, and the world had made its statement:  You got all A’s but you still got a C in math.

I limped into community college.

The same themes present in high school continued in college. I took a semester or two off and had multiple classes where I received “F”s. I felt really down on myself for not completing my education as the people I grew up with did.

I did not complete my Associate’s Degree until five years after I started. I was married by this time. 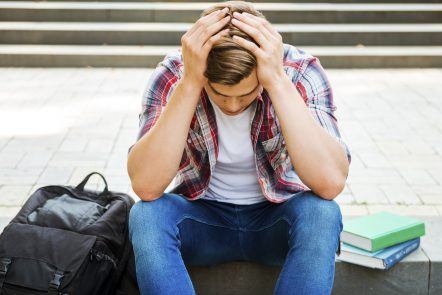 Struggles Grew Worse But Not Ready to “Seek Treatment”

My mental health struggles continued, and depression made my life very challenging. Depression affected my relationship with my new wife and at work. I was not ready to seek treatment.

My work struggles began within the first couple months of marriage. I was let go at my job probably because I was not catching on quickly enough. I had one job where I was yelled at for not being able to find tools or because I did not understand something quickly.

The boss, who yelled a lot, was always ready to jump down my throat. I was not trying to be a poor employee. All along I felt awful about myself and the feeling that I was in my own world of trouble, a desert without a human in sight.

During this time, I began to experience anxiety. 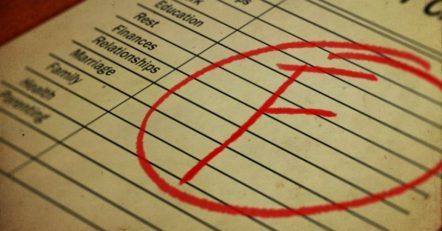 About three years later, my wife and I had decided to break up. What came next was life-changing.

In the summer of 2006, I began seeking treatment for anxiety through my family doctor. I also went to see a therapist, who revealed the bigger challenge of my life.

After answering a questionnaire in our second session, she said, “You have ADHD and you’ve had it your whole life.” I felt relief like a traveling and parched nomad, finally finding a well in a barren desert.

I cannot help but wonder how I slipped through the cracks laid by people who were supposed to be looking out for me. Recently, I have been pondering why they were not able to reach me when I was a kid, even without the ADHD diagnosis. I was bombarded by negative messages on my report cards about my school work. They have never left me.

I am a living example of the damage this disorder can do to someone’s life.  I am an example of how doing your very best with what you have been given is still not good enough.  I am constantly compensating for insecurities, which are probably due to my poor relationship with my mom and also never measuring up to what was expected of me. 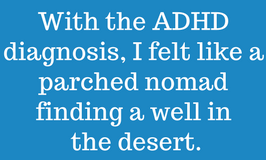 I have some positive things in my life, which bring me hope. I dream of being married again but know how challenging it will be to find someone who is safe and understanding.

I am a volunteer with Big Brothers Big Sisters.  My “little” has some medical problems, and I picked him for this reason.  It has been a joy for me to spend time with him and give him things I did not receive as a boy.  Big Brothers and Big Sisters has taught me boundaries to use when I interact with him.

My heart crumbled when my “little” told my supervisor he loved me.

The major joy in my life is my participation in an online community dedicated to people with ADHD.  I am among great people and finally feel like I am not alone. I finally have what I have always deserved regardless of what or how I did something.

This is love, support, and acceptance.

Dylan and I welcome your comments. Just scroll down the page; no registration or annoying codes to enter.

95 thoughts on “One Man’s Story: Growing Up Undiagnosed ADHD”