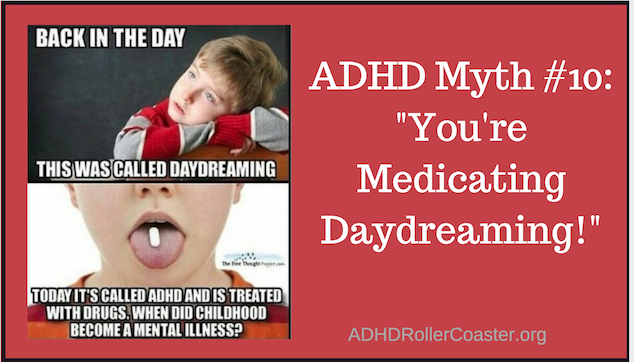 Now we come to ADHD Myth #10: The symptoms of inattention in ADHD are nothing more than “daydreaming.” This is one more aspect of an over-arching popular myth about ADHD: It “pathologizes normal human behavior.”

A website called The Farmacy posted this misleading and stigmatizing “meme” (above) on Facebook. An Egyptian woman with ADHD, Madiha, responded with the comment below. We had a friendly back-channel exchange. Then she kindly granted me permission to share it.

(Funny enough, the particularly annoying meme above also inspired my friend Jaclyn at The ADHD Homestead to write an excellent post: Bad ADHD Memes and my Real Reason for Taking Stimulants.)

I love hearing from newly minted ADHD advocates, especially late-diagnosis adults. They bring fresh vigor to the online “discourse.” And they don’t back down. They know how high the stakes.  I do, too.

The Difference Between ADHD and Daydreaming

Average daydreaming doesn’t cause you to grapple with remembering thoughts, tasks, names, and dates every single day.

Average daydreaming does not cause lost friendships and lost jobs. It does not cause failure in school, subject after subject. ADHD, however, can do those things. ADHD means you can become so enveloped in your daily racing thoughts—jumping from one uncompleted task to the next—that only weeks later do you realize you never returned that call—or remembered that friend’s wedding.

Average daydreaming doesn’t keep you up restless almost every night.

It doesn’t cause so much anxiety and depression.

It doesn’t ruin schoolwork, prevent you from applying the knowledge you know or cause you to be the last person to leave an (uncompleted) exam.

It doesn’t make you feel like you are a victim of your mind, constantly carrying you away from the best intentions and plans to a tornado of obsessive hyper-focused distractions that never end and result only in lost time. Constantly failing at perseverance and commitments of any kind.

There is more science behind ADHD than you may know.  Its existence has been traced back to at least the 18th century (“Newsflash: ADHD Dates Back to 1798—At Least!). It is no less legitimate a neurobiological and psychological disorder than Bipolar Disorder or Schizophrenia or Autism.

Yes, I disagree with giving stimulant medication to young children without exhausting alternative treatments first. But millions of children and adults suffering from ADHD have experienced dramatically changed lives thanks to these medications.

(Gina adds: Even very young children with ADHD might benefit greatly, in terms of health and safety, from medications. The New York Times made a hash of a misunderstood CDC report in Georgia. Soon all the news outlets were following suit. Read more at The Truth of 10,000 Toddlers Medicated for ADHD.)

Of course, it saddens me that people would give medications to children simply to curb normal childhood behavior. But it also saddens me when people write off ADHD as simply daydreaming.

Would you say to someone with clinical depression, “You are just sad”? Would you tell them, “You don’t need medication—just cheer up”?

ADHD might be over-diagnosed in some cases. But for millions of people, ADHD remains under-diagnosed, especially girls and adults.

I Used to Be Anti-Medication

People once resisted any psychological diagnoses. They preferred labeling people with mental illnesses simply as crazy and weird. This black-and-white thinking helps no one.

Here is the irony: I used to be anti-medication, just like this post suggests. Medication literally saved my life more than once when everything else failed.

I hope others will take this condition called ADHD as seriously as those affected do. I urge them: don’t be quick to write off other people’s experiences simply because they cannot relate.

You can read others in the ADHD Roller Coaster Myth-Busting Series here: