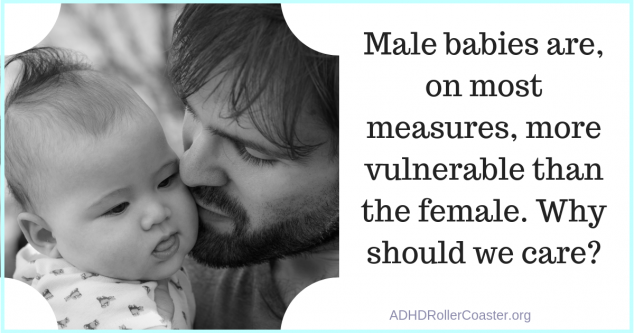 We’re hearing a lot these days about toxic masculinity and male entitlement and even male fragility. We hear almost nothing, however, about the many ways in which males—from fetal status onward—are, in general, neurobiologically more vulnerable than females. Yes, when I use the term male fragility, I am referring to brains, not egos. Yet, sometimes the two are inextricably connected.

In all age groups, for example, males die earlier than females. What are the many factors that contribute to that? I will detail examples below.

These fetal and birth disparities have nothing to do with culture. They have to do with physiology. Most likely, brain-based. As these boys mature and encounter other disparities, how much is physiological and how much is cultural? Clearly, the two are intertwined. How much does the physiological determine the culture? A lot, I would guess.

Let’s assume we want a healthier, happier future for everyone. How would we begin?  Perhaps where life itself begins:  biology.

I dipped into this subject in the last post: Newsflash: Male, Female Brains Differ, in 100s of Ways.

Simultaneously, I’d like to encourage reassessing cultural tropes that cloud our perceptions and a healthier path forward. For example:

I challenged these themes years ago in an article called How Esquire Got ADHD Wrong. It was my response to a dangerously wrong-headed Esquire magazine article, The Drugging of the American Boy.

The Mixed Bag of “Male  Entitlement”

Those narratives are dangerous—and typically self-serving. That is, they often contain some kind of a sales pitch. (Beyond the obvious clickbait potential for the site posting them, I mean.)

For example, The Esquire piece showcased an ersatz guru who sells his lucrative “nurturing boys” program to schools. The gist is, “Only  praise these boys who have alleged ADHD and never criticize or correct them.” Sounds like a recipe for narcissism to me.  (One “name” in ADHD world says the same.) Oh, by the way, that guru says that he “would have been diagnosed with ADHD as a boy”.

Other narratives proliferate, too. Some assert the “scientific fact” that sex is a social construct: The brains of females and males differ hardly at all. (Not true.) Others insist that “Male Entitlement” alone is creating all the problems.

Sure, males do still control much in the world.  American men with advanced degrees still out-earn women with the same degrees.

But “male entitlement” seems a mixed-bag at best:  Males of all ages have higher death rates (from suicide, homicide, accident, and poor health) and greater rates of incarceration, addictions, unemployment, physical fights and domestic violence (as perpetrator), obesity, and of owning a weapon.

If we want to reverse diminished life outcomes for males—including those with ADHD and other developmental disabilities—perhaps we should get serious about the science and the statistics.

This video ran across my Facebook feed today. Without knowing how these Russian children were selected for these marching lessons, we can’t accurately account for the disparity between the boys and girls when it comes to coordination and rhythmic sense. But we do clearly see differences in motor coordination skills.

The truth is, disparities between girls and boys start much earlier. In the womb, in fact. And these differences are physical.

I listed a few statistics in my previous post:  Newsflash: Male, Female Brains Differ, in 100s of Ways.  For example, consider the  birth statistics that point to greater male mortality. For every 100 girl babies that…

This chart clearly shows the advantage female babies have when it comes to life itself: 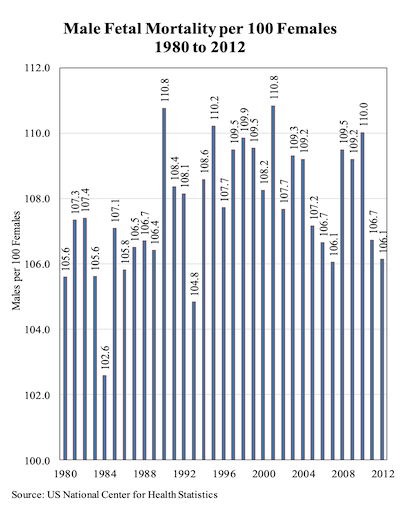 For Every 100 Girls With Disabilities—Age 3-5

Consider another category, gender differences among children aged 3-5 with disabilities:

For Every 100 Girls With Disabilities—Age <15

For dozens more examples, you can download the full report here: For Every 100 Girls, compiled by Pell Institute Senior Scholar Tom Mortenson and published in 2008 by The Pell Institute for the Study of Opportunity in Higher Education.

These fetal and birth disparities have nothing to do with culture. They have to do with physiology. With the nervous system at the core. As these boys mature and encounter other disparities, how much is physiological and how much is cultural? Clearly, the two are intertwined.

One clear (if perhaps controversial) voice is that of United-Kingdom-based adolescent psychiatrist Sebastian Kraemer.  Consider this 2004 BBC newspiece entitled Molly-Coddled Men  “More Successful”, in which Kramer is quoted:

“If parents know that boys are a bit behind in their development and generally weaker in every way except muscle then they will do a better job than they are doing now,” he said.

“If you want a real man, treat your baby boy as weak not as strong, then he will become strong.”

Dr. Kraemer said, by looking at research, the critical period appeared to be in the first month of life when the brain is still developing.

This is when parents should pay extra care, he said.

“It means looking after your baby like a fragile creature, not a little lump of muscle.”

The article is short, worth the read, and perhaps points one way to begin mitigating the lifespan of challenges for many men—and therefore elevating the rest of society as well.

The human male is, on most measures, more vulnerable than the female.

Part of the explanation is the biological fragility of the male fetus, which is little understood and not widely known. A typical attitude to boys is that they are, or must be made, more resilient than girls. This adds “social insult to biological injury.”

The data presented here have implications for the upbringing of boys.

The more developmental problems there are, the more sensitive care is required. Yet difficult babies often receive less good care, precisely because they are more difficult to look after.

Biological and social constraints work together against the interests of the male. If parents were more aware of male sensitivity, they might change the way they treat their sons.

Doctors, too, need to be aware that male patients may withhold their health concerns for fear of appearing needy or may ignore them altogether. 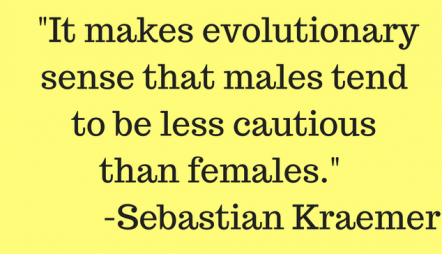 Kraemer followed up a few years later (2009-2019) with Notes on the Fragile Male, a short, very readable piece.  Excerpts:

Mortality rates: Males are more likely to die or be damaged by stress than females at every age from conception to old age, from very low birthweight babies (22% vs 15% die) to schoolchildren to old men.

Y chromosome: One factor is that while males have only one, females have two X chromosomes – with one in reserve – so that a mutation on one can be counteracted by its absence on the other.

Social class difference: From toddler to school leaving age, boys in the bottom social class are more than twice as likely to die from any cause as those at the top. There is a social gradient for girls but it is not so marked.

Male risk-taking:  Biologically, a species does not need many males if one individual can produce offspring from many females. In many (but not all) mammalian species, only a minority of males produce offspring. The rest are redundant, so it’s worth taking big risks if you want to get a mate. It makes evolutionary sense that males tend to be less cautious than females.

“Gina, What Is Your Point Here?”

One reader commented on my previous post (Newsflash: Male, Female Brains Differ, in 100s of Ways):

I’ve read this article with great interest. Having concluded my reading, I am lost as to its conclusions or what you intended to do with it. I’d appreciate a clarification.

Excellent question! With two short blog posts, I’ve waded into a sea of cultural landmines. What was I thinking?

Haha! I figured someone would say that. 🙂

I tried, obviously not entirely successfully, to explain in the first paragraph:

Science and sociology: The two fields often find themselves at loggerheads. That is the case with ADHD.  Life scientists point to the evidence and social psychologists explain ADHD as a “social construct”).

And, it’s increasingly the case when it comes to accepting that there are differences between the male and female brain.

Perhaps you are not aware of the growing insistence from ideologues. They claim, as I write in the post, that the only difference between males and females comes from the culture, not biology. That any “bad behavior” from men is always volitional, a choice.

That is simply not the case. One factor: The male brain from birth to death is more vulnerable to dysfunction, illness, and injury…

If we don’t try to clearly understand these vulnerabilities, we draw the wrong conclusions and implement the wrong solutions.

What did I “intend to do with” this information?  I simply hoped to spark reflection and invite scrutiny of popular but dangerously anti-science and simplistic tropes.

*According to a 2008 U.S. CDC report: Health, United States, 2008, with Special Feature on the Health of Young Adults.

—I welcome your comments.