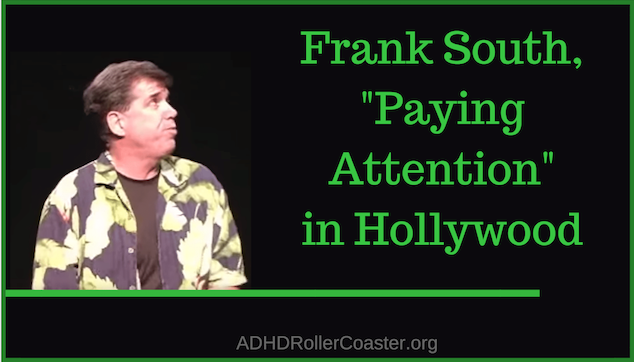 It doesn’t sound comedic: Getting pulled over by the traffic cop when you have ADHD.  But the best comedy involves a bit of pain, right?

Welcome to two excerpts from Frank South’s brilliantly candid one-man show, Pay Attention: ADHD in Hollywood, on the Rocks, with a Twist.   It overflows with hard-but-entertaining truths about some adults’ experience of ADHD.

What inspired Frank to create this show?  He explains in a touching “Ah-Ha” moment. You’ll find that video below, too.

South, formerly a hit-show TV writer and producer, is now a stay-at-home dad and freelance writer.  Learn more about his work at his website: Frank South

Excerpts from “Paying Attention In Hollywood”

The Ah-Ha Moment Behind the Show

In this video, Frank explains the inspiration for creating this show—and all the other ADHD-themed work to come.

At the end of a 20-year career writing TV, I was diagnosed with ADHD then got sober.

However, I didn’t want anybody to know about it. I was lost until my wife said “Stop hiding. You’re a writer… Write about it.”

You’ll find other posts sharing Frank’s wide-ranging talents, including Stories from an ADHD Dad: Frank South on Growing Up Undiagnosed

6 thoughts on “Frank, ADHD, And The Traffic Cop”