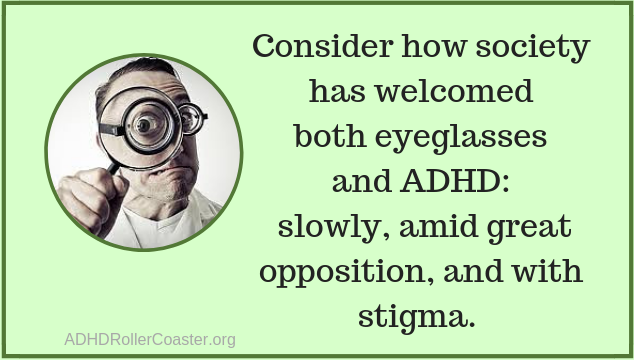 A man went to an optometrist to get his eyes tested and asked,

“Hey, will I be able to read after wearing glasses?”

“Oh! How nice it would be,” said the patient, “I have been illiterate for so long.”

I first heard this old saw as a child. It made no sense to me. Of course, someone with poor vision cannot read without wearing glasses.

Yes, I get the joke now, thank you.

Yet, it wasn’t that long ago that most people with poor vision could not learn to read. It wasn’t due to low intelligence. They simply lacked access to eyeglasses.

Even further back in time, few people had need of reading itself. That’s because reading material was scarce!.

We can compare this phenomenon to the modern-day diagnosis of ADHD. Humans have had ADHD throughout history; it’s only now that we have the knowledge to recognize it.

In large part, the printing press fueled the need for eyeglasses. Can we make a case that modern life’s complex demands has upped the ante on recognizing, and managing ADHD? I think so.

As it happens, many (not all!) people with ADHD also have trouble reading. More precisely, they make out words and sentences on the page just fine. But they struggle to comprehend what is written.

For many, their reading struggles lie beyond vision correction. It resolves with medication.

Might this account for so many late-diagnosis adults being told as schoolchildren that they had dyslexia?  Of course.

In all likelihood, most didn’t have dyslexia. Instead, they had ADHD-related impairments in reading. Several friends with late-diagnosis ADHD but childhood diagnoses dyslexia told me they started reading entire books once they began to take medication.

The common metaphor—that stimulant medication acts like “eyeglasses for the brain”—applies rather literally in this case. More generally, the phrase means to convey the idea that the medication doesn’t change the person; it only provides access to capacities the person already possesses.

The Parallels: Acceptance of Eyeglasses and ADHD

Have you ever considered the parallels in how society has treated the concept of both eyeglasses and ADHD, especially as regards stigma?  In both cases, knowledge that promised to vastly expand human potential gained acceptance only slowly and amid great opposition.

In other words, on the imaginary Internet of two or three hundred years ago, might we have found comments such as these?

Next Up on ADHD, Eyeglasses, and Stigma

Coming up in Part 2, a brief, illustrated history of “corrective lenses.”