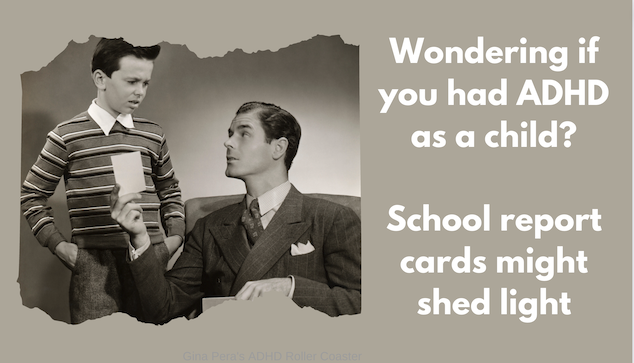 I’ve seen them: Yellowed school report cards that might as well be ADHD report cards — if teachers and parents had known how to “translate”. In this post, I’ll share the report cards from one man diagnosed later in life with ADHD.

Professional evaluations for Adult ADHD should ask about ADHD-related challenges as a child.  Sometimes a parent isn’t available—or isn’t an entirely accurate reporter. Still hanging on to your childhood school report cards? They might come in handy—or at least be illuminating.

Case in point: the childhood reports (below)  for San Diego-based psychotherapist and ADHD specialist Lew Mills, Psy D. He graciously agreed to share them here. Even when we met, in the 1990s, Lew was a veteran ADHD advocate and clinician.

To be clear: professional evaluations for Adult ADHD should not require school records. When I hear from readers whose physicians make them mandatory, I suspect these clinicians aren’t entirely expert in ADHD. Or it might just be a wearing-you-down obstacle to diagnosis. The goal? Limit the number of people receiving ADHD treatment through a national health system or managed care provider.

In some countries, an adult ADHD diagnosis depends first having a childhood diagnosis. Never mind that when these folks were children, pediatric ADHD wasn’t much on the radar. There’s a nice little Catch-22 there.

The official diagnostic criteria for Adult ADHD does include this condition:  Several inattentive or hyperactive-impulsive symptoms were present before age 12 years. The leading ADHD experts I have asked about this, however, explain that this is more suggested than required. We have to consider the larger picture, the other factors.

Even if your school days were stellar—full of friends, high grades, and positive reports—that doesn’t mean you didn’t have ADHD. Plenty of bright kids with undiagnosed ADHD can compensate, sometimes all the way through college. They might also benefit from a well-organized household and support. They hit the “ADHD Ceiling”  only when entering the “real world.”

From an early age, though, Lew’s teachers were detecting something amiss with their bright little charge.   See if you can detect the red flags. 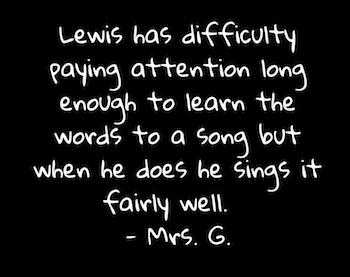 “His Lack of Self-Control”

Lewis has been doing satisfactory work usually, however, his lack of self-control often interferes with his learning during quiet or written work. He misses directions and frequently does not finish. He also disturbs and interrupts the other children. He needs to be spoken to about this.

Mrs. B. reports that Lewis would rather talk or sit crooked on his chair or watch his neighbors than write. At first, he couldn’t get a lesson finished because of this but he is doing better work now.

Mrs G. reports that Lewis has difficulty paying attention long enough to learn the words to a song but when he does he sings it fairly well. —Mrs. G. 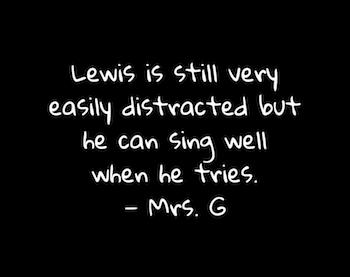 Lewis has accomplished a great deal this year…His achievement scores show he is well above public school grade level and in the upper half of all first graders in independent schools.

Lewis has a particularly fine understanding of number relationships; however, he is handicapped in his classroom work by his inability to work fast.

Lewis is generally the last student to hand in his work and he frequently has several papers on his desk waiting to be finished. He continues to be a wiggly worm but his attention span has increased a great deal. I have enjoyed being Louie’s first-grade teacher.

Mrs. G. reports that Lewis is still very easily distracted but he can sing well when he tries.

Mrs. C. reports that Lewis has improved in his individual skills and enjoyment for group play. 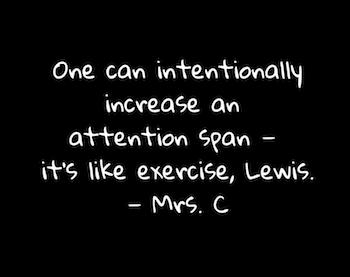 Lewis is really going through “ups and downs” right now.

He has a keen insight into many facets of the grammar, composition, and literature comprehension aspects of the English this year. He’d far rather relate these orally than in written form.

His subtle sense of humor gets him into all kinds of “jams” which a better sense of self-direction would have appeared on paper.

One can intentionally increase an attention span — it’s like exercise, Lewis. Work harder so the effective things you want to say will get the notice they deserve; the quality of your thought is diluted by the careless, ineffectual way you put it to paper. You have something to say; now say it effectively! 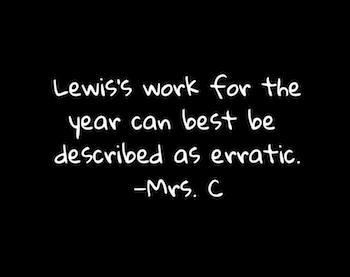 Lewis’s work for the year can best be described as erratic. He has turned in work ranging from poor to superior depending on the amount of time, effort and thought he gave it. …

His compositions have shown considerable sensitivity in content, but poor to impossible mechanics and appearance of papers.

If Lewis can bring up the level of neatness and accuracy in his written work, that is, care more, he can do excellent work in English 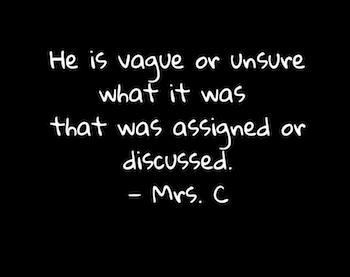 Lewis has shown flashes of thorough preparation and sustained effort so far this term. He is better about promptness and completeness of papers. However, we need to help him organize his time, materials and self-direction. His inattentiveness for a large portion of the class time is a handicap to him when he wants to get to the job — he is vague or unsure what it was that was assigned or discussed. Seldom has he brought the appropriate materials to class; often he is removed from what is relevant in class. When he’s alert and accurate, he does very good work. Much too often he is erratic and distracted. 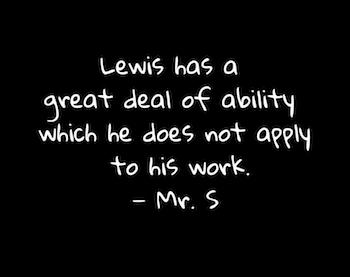 “A Great Deal of Ability, Sloppy”

Progress and Achievement: little, if any

Lewis has a great deal of ability which he does not apply to his work. His written assignments are sloppy, barely perfunctory attempts to complete the assignment. He can contribute in class and occasionally will do so but it doesn’t happen often. His behavior tends to be disruptive. I hope the material we will be covering next will catch his interest because his ability is obvious. 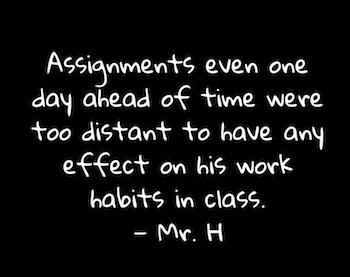 “Mastery Good When He  Works”

Lewis seemed to make progress only when I was able to keep track of his studying every five minutes. Assignments even one day ahead of time were too distant to have any effect on his work habits in class. When he learns to study without someone to look over his shoulder, which is impossible even in a class often, he’ll do just fine in French; his mastery of the skills is very good when he works. ????

Lew was diagnosed well into adulthood, and devoted considerable energies as a volunteer and treating professional to create more awareness about the reality of ADHD.  Here he is with his school-age son.

40 thoughts on “What Can Old School Report Cards Reveal About ADHD?”