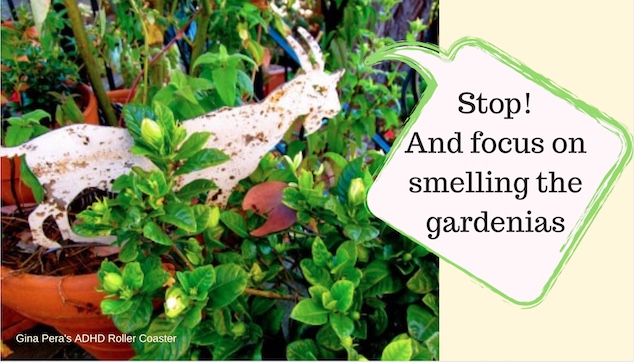 Can ADHD affect sense of smell?  Maybe. But maybe not in the way that we might presume.  I first wondered about this observing the olfactory habits of my husband, aka “Dr. Goat.”

One day, our mail carrier handed me a small box. As he walked away, I said to myself, “Wow, his cologne still lingers. Must be strong stuff.” Then I opened the box: It contained a small bottle of patchouli oil. Even though securely closed, the scent was overpowering.

I bring the powerfully odiferous package to my husband. “Do you like this scent,” I ask, holding it under his nose.

“Nothing,” he responds.  What? 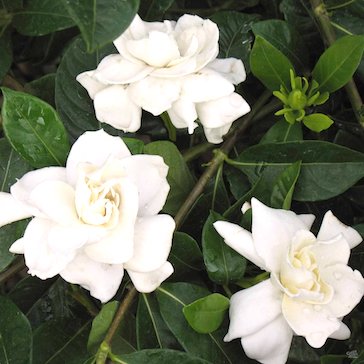 Sense of Smell: Another “ADHD Thing”?

This wasn’t the first time when my husband seemed unable to share my appreciation of luscious scents. Consider my gardenia plant covered with blossoms. (See photo above.)

I grew up in the South, with the scent of magnolia and gardenia blossoms hanging in the air during hot summer nights. Though I didn’t miss that hot mugginess, I did miss gardenias. So, I chose a variety appropriate for Northern California, Veitchii.

After a few years of struggling, it finally came to life when I found a semi-sunny spot it really likes.  Delighted that the buds hanging there since December had finally opened, I brought one in for my husband.

“I must have blown out my olfactory receptors in the lab,” he concludes. He meant time spent studying to become a biologist, dealing with various chemicals during bench experiments.

But how can that be true? He absolutely detects some fragrances. Including some delicate ones. Plus, he is super quick to pick up any annoying aromas, including scented laundry detergent and fabric softener, chemical deodorizers or cleaners, cologne, and the like. We share an aversion to those. You’ll find none in our house.

“Congrats, You Are A Psychopath”?

It’s very strange, his erratic sense of smell. Perhaps it is contextual? Perhaps it’s related to his energy level, how close his stimulant medication is to wearing off, or his flat-out “interest” in detecting the odor?

For years, I left it at that.

I certainly did not share with him articles such as this: Do You Have a Poor Sense of Smell? Congrats, You Are A Psychopath.

That article reports on a study from Macquarie University in Sydney, Australia, in which scientists make their case linking psychopathic personality disorder to impaired “olfactory processing.” The paper is titled Olfactory Abilities and Psychopathy: Higher Psychopathy Scores Are Associated with Poorer Odor Discrimination and Identification.

Here is the abstract:

In this study, we examined whether poorer olfactory discrimination and identification—taken as an indicator of OFC integrity—was associated with the degree of presence of psychopathic traits in a community sample. Seventy-nine non-criminal participants completed the Self-Report Psychopathy scale and a standardized measure of olfactory ability, the Sniffin’ Sticks, measuring odor threshold, identification, and discrimination.

Consistent with predictions, we found a relationship between psychopathy and olfactory discrimination and identification but not odor threshold, even after controlling for gender, age, empathy, smoking status, and craniofacial surgery/injury.

These findings suggest that brain areas subserving higher olfactory processes—identification and discrimination—are somehow less efficient in individuals who score higher on psychopathic traits. In particular, we suggest that this relates to processing within the orbitofrontal cortex.

Still, one question nagged: Could a zinc deficiency explain his erratic sense of smell? Limited study has associated:

No, he seemed to lack other signs of a zinc deficiency. And, we eat a fairly zinc-rich diet (pumpkin and sunflower seeds, some red meat, etc.)  Still, I was intrigued by a do-it-yourself zinc test, so I purchased the liquid zinc assay. He agreed to an experiment.

It’s simple. You take in a teaspoon of the liquid.  If you’re zinc-deficient, allegedly you’ll taste very little. It might even taste like water. If you’re not zinc deficient, it will taste unpleasant. My husband grimaced immediately, which apparently means he’s not zinc deficient.  (Yes, I did a “blind” control – a spoon of plain water.)

I found one published review paper on this zinc test: The Accuracy of the Zinc Test Method.  There were some positive findings, but researchers caution that the test cannot be considered definitive. There is more information at diagnose-me: Test Zinc Levels: Overview

(PLEASE don’t supplement zinc without serious consideration. There can be “too much of a good thing.” To be clear: We don’t know if ADHD neurobiology itself might limit zinc absorption/uptake. One study presents preliminary evidence that ADHD neurobiology itself can affect iron uptake: Can Stimulants Normalize Iron Uptake in Individuals with ADHD? Maybe) 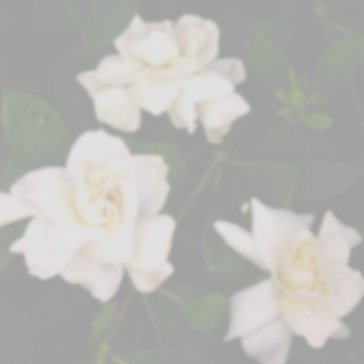 Then I Noticed: He’s Not Focusing!

A fresh gardenia bud blossomed. I plucked the velvety cream-white flower and carried it inside.  “Check it out,” I said, holding the gardenia near his nose.

But this time I more closely observed the manner in which he attempted to take in its scent: Sniff-sniff-sniff. That’s when I realized: He’s not focusing on smelling! He’s focusing on sniffing.

I tried his method. Sniff-sniff-sniff. Also nothing.  Try it yourself. If you just make sniffing actions, in rapid succession, you really can’t smell much.

I shared this stroke of insight with him and then said: “Okay, now close your eyes, take a deep bre…”

My husband always erupts into irrepressible chortles when I make that particular suggestion.  It reminds us of our ridiculously futile efforts, pre-ADHD diagnosis at various workshops, to help him to “calm down.”

Some day I will share with you the “Mindfulness Raisin Incident” of 1994.

I change tactics.  “Okay, just sit back relax and leisurely take in the scent.”  He did. 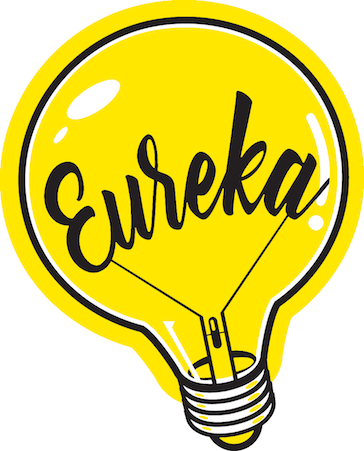 ADHD:  A Constant Source of Discovery

After almost 20 years of studying ADHD, I still learn something new every day:

I never fail to hit upon some small understanding that connects to a larger picture of comprehension.

Who knew that ADHD might affect a sense of smell—that we must “focus” on taking in a flower’s aroma? Even if a micro-focus, it’s still focus.

For me, it gives entirely new meaning to the phrase “Stop—and smell the roses, er, gardenias.”

Have you experienced this phenomenon?  I’d love to hear about it.
This post originally appeared on July 6, 2017.

22 thoughts on “Can ADHD Affect Your Sense of Smell?”