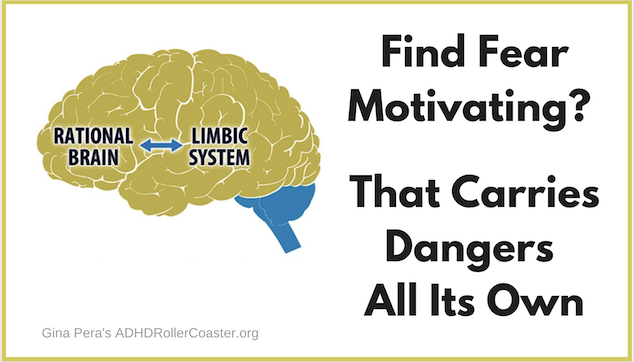 My husband, prior to ADHD diagnosis at age 37, called his best coping tool Fear-Based Management—fondly referred to as FBM™.  Yet he, along with many other adults with late-diagnosis ADHD, often learn this: The strategies that seemed to help them prior to diagnosis can be destructive in the long-term.

Let me explain, briefly. Then I’ll share with you an extremely insightful essay about the dangers of relying upon our brain’s “primitive” limbic system to lead us, to motivate us, through life.

In a very basic sense, we can think of ADHD as a see-saw. On one side sits the heavy limbic system; the other, the much lighter rational brain. Let’s call it the Prefrontal Cortex, or PFC.

The Limbic System is all powerful, primitive instincts—fear, pleasure, greed, anger, reward, lust. Without balancing influence from the PFC, the limbic system can carry things too far.

Living with someone who’s Limbic System dominates can be life-draining. The constant negatives. Constantly simmering anger and irritability. It’s hardly fun for that person, either, who can seldom relax and simply feel pleasure or happiness. And it’s certainly not conducive to safe driving, steady work performance, and effective parenting.

I hear from individuals with ADHD who say they have “great instincts.” I don’t doubt them.  But sometimes it seems they are confusing “great instincts” with being fearfully distrustful of everyone and everything. Sometimes on the slimmest of evidence. That, too, can be the Limbic System’s out-of-whack fear-protection response.

Obviously, over-reliance on our brain’s “fear center”—or limbic system—comes with risks.  The limbic system is more complicated than that, of course, but fear definitely lives there.

In fact, it seems entities that seek to manipulate us promulgate these fears.   I live in Silicon Valley. I see clearly that engineering to manipulate emotional responses can be highly profitable. 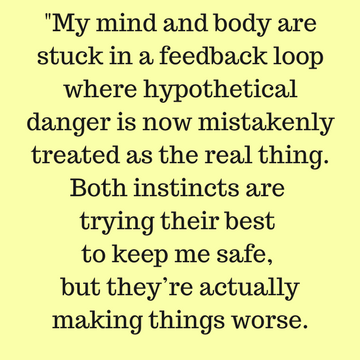 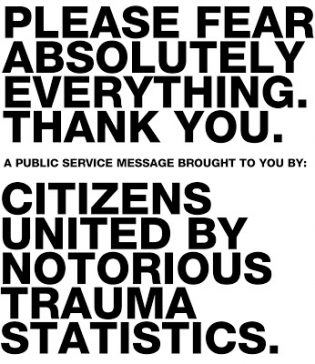 But look at the culture we live in. Like my hyperactive imagination, it throws potential dangers at us from every direction, nonstop. Then it spins them out into detailed narratives. Gruesome crimes are lovingly resurrected years after they were solved and turned into hour-long television shows. Missing white women dominate the news cycle for days. We’re hyper-sensitized to threats, via television, movies, news, advertisements, and office gossip. There’s no tiger-free region for us to move to, no way to escape from the danger. It’s a closed system, a feedback loop, and it’s very destructive.