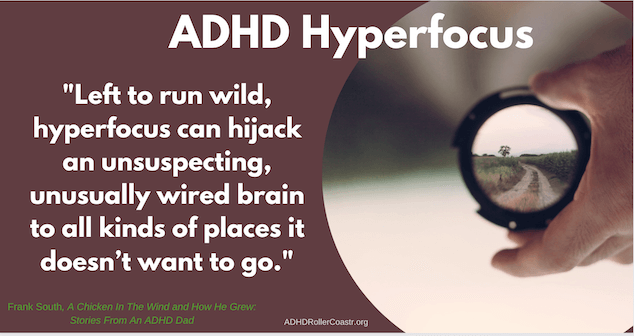 We’ve all heard about the much-ballyhooed ADHD Hyperfocus.  Hollywood screenwriter and now author Frank South shares his personal take on the topic below. It’s an an excerpt from his new book: A Chicken In The  Wind and How He Grew.

Frank’s talent is huge and multi-faceted. ADHD is fortunate to have his attention turned upon it! You’ll find more links to his work at the end of this post.

First, Can We Define Hyperfocus?

Here’s a question for you: Just how do the folks claiming the “gift of ADHD hyperfocus” know what regular old intense and prolonged focus feels like? By the same token, I do not have ADHD so how can I know how “ADHD Hyperfocus” feels? It’s a conundrum!

When I worked in the newsroom,  I often spent 6-8 hours at a stretch editing a particularly gnarly investigative piece. And that was just one part of a 12-hour day. But I do not have ADHD. In other words, I can do it when I have to. But I’d rather not, because it’s hard on my body, for one thing.

Perhaps there’s at least one difference between my newsroom kind of focus and ADHD hyperfocus. That is, I could withstand interruptions (the phone was always ringing) and get right back to where I was. I didn’t like it, but I could do it. Many of my friends who have ADHD, however, report that interruption being a huge challenge. 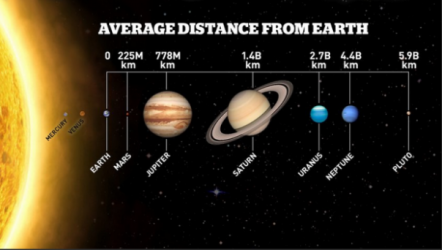 Clinically speaking, the term Hyperfocus describes an inability to direct one’s focus toward the task at hand, a tendency to get deeply distracted by the “shiny.” Instead of hyperfocus, it’s considered dysregulated focus.

For example, in the old days, my husband would vehemently and irritably react to my interrupting his work. (We both worked at home then.)  I did it rarely—and only with critical bit of news at the end of the day; e.g. “Hon, dinner’s ready. ”  I found his angry reaction nasty and hurtful. And selfish. “Make your own dang dinner,” I felt like saying. (And sometimes I did!)

Only after a few years into medication treatment was he able to explain it:

It had taken me a long time to get focused. It was like I had traveled from earth to Pluto.

When you interrupted me, I have to travel all the way back to earth, just to see what you want.

And who knows if I will get back to Pluto again!

These days, he has much smoother transitions from focus to interruption and back to focus.  He finally knows what that feels like. In the past, before treatment, he didn’t even know it was possible.  For him, at least. Therefore, to his mind, I was being incredibly rude! 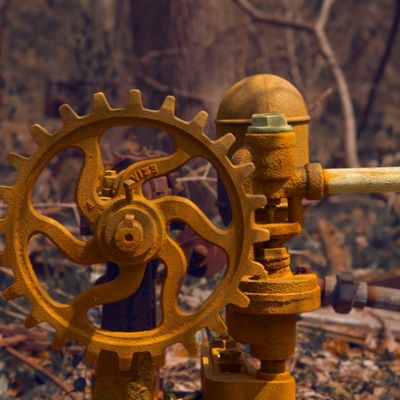 As I wrote in Is It You, Me, or Adult A.D.D.? , folks with ADHD can have trouble with transitions; it can feel like trying to pull a rusty lever.  Consider this passage on page 41, from Stephen Copps, MD:

We’ve been told that people with ADHD have only two speeds, full throttle and sound asleep. Do you know why that is? It’s because the accelerator gets stuck in the on or the off position. There is nothing in between.

Not only does the accelerator get stuck, but also the brakes are faulty, so the person with ADHD has a hard time stopping once they get started. The radio’s sensitivity knob is frozen, and so only the loudest signal gets through.

You could even say the driver’s “zoom lens” is rusty. When you drive, you need to constantly be zooming in and out from the big picture to the smaller detail and back again.

The driver with ADHD either sees 40 things at once or over-focuses on only one. 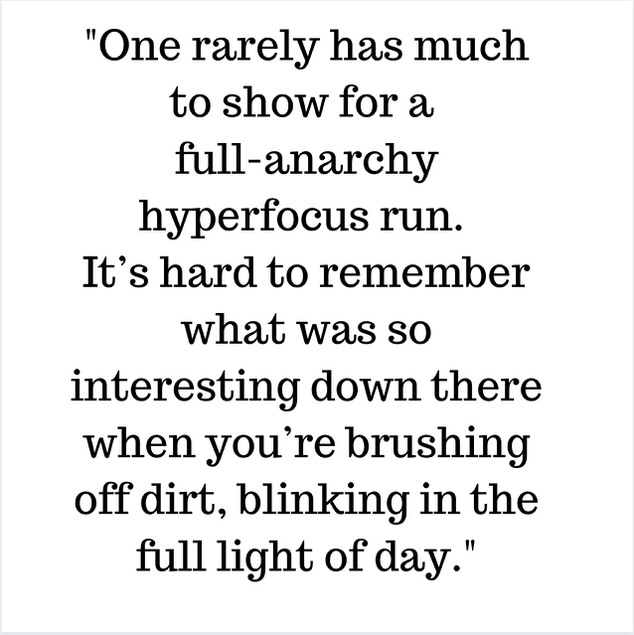 Writer Frank South has a few intriguing words to say about ADHD and Hyperfocus in his new book, A Chicken In The Wind And How He Grew.  You can read this short excerpt now, below—and read a longer excerpt soon!  (See Stories from an ADHD Dad)

You Can’t Count on It to Save You

There are a couple of cautions about hyperfocus I’ll talk about with Coco [Frank’s daughter] when I get home. The first, which is easy enough for her due to her nature, is that some psychologists and others doubt the existence of hyperfocus. Even my spell-check doesn’t think it exists. So it’s not something you want to brag about in middle school, where peer judgment is deadly enough as it is.

The difficult thing to accept is that you can’t depend on it. You can’t let procrastination run wild and count on hyperfocus to save you. Sometimes it just won’t show up.

And in my experience, it’s a tool that takes time to learn how to use and get some control over. If left to run wild without reins, hyperfocus can hijack an unsuspecting unusually wired brain to all kinds of places it doesn’t want to go.

You get pulled down one rabbit hole after another following one solid well-lit idea that leads to another idea that’s not solid or well-lit, but can be taken apart and interestingly, has light inside, which tumbles down another offshoot hole, where near the bottom there’s a whole family of faintly lit related ideas waiting to be taken apart and examined to see if any can shed new light on the original idea.

They won’t, but it doesn’t matter now.

Things Are Humming—Until I Lose Interest

My brain is humming, calm, and happy inhabiting some deep twisty place, prying open little, unrelated whys and what-nots. Until I lose interest.

When my interest snaps off, I look up startled. I don’t know what time it is, where I am, what I’m doing, or how to get out of there. Sometimes that triggers a panic attack, but usually just a medium-long confusion spell and embarrassment.

One rarely has much to show for a full-anarchy hyperfocus run. It’s hard to remember what was so interesting down there when you’re brushing off dirt, blinking in the full light of day.

It’s a lesson every Marvel comic book preaches: All superpowers have a price.

Read Frank’s book—A Chicken in the Wind and How He Grew: Stories From an ADHD Dad

13 thoughts on “ADHD Hyperfocus: All It’s Cracked Up To Be?”