Fathers can have a particularly tough time parenting children with ADHD. When the standard discipline strategies don’t work, they can get frustrated with themselves and their child. It doesn’t always end well. Over the years, a few books by a few experts have sought to fill this void. But one man is known for speaking directly to fathers, person to person.

Earlier this year, we lost a beloved leader in the ADHD community: Robert “Tommy” Dendy. Only a few months before, I had opportunity to speak at length with Tommy by phone, in preparing a Tribute “roast” to wife Chris Dendy at last fall’s CHADD conference. That night, I saw his face beaming with pleasure, pride, and bemusement as we praised and lovingly skewered his “other half”.  It is indeed hard to think of one without the other. Together and individually, Chris and Tommy have made huge and  unceasing contributions to ADHD literacy and advocacy.

In this post, I’d like to share with you three personal remembrances about Tommy; they  tell you much about the man but also the lessons he taught, including this: Believe in the goodness of your child and in your ability to cope with whatever challenges arise!

At the end of this post, you’ll find snippets from a DVD featuring him and three other fathers of children with ADHD, produced by Chris and available for purchase at her website (along with many other great resources you’ll find nowhere else): Father to Father: Expert Advice on ADHD. Trust me, watching this video can provide powerful support. It’s four dads sitting on the couch being real.

CHADD’s Attention magazine ran a beautiful tribute to Tommy, from three men who knew him and his work: Thomas Brown, PhD, Terry Dickson, MD, and Bryan Didier, a father who volunteers with CHADD Kansas City, along with wife Jeremy Wilkins Didier.  While many mothers of children with ADHD have reached out to help others walking the path, Tommy was one of the few advocates speaking directly to and for fathers.

Editor Susan Buningh gave me the honor of sharing it with ADHD Roller Coaster readers.

Tommy’s was the Hero’s Journey, transforming the lessons he learned the hard way into elevating countless lives.

We miss him dearly.  Please feel free to leave a remembrance in a comment.

A Tribute to Robert “Tommy” Dendy

Over the weekend of February 1, I enjoyed spending time with Chris Dendy and her husband, Tommy, as we participated together in the Southeast Regional Conference on ADHD in Alabama. We enjoyed many laughs and good times as we visited and dined together over that weekend. One week later, I was shocked and saddened to receive word from Chris that her beloved Tommy had suddenly died.

Tommy and Chris had something very special in their own relationship and in their family. They also gave something special to many other families who, like themselves, knew the worries and frustrations of raising kids with ADHD.

One of Tommy’s most important contributions was his willingness to share the story of the failures of his early efforts to understand and discipline his eldest son as he floundered in middle school and high school due to ADHD. Tommy was a graduate of the US Naval Academy and he served as a Lt. Commander in the US Navy. He had learned well the benefits of firm discipline.

In speeches to multiple audiences and in his DVD, Father to Father: Expert Advice on ADHD, Tommy spoke of how he came to recognize that the tough love discipline strategies he learned so well in the Navy did not work, and often were destructive, in his early efforts to raise his eldest son. He spoke honestly and directly about his pain and guilt when he found his high school-aged son lying on the floor bleeding from a self-inflicted gunshot wound. And he spoke about how he came to learn about how a child with ADHD can often look so much like “won’t do it” when it may actually be “can’t do it.” 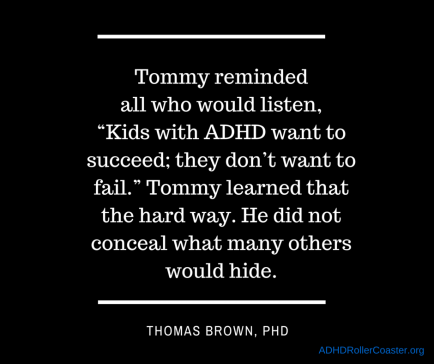 Tommy spoke with pride of how, when given adequate support for his ADHD, that son was able to be successful in school and eventually in developing his own career and his own family. Tommy reminded all who would listen, “Kids with ADHD want to succeed; they don’t want to fail.” Tommy learned that the hard way. He did not conceal what many others would hide. He gave the stories of his experience as a generous gift so that other parents could come more directly to providing the loving, patient, and consistent support he learned to provide his family. We owe Tommy a debt of gratitude for his powerful reminders of the need for empathy and compassion in raising children who struggle with ADHD.

Until We Meet Once More

I only had the pleasure of knowing Tommy Dendy for the last sixteen months of his remarkable 73 years. But influence cannot be measured in sidereal movements (he’d get a laugh from that reference to required Naval Academy plebe knowledge).

Even on the basis of a few interactions, he stands not only as one of the more influential men in my life, but the kind of man I want to become. As an advocate for fatherhood and shining example for dads of children with ADHD, Tommy Dendy’s life was one well lived.

I was not present for his primary talk at CHADD’s conference in November 2013—but my wife, Jeremy, was. I was at a renewable energy finance conference in DC and could attend only the last two days of CHADD’s conference. During Tommy’s talk, Jeremy sent me a flood of texts—the gist of which was: You HAVE to meet this man! I think her unstated message was: You HAVE to learn from this man! Our children and I NEED you to be more like this man! 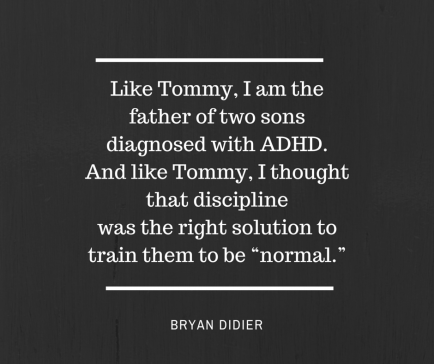 Flash back, then, to that Friday afternoon in November 2013. I found Tommy and sat down with him in the Hyatt lobby. We spent ninety minutes talking as men and fathers.

We immediately had a friendship—but I also had a new mentor and role model. So, over the rest of the conference, I politely “stalked” him and soaked up everything he had to teach. After the conference, Jeremy and I read more of Chris and Tommy’s books and materials and found much success in applying their lessons and experiences.

Of course, anyone who ever heard Tommy share his experience as a father of sons with ADHD knows the story is all at once powerful, intimate, honest, humble, and most importantly, hopeful!

As successful as he was in his first and second careers as a naval officer and business executive, I would say Tommy was most successful in his third career as an educator. Who knows how many lives he touched through his role as a speaker, author, and “Dad-vocate” for fathers of children with ADHD. But even if it was only one (me), he had an impact. He’s made the world a better place—he’s made me a better father and husband. He taught me to parent with more patience and compassion, and he taught me how to better understand and relate to my sons. He gave me the ultimate gift of hope.

Last fall, Jeremy and I had the ultimate pleasure of hosting the Dendys as keynote speakers for a conference in Kansas City. Again I used the opportunity to “stalk” Tommy and absorb more of his knowledge.

Jeremy and I also enjoyed the real treat of seeing Tommy and Chris as a couple. In Jeremy’s words, “The other thing I always appreciated about Tommy and Chris is that not only were they educators in the sense of teaching people how to be better parents and teachers of kids with ADHD, but they were a shining example of what a good marriage looks like. I will never forget how Tommy was the perfect foil to Chris. They completed each other’s sentences and were incredibly loving with each other. Tommy helped Chris organize all of her things, and he was without a doubt her rock throughout that weekend.”

As a final send-off and tribute, I offer the second verse of the Naval Academy fight song (original 1906 version):

We sail at break of day-ay-ay-ay.

Through our last night ashore,

Drink to the foam,

Until we meet once more.

On behalf of all the parents of children with ADHD whose lives you’ve touched, thank you, Tommy, for giving us the courage and coordinates to sail our voyage. 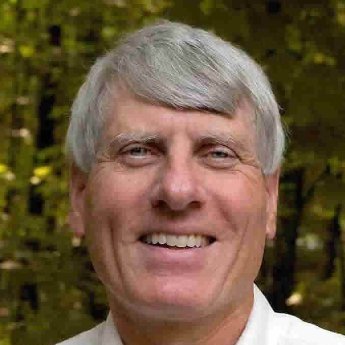 Throughout the last fifteen years, I have had the opportunity to hear Tommy Dendy speak on a number of occasions and have always come away more inspired than ever before. When he spoke at conferences, he truly engaged his audience because of his willingness to openly share his story and through his genuine passion to help other parents.

A graduate of the US Naval Academy, Tommy later worked for thirty years at Rock-Tenn Company, retiring as a senior vice president with responsibility for eleven plants. After his retirement, he became a passionate advocate for educating fathers about ADHD. Because he did not grow up with ADHD, his message expressed the fear and frustration he once held about his own children’s future, the mistakes he had made in disciplining them and the challenges of being a father to children with ADHD. And yet his message offered much hope and encouragement to parents to never give up on their child. And that is exactly what he did; his persistent love for his children and the desire to see the best for them is exemplified in the successful lives of his children today.

Tommy’s most powerful lesson is that you must love and accept your children just the way they are. He and his wife, Chris, raised three children with ADHD, and five of their grandchildren also have ADHD. The couple knew other relatives with ADHD who were successful in their careers, so they took an optimistic view of what a person with ADHD can achieve. Staunch supporters of CHADD for the last 25 years, the Dendys were charter members of CHADD’s President’s Council and have been members since 2003. During their terms on the CHADD board of directors, they also served as co-chairs of the finance committee. 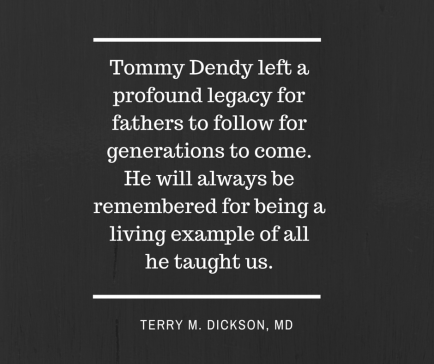 Tommy’s unique gift was the ability to explain the challenge of fathering children with ADHD in a way that “fathers could understand and accept.”

Fortunately, his wisdom was captured for future generations through his passionate presentation in Father to Father: Expert Advice on ADHD. On this DVD, four fathers talk about their experiences living day-to-day with children and teens with ADHD. They share the sources of conflict as well as the joys. Tommy insisted upon the addition of a section titled, “A Military Dad’s Perspective on Discipline.”

Whether sharing his message with one person or speaking to a large audience, Tommy Dendy left a profound legacy for fathers to follow for generations to come. He will always be remembered for being a living example of all he taught us.

Even if you didn’t know Tommy but appreciate his work, please share a comment in this public tribute.

It’s easy to do. No codes to deal with.

9 thoughts on “A Tribute to Tommy Dendy: Teacher of Fathers”