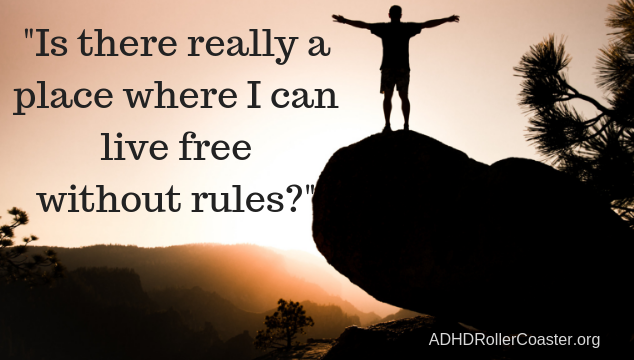 When we talk about ADHD and escapism, we often mean procrastinating and videogaming. But we also hear about the ultimate escape: escaping society’s rules.

The question then becomes this:  Is ADHD  a diagnosis only because society imposes impossibly conformist rules upon people with ADHD? Without these neurotypical martinets’ self-serving restraints, would folks with ADHD freely live in harmony with nature? In some idyllic village? In a place that has no rules?

Recently, a friend with late-diagnosis ADHD reflected upon this topic.  We’ll call him Governor Pappy. He originally posted this essay on his blog, the Flour Hour: Thoughts of an Occasional Thinker.

There’s a school of thought that sees ADHD as (more or less) a natural fit or neurological adaption for our ancestral hunter-gatherer ways.

I’d heard of it before, but it never really made waves in my mind. Without detailing here about why I’m disinclined to see ADHD as beneficial*, I want to share where my mind went the last time I read of this theory. Because, I don’t know, blind nuts sometimes find squirrels.

There’s something in me that fairly regularly wants to blow everything up and disappear to the wild.

I want to be that inspirational meme stock-photo guy looking on with a thousand-mile gaze from the top of some high mountain peak, maybe living in a mountain-top cabin. I’ve told “the Man” to kiss my wrinkly old donkey. No company phone rests easy as unexploded ordinance by my side. All ties to Society are cut.

Freedom – no more rules, expectations, social cues, being needed at 10 PM by some customer.

But I never do blow everything up. Probably never will. Not that my soul doesn’t crave and need solitude, natural beauty, and quiet to change pace with the sort of career I have. But there’s something a bit problematic–naive–about that urge as a guide to life, as if there really is a place where I can live free without rules and I’ve been going about life all wrong.

And that’s where ADHD comes in. I have to learn to differentiate between the very real need for humans to rest and recharge from stress, and that other urge – the one which believes one can cast off from responsibility and rules and find some vague idea of “being free”. 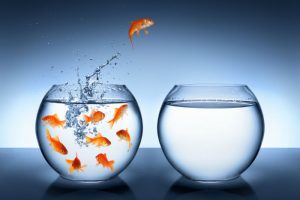 Can We Avoid Rules?

For the well-to-do folks on the planet, like many of us in America, we’ve traded one set of rules for another. For example, I probably don’t have to worry about freezing my ass off at night while I try to sleep, keeping one eye open for the bear, sticking near a supply of fresh water, or where my next meal is coming from. My points of stress have been redirected a bit to things like highway traffic patterns and health care costs.

But Nature is a harsh mistress they say—it damn sure has a set of rules.

The more I see it as recreation, the more privileged I show myself to be. Folks who truly live off the land, living and dying with the seasons, rain and drought – you think they get by without paying attention to the rules?

You think Mama Nature and Daddy Time don’t have deadlines (what the hell do you think we call em deadlines for anyway)?

You think attention lapses ain’t gonna be fatal while hunting—or haphazard planning won’t screw you out of your year’s crops and threaten your very survival? 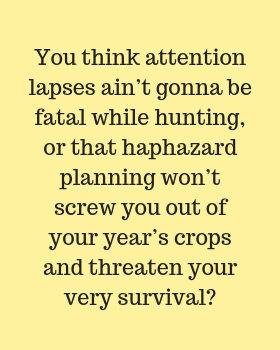 I mean, if we want to look at unsubstantiated but totally plausible theories about ADHD from an evolutionary standpoint, it might be worth considering this: We’re only seeing such high percentages of ADHD diagnoses over here because we’re privileged enough to have circumvented some of the, err, more strict evolutionary checks and balances on self-destructive behavior in a species.

I like to think I’d make it if I had to learn how to survive. The human race is pretty darn resilient, and I’m a pretty resourceful sumb*tch. But if I’m honest with myself in those afore-mentioned urges, I’m not talking about trading in one set of responsibilities for another, I’m talking about escapism. 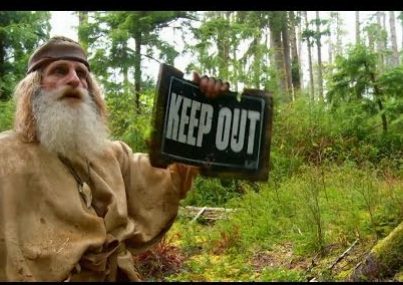 Can You Run from Rules, Honestly?

If it ain’t just simple naivety, it’s some kinda cultural appropriation—as if folks in poorer parts of the world live “simply” because it’s fun and they have a choice, and choose to live daily under threat of “natural” death.

Buried inside that thought process, I’m counting on the fact that I know I can “come home” somewhere. I can find gainful employment. Somewhere there’s a damn grocery store every half mile. I can shrug off freezing my ass off by hitting a few buttons on my thermostat. I can flip the bird to some crazy-ass mosquito-borne virus just by keeping my windows closed at night (individual results may vary).

So basically I’m saying I can’t run like this and still live honestly. Yep, I can still run off somewhere. But I’ll be doing just that: running, escaping, quitting. I’ll be leeching on someone or society in general somehow. Someone is picking up my slack while I figure out my shit. Someone’ll be paying for my escapism, and I don’t want to live with that.

But I can learn to stick with things I’m committed to through those urges to quit. And I  can see that often powerful impulse to run with a more cautious eye. I can figure out if there are things about my life that actively and unnecessarily suck me dry. Then I can make reasonable changes. I can find medication that works. If I need a real break, I’ll have earned it and paid for it. 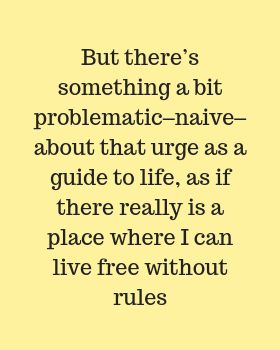 Lord knows there are aspects of our affluent society that just ain’t working for our good. But my periodic compulsion to simply escape it is largely irresponsible in a number of ways.

There may indeed be things about our ancestors’ existence beneficial for us to keep in mind today as we navigate technological advancement, population booms, PTSD, and other things. But there’s no good in sugar-coating what our past existence involved. It’s no good deflecting your inability to find success and fulfillment in the here and now as “society doesn’t accept me”.

It’s here. Find a better path through it by all means. But you can’t escape paying your dues by running to the past.
__________

* For that, you can read Depression and the “Gift” of ADHD

17 thoughts on “A Life Without Rules? ADHD and Escapism”