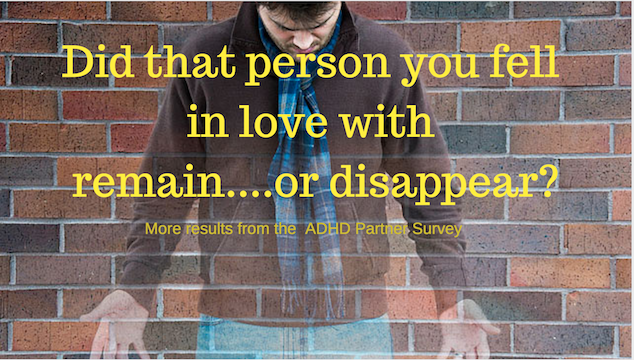 Perhaps that person you fell in love with, months or years ago,  is still right there by your side. But maybe that person, while still physically present, has somehow—inexplicably, strangely, terrifyingly—disappeared!

So much confusion clouds the relationship—for both partners—when ADHD is not recognized or understood from the get-go.

Oh sure, I know. Everyone‘s best behavior slacks off once the honeymoon ends. It’s human nature.

Then again, ADHD is human nature, too—to the extreme. Take everything that we humans do on a regular basis—procrastinate, act without thinking, misplace things, lose our tempers. Then multiply it by a factor of X, X being the number and severity of ADHD symptoms.

ADHD Partner Survey Says: Half and Half

In a previous post (What Traits Attracted You To Your ADHD Partner?), I compared the attractive personal traits that attracted ADHD Partner Survey respondents to their mates—and vice versa. This time, let’s see if those traits continued to be present (or attractive) as the relationship matured.

In a nutshell, almost half the respondents said, “Yes, those traits that initially attracted me to my ADHD partner stayed the same.” As for the other half….not so much. The rest weren’t sure or were still in the early days of dating. 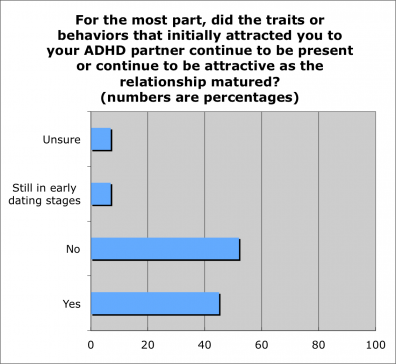 And, What Does This Mean?

It means that, for some couples affected by ADHD, that transition from Honeymoon to Letting Your Hair Down happens at warp speed. (I explain potential reasons why in Is It You, Me, or Adult A.D.D.?).

For still others, it means that some respondents mistook their ADHD partner’s inability to plan as “spontaneity.” For example:

It’s different for everyone. While there are some predictable patterns in ADHD-challenged relationships, there are no cookie-cutters.

To shed further light on these “half and half” responses, I’ll soon share individual write-in responses from the ADHD Partner Survey.

As always, I welcome your comments.
This post originally appeared July 6, 2016

16 thoughts on “ADHD Partner Survey: Where’s That Person You Fell in Love With?”