What does Adult ADHD look like? In fact, it can look different in each person who has it!

Yes, that’s right. The estimated 10 to 20 million of these adults in the U.S. alone have distinct personalities, talents, backgrounds, and even genetics. As with all other human individuals, they don’t fit neatly into a box.

Still, there’s one thing adults with ADHD do have in common. And that is: various experiences of a variable syndrome. At the most basic level, much depends on the severity or number of official symptoms.

That’s why if you rely on shaky stereotypes about Adult ADHD, you might never see the Big Picture.

Instead, you’ll see only caricatures. More importantly, you’ll miss the fact that someone you love might have it.

To gain a clearer snapshot of ADHD, let’s begin by considering its symptoms. I’ve adapted them in the chart below for my ADHD Partner Survey.

(Note: You don’t need all the symptoms to qualify for the diagnosis, just a certain number and to a degree that causes impairment in life.)

Learn more about the survey here:  About the ADHD Partner Survey

From this symptom list, ADHD Partner Survey respondents selected behaviors that their ADHD partners displayed more frequently or strongly than most people their age. (That’s because you don’t expect a 22-year-old to have the same maturity as a 50-year-old.)  I’m sorry if this image is blurry; WordPress compresses images, and this is a large chart. 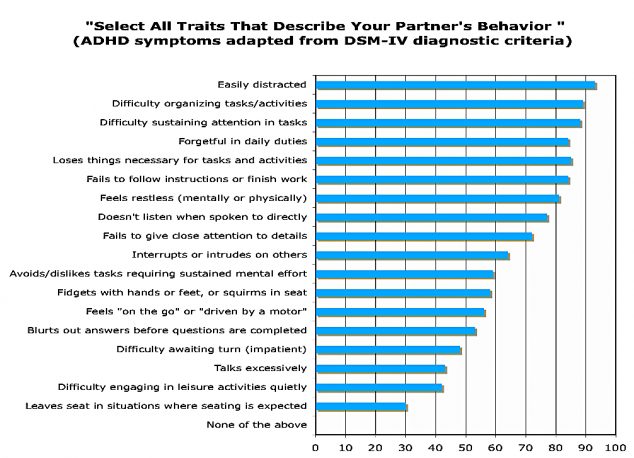 I’ve ranked the selections from the most commonly reported to the least. As you can see, these are the top vote-getters:

Do you not see in this chart your own or your ADHD loved one’s biggest hot spot? Perhaps it’s irritability, poor sleep habits, low self-esteem, or spending impulsively? Don’t worry. There’s plenty more to understanding how cut-and-dried symptoms come to life and take shape in real people.

How Did You Learn Your Partner Might Have ADHD?

—Gina Pera
An earlier version of this post appeared June 28, 2008

30 thoughts on “What Does Adult ADHD Look Like? It Depends On the Individual!”