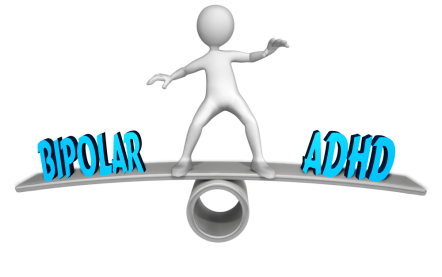 My friend and fellow journalist-advocate John McManamy writes an excellent blog on bipolar disorder: Knowledge Is Necessity. He started that blog in 2008, the same year I started this blog, ADHD Roller Coaster. We were “early adopters,” you might say. 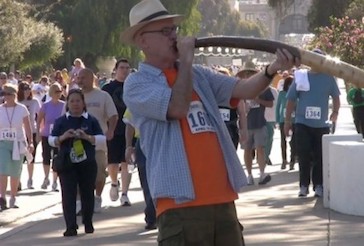 In his regular blog posts on Knowledge Is Necessity, John often reminds his readers to also consider any possible indicators of ADHD:

Because unrecognized ADHD could be what is holding you or your loved one back. Perhaps it’s not bi-polar but actually ADHD. Or the two are co-existing: bipolar with some attention-impulse issues; ADHD with some mood-emotions issues.

Likewise, if you’ve been diagnosed with ADHD (or suspect you have it), it’s also important to watch for bipolar and mood-disorder symptoms. Stimulants alone can exacerbate those issues.

Either way, in bipolar disorder, if co-existing ADHD is not addressed, treatment is problematic frustration with meds, with no recovery.

In ADHD, if co-existing bipolar is not addressed, same thing: treatment is problematic, frustration with meds, with no recovery.

I encourage you to learn about the importance of second opinions when it comes to psychiatric diagnosis: Frank South, author and Hollywood screenwriter, joined the PBS Second Opinion team to talk about ADHD and proper diagnosis.

For many years, John also wrote about bipolar disorder at Health Central. This post originally shared excerpts from a blog series he wrote there on the ADHD and bipolar disorder connection, along with links to each post. Unfortunately, those posts have disappeared.  I have left the excerpts below, to give an idea of the questions we ask about the ADHD and bipolar connection.

Diagnostic Labels: What Are They Good For?

Rarely, if ever, do we “just have bipolar.” Something else is invariably going on. Perhaps not full-blown, often “a little bit of this” and “a little bit of that.” For instance, Ellen Frank of the University of Pittsburgh has done work in the overlap between mood disorders and anxiety. I recall hearing her in a talk telling people that just two symptoms of another condition can significantly complicate the course and treatment of the mood disorder.

You are probably reading this page because you know in your bones that you have bipolar [or in this blog’s case, ADHD]. If you are like me, you may have welcomed the diagnosis. It explained your whole crazy life. It offered you the hope of getting your life back on track, once you figured out the nature of this beast.

But, if you are like me, you also found that there were more obstacles to your recovery than you bargained on. Once you had a handle on controlling your depressions and manias, you may have noticed some quirks in your thinking and emotions and behaviors. What was going on?

A little bit of this and that? Another full-blown diagnosis?

You know how it goes down. It’s late evening, you’re starting to droop, big day tomorrow, time to hit the hay. But first, five minutes to check out Facebook. Someone’s just posted “Ten Reasons Why Rednecks Make Bad Astrophysicists.” You decide you need a good laugh. You click to the full piece. It’s hilarious. You’re laughing your ass off. You can’t stop now, of course. You click on the link to “Seven Great Disasters in History Caused By Men Who Didn’t Ask for Directions.”

Inside your brain, your dopamine circuits are firing. The thinking parts of your brain lock in. You are alert and hyper-focused, but at the expense of any awareness of your immediate world and what you need to be doing to negotiate your way through it. All sense of time vanishes.

Lack of Impulse Control or Hypomania?

According to data from the International Mood Disorders Collaborative Project, nearly one in five individuals with bipolar experience ADHD.

What we really need to be aware of, though, is that we don’t have to have a full-blown ADHD diagnosis to complicate our lives. Virtually all of us (“normal” people included) have attention problems of some sort. Thus, we all need to be paying attention – to attention.

Another element of ADHD concerns the lack of ability to rein in impulses.

It works something like this: Attention is a function of the thinking parts of the brain. If you’re not thinking right, the front end of your brain is perpetually engaged in a losing battle with the back end of the brain.

The back of your brain may tell you that now would be a good time to belt out “There’s No Business Like Show Business” in your best Ethel Merman voice. The front end of your brain neglects to remind you that you happen to be in the middle of a business meeting right now.

Lack of Focus or Depression or Fatigue?

Diminished ability to think or concentrate, or indecisiveness …

Now compare that to this symptom for ADHD:

“Fighting through the fog” is how those with ADHD describe their attempts to achieve some form of mental clarity.  All of us (even those considered “normal”) know what this is like. We experience it every morning, prior to our coffee, which I jokingly refer to as my “neuro-cognitive starter.”

Gulp-gulp-ahh! The fog lifts. But what if it doesn’t? What if, in effect, you don’t fully awaken? Is this depression or is this ADHD? Maybe chronic fatigue?  Perhaps all of the above?

Previously, we looked at the confusion between hypomania and ADHD and depression (and fatigue).

By way of example: If you are dancing on a table during a business meeting, oblivious to those around you, is it hypomania or ADHD?

What if you are:

Is it hypomania or ADHD?

77 thoughts on “The ADHD and Bipolar Disorder Connection”