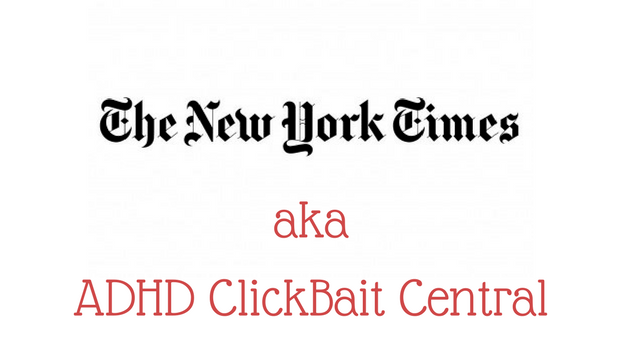 The New York Times has recently published a parade of hit pieces on ADHD in its opinion section. This merits calling out.

As a veteran print journalist who grew up respecting The New York Times, I’ve been horrified to see such blatant anti-science fearmongering. I canceled my subscription after decades. I did this partly as protest and partly because I no longer trust the paper’s editorial judgment.

Yet I retain my subscription to the Washington Post. That paper has an excellent history of balanced, compassionate reporting on ADHD. Will it survive new ownership and the online competition for web traffic (and ad dollars) by any means necessary? We shall see.

For years, the paper has treated ADHD as a juicy “clickbait pinata”: Bash it and all the web-traffic goodies fall out!

Before that, it was pediatric bipolar disorder.

Consider the particularly noxious front-page “10,000 Toddlers Treated for ADHD!”  Defying ethical journalistic practice, reporter Alan Swarz sneaked into a CDC event at the Carter Center in Georgia, and then proceeded to mangle the information in order to get a front-page story.  (When I was in the newsroom, we called that “hot-dogging” and it was not tolerated.)

ADHD is a Legitimate Medical Issue

ADHD is a legitimate diagnosis that remains underdiagnosed and poorly managed even when it’s diagnosed. It is wreaking havoc for millions of people in the U.S. and worldwide.

You would not know that from reading this reportage and these egregious opinion pieces. With the latter, each comes from a fringe non-expert with better PR placement than an understanding of ADHD. Most are peddling a book and a “contrarian position” on ADHD, which the editors lazily assume provides balance. Obviously, neither cares who they hurt in the process.

These non-experts exploit public ignorance and fears about ADHD for their own gain. Surely that behavior features prominently in the Diagnostic and Statistical Manual (DSM).  I am not being sarcastic. 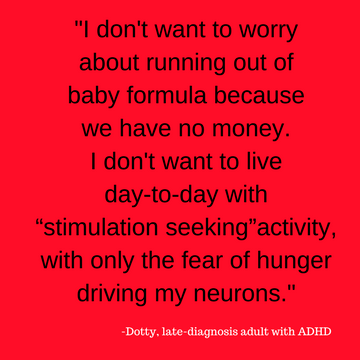 Now, here is my friend Dotty’s excellent Letter to the Editor, written in response to A Natural Fix for A.D.H.D. – The New York Times.

As far as I know, the paper did not publish her letter. That’s why I publish it here.

Dotty, who has ADHD and whose husband has ADHD—both diagnosed in their 30s—and who has four young children with likely ADHD, writes:

However, his prescription to “treat” our ADHD was to relieve our “boredom”—comparing us to a nomadic Kenyan tribe who needs the stimulation to find food and a mate.

There’s only one problem: Nomadic tribal peoples don’t get to write screenplays.

They also don’t have dental care and strong teeth. Their kids don’t get antibiotics, or a good education, or even clothing. (There’s no mention of the infant mortality rates. Or how long the adults live. Or even of the smell that they endure every day.)

These tribes live every day in “crisis mode,” searching for the next thing that will feed them—just for that day!

Living in Crisis Mode is Exhausting

Oh, but you don’t want us to actually become nomads; you just want us to be “stimulated” by doing things like running our own businesses.

The only problem is that, according to Forbes magazine, 8 out of 10 new businesses fail! Nomads and entrepreneurs don’t make their kill every day, Dr. Friedman.

I’m sorry, but I’m tired of living in crisis mode.

Adults with untreated ADHD typically have major issues with self-regulation and self-control.

That includes things like keeping track of bills, holding down a job, making sure your kids get fed in the middle of the night when you’d rather sleep. Since many of us can’t do these things consistently without treatment, we’re constantly running around in a crisis.

Plus, ADHDers—and their spouses—typically have stress-induced diseases by middle age because their lives are constantly in chaos!

You correctly say that we’re born with it, yet you disparage treatments that can regulate these symptoms? I’m sorry, you’re not living with the condition, and I am.

[Gina’s note: We do not know, in fact, if Friedman does or does not have ADHD. In my experience, the most vocal critics of ADHD have it themselves and have something to sell.]

The Hard Reality Is:

I don’t want to worry about running out of baby formula because we have no money. I don’t want to live day-to-day with “stimulation seeking” activity, with only the fear of hunger driving my neurons.

I want a peaceful life, with happy memories made with my kids. I want to make long-term plans for financial prosperity, and work to reach them. I want to write screenplays, stage plays, songs, and novels. Before I do that, I want to raise my young children and enjoy their antics—not run around like a chicken with my head cut off.

I’m tired of having the “change your life instead of getting on meds” discussion about this REAL disability.

If we were born without hands instead of with under-performing D3 receptors in our brains, NO ONE would tell us to change our career goals. Instead, medical teams would work tirelessly to make sure that we could reach our dreams, whether we had fingers or not.

That’s what ADHD researchers and clinicians do, and that’s who I’m going to listen to. According to your website, your specialty is depression. I’m not taking your prescription for my “boredom,” because you’re not a specialist in my condition.