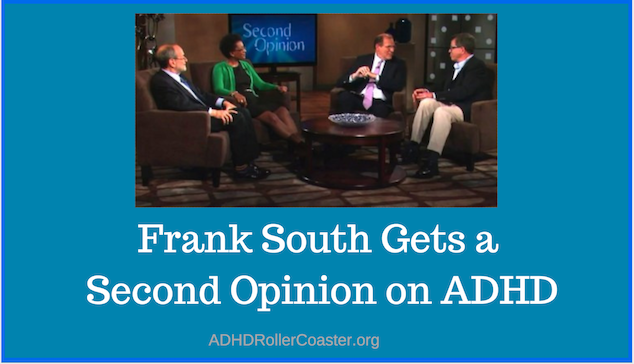 Frank South went for a second opinion on his Adult ADHD diagnosis. That is, he went on the PBS medical show “Second Opinion” to talk about Adult ADHD.

Do you need a second opinion on ADHD?

Are you old enough to remember when patients were advised to get a second opinion about any major (and some minor) diagnosis?  This was before managed care. The idea was this: Physicians are fallible in their diagnostic abilities. “Get a second opinion.”

Even if managed care has largely decimated the idea of second opinions, it’s still important.  Especially when you suspect you have ADHD but are dismissed without much thought from a professional.

Have you been diagnosed with depression, anxiety, bipolar, PTSD, Asperger’s, or even dyslexia—but treatments have not helped? Maybe they don’t make full sense? It might be time to get a second opinion—with a professional who understands those conditions and Adult ADHD.

Thanks to American Public Television and the University of Rochester Medical Center.

In the video below, Second Opinion host Peter Salgo, MD, talks with:

—Anthony Rostain, MD, a professor of psychiatry at the University of Pennsylvania medical school and co-director of UPenn’s Adult ADHD Clinic

Frank South Has Appeared Here, Too!

By the way, Frank has previously appeared  on the ADHD Roller Coaster, in the form of two wonderfully entertaining but poignant videos:

And in this post you’ll an excerpt from his must-read book of essays (A Chicken in the Wind And How He Grew):

Stories From an ADHD Dad: Frank South on Growing Up Undiagnosed

23 thoughts on “Getting A “Second Opinion” on Adult ADHD”