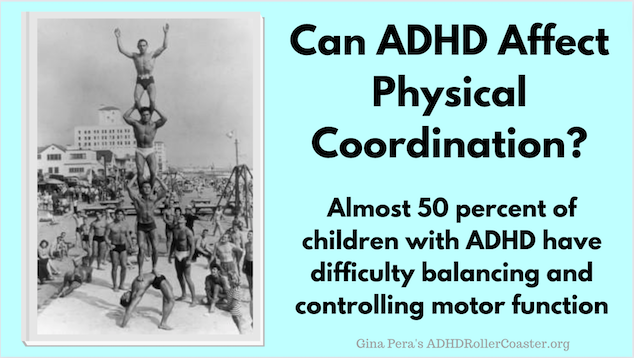 I’ll share a few examples here and then results from a very interesting study. At the end, you’ll find a link to a follow up post, about how medication might improve a balance issue called postural sway.

This issue is important because poor coordination is associated with physical injuries, some of them severe.  It can even affect the results of roadside sobriety tests. As a reader comments on this piece when it first posted (11/11/15):

This is another reason why anyone with ADHD should never consent to do standardized field sobriety tests. It is 100% legal to decline them.

Sober people fail them all the time, and anyone with ADHD has zero chance of performing them as a neurotypical person would. 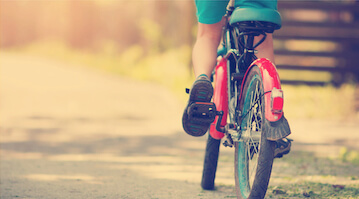 My friend and I walked behind her little girl, age 7, riding her bicycle. Every 30 feet or so, she’d veer off the sidewalk, and hit the dirt.  The little trooper always jumped back up—and on the bike. Undeterred.

Still, I found it painful to witness. Was it poor vision? She did wear eyeglasses, which kept slipping down her little nose (despite one of those straps that is supposed to secure them in place). Perhaps the half-on-half-off eyeglasses distracted her? Marred her depth perception? Wasn’t addressing the visual-space problem? Or was it balance?

Then there’s my husband. He’d always described himself as clumsy. “I knock into things,” he’d warn early on in our relationship, “so don’t put anything you value around me.”  (He was right!)

Before we knew about ADHD, he mostly attributed his “Bull in a China Shop” tendencies to his Lumberjack-esque build. Yet, there seemed also an issue of balance and coordination. For example, certain yoga poses eluded him, despite years of practice. So did indoor rock climbing.

Having taken medication for more than 10 years now—and for  years taking a class that works chiefly on balance—his “clumsiness” seems resolved. (For the most part. Hey, sometimes he’s still a big guy in small spaces.) 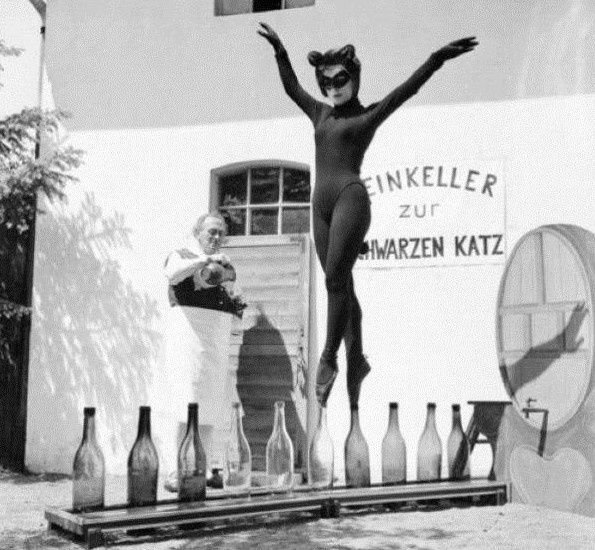 For 50% of Kids with ADHD? Brain-Based

For years, I’ve also heard reports about “clumsiness,” from both adults with ADHD and their partners. It results not only in bumps and bruises but in broken prized objects. Was there a connection between clumsiness and ADHD?

Turns out, yes, there is. Some new research is particularly interesting. We’ve long known that children with ADHD experience greater-than-average challenges with “motor control”—in particular, balance.

Almost 50 percent of children with ADHD have difficulty balancing and controlling motor function. This includes when testing children with minimal demands such as standing on a fixed platform, eyes open.

With more challenging demands—such as standing with eyes closed or with a visual surround that disrupts the senses—even greater impairments have been seen.

It’s been suggested that these challenges around balance might account, at least in part, for the increased risk of injuries in children with ADHD (and adults as well).

What Is “Postural Sway”?

Recently, a study focused on examining “postural sway” in adults with ADHD found evidence to explain this phenomenon.

Fortunately, this is one study you can download for free (Postural sway and regional cerebellar volume in adults with attention-deficit/hyperactivity disorder) and read it yourself.

In biomechanics, balance is an ability to maintain the line of gravity (vertical line from center of mass) of a body within the base of support with minimal postural sway. Sway is the horizontal movement of the center of gravity even when a person is standing still.

In other words, postural sway looks something like this, in exaggerated form:

As you can imagine, excessive postural sway can be hazardous on the job:

I found the research results interesting for several reasons:

Thirty-two adults with ADHD and 28 control subjects performed various standing-posture tasks on a Wii balance board.

During each trial, participants were instructed to remain as still as possible for the duration of the 30 s trial. The first 5 s of each trial were not analyzed. Postural sway was quantified as the path length (in cm) of the center of pressure (COP) (e.g., Bucci et al., 2014; Shorer et al., 2012).

Whole-brain structural MR images were collected for each participant.

For More Information On This Topic:

Here is a collection of related research:

Here is my follow-up blog post: Can a Stimulant Improve Postural Sway? 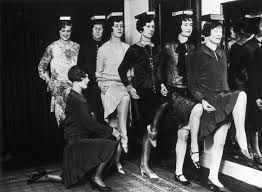 What do you think about these research findings?

Are you (or your loved one) among the estimated 50 percent

of folks with ADHD thought to have issues with balance?

If so, has that resulted in inconvenience or injury—

or perhaps the enticing challenge of a circus career?