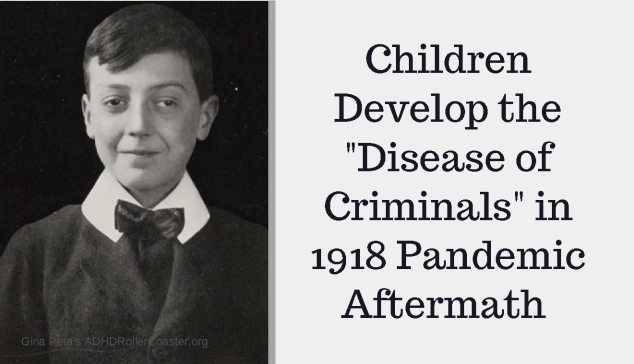 Following the 1918 pandemic, one viral infection drastically changed the behavior of children. In fact, it changed behavior to the point of calling it the Disease of Criminals.

This outbreak represented a significant threat to its victims—and to World  War I-torn populations. In the process, this largely worldwide phenomenon called into question existing attitudes toward “delinquent” behaviors. It also cast doubt on the idea that criminality was purely hereditary.

Initially, I set out to share with you only one profound connection, in light of COVID, between the 1918 Pandemic and ADHD. Yet, I found several more connections, including this one. Had you heard of the Disease of Criminals?  I hadn’t. But it’s a remarkable story. In some ways, it opened minds to the possibility of ADHD later.

In this 4-part series, I focus on fascinating—yet now little known—medical lessons from past pandemics. Specifically, I mean the 1918 Pandemic, or Spanish Flu. That famous event, however, followed waves of pandemics throughout the late 1800s and early 1900s. For example, 1889–1890’s pandemic, the so-called  Asiatic or Russian Flu, killed about 1 million people worldwide.

In post #1, I listed the four ways in which scientists say viral infections can damage the brain: 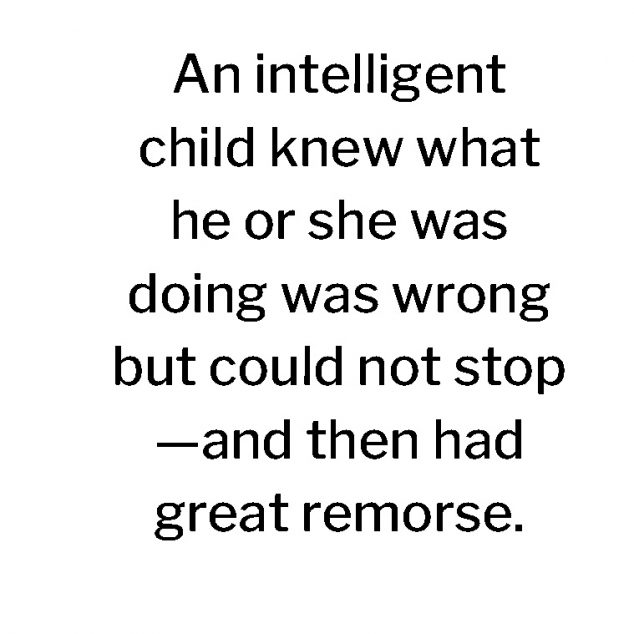 It was viral infection thought to cause the Disease of Criminals. Why so called?  Its survivors suddenly stopped acting like themselves. Instead, they acted as budding criminals— sometimes even murderous psychopaths.

Reports say the majority of children who contracted EL manifested psychological disturbances after recovering from the acute stages of the 1918 Flu. More than a third displayed behavioral disorders.  For most, this tragically lasted for the rest of their lives.

The proper name is Encephalitis Lethargica, or “Sleepy Sickness.” In its wake came enormous societal and medical changes—several related to ADHD.

It is quite a common thing for children of tender years to be sent to mental institutions, but it is somewhat unusual for mental disorder of such a degree as to require certification to occur in a boy at 10 who had previously been of sound mind.

With that, Macphail introduced the case of a previously “perfectly normal” boy. On the 29th of December 1920, the boy developed sudden and radical behavioral changes that brought him to the hospital.

The boy’s medical certificate declared that he was:

irresponsible, subject to frequent and sudden periods of excitement’, becoming so unmanageable that he had tried to jump through a window, put his head in the fire and stab his mother with a knife. Two months after returning home, he developed an uncontrollable temper and became restless.

The boy’s case was an early one but unfortunately only one of many to come.

What made this and subsequent cases remarkable? The majority of patients had no previous history of mental illness. Even more unsettling to some observers, their intellect seemed to remain intact. 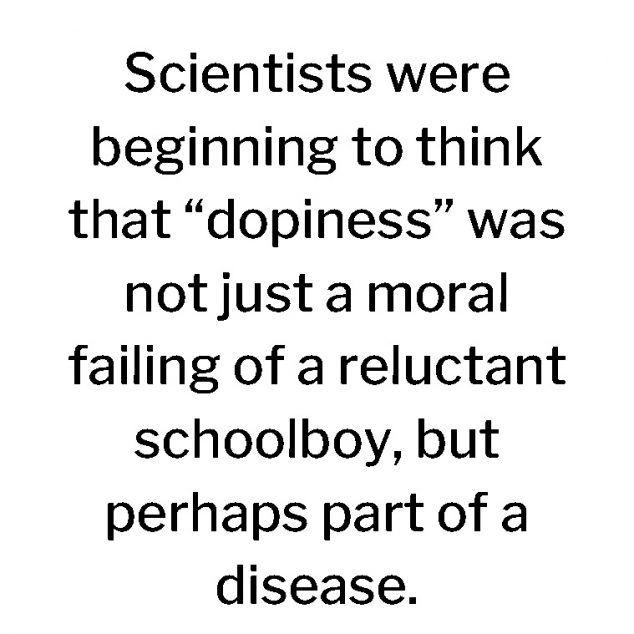 Estimates from the late 1920s indicate that over 70% of children who contracted EL in Britain suffered psychological disturbances after recovering from the acute stages of the disease, with more than a third showing behavioural disorders and even criminal propensities….

In England and Wales, EL was made compulsorily notiﬁable on the 1st of January 1919, and in 1924, the year of greatest national incidence, a total of 5,979 cases were registered in the British Isles, with case mortality at an estimated 26%. These ﬁgures placed Britain as the second most affected country in the world that year, topped only by Japan which recorded some 6949 cases.

Ensuing reports detailed some patterns of restless and destructive behavior, or “slavery to impulses”: 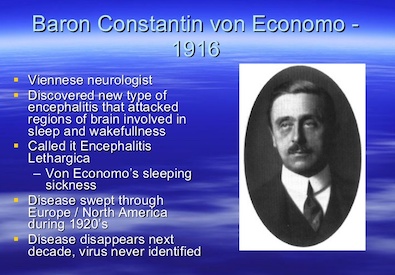 Headline: The Boy Who Has Lost Control

Sensational newspaper headlines, including in the United States, between 1920 and 1927 announced the phenomenon:

Scientists were beginning to think that “dopiness” was not just a moral failing of a reluctant schoolboy, but perhaps part of a disease.

It’s particularly heartbreaking to read of cases where an intelligent child knew what he or she was doing was wrong but could not stop—and then had great remorse. In one case, this led to suicide in a young adult.

What to do with these children, for which there was no treatment? This was not typical “criminal” behavior. Nor was it, to use a phrase from that era, “mental deficiency.”

Observers viewed these abrupt behavior changes as all the more perplexing because the phenomenon came against a changing backdrop of thought about so-called “mental deficiency”—mixed with tremendous societal disruption between World Wars I and II.

Let’s draw a clearer picture of that time, to see how the strange lingering effects of the “sleepy sickness” mixed with these societal changes.

In England and elsewhere, a growing body of science supported the idea that “mental deficiency” and “juvenile delinquency” were hereditary. Purported humanitarian measures protected these identified individuals from themselves and society –and society from them. (Hitler also exploited this practice, called eugenics, to commit atrocities.)

The measures, however meager they were in reality, included providing care in institutions or training those capable of learning jobs and being independent.

But remember: These were also the “intra-war” years. Fathers had been lost to war (death or incapacitation to physical or psychiatric injuries, such as “shell shock”). Massive unemployment found mothers hard-pressed to both earn money for feeding their families and to mind the children. The result? A surplus of children and adolescents taking to the streets. 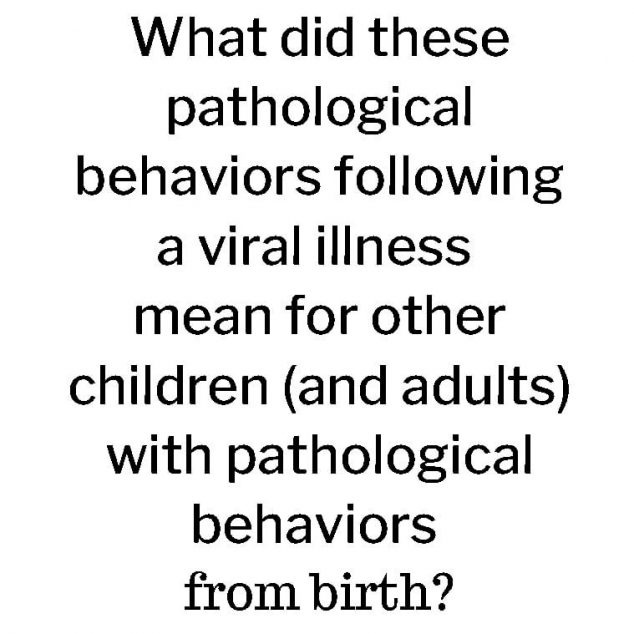 All these factors made for a tangled thread around what exactly was happening with the sudden rise in behavioral disorders.

Perhaps the most puzzling phenomenon was this: How could the mentally deficient—viewed at that time as being present from birth, perhaps inherited—also be intelligent and have a “perfectly normal” past?

As time went on, more sophisticated perspectives developed and laws enacted to better address the physical nature of some pathological behaviors.

Meanwhile, the phenomenon of these children, thus drastically transformed, threatened the social order and even burgeoning notions of mental illness. As you will soon read, the adult survivors of EL displayed markedly different symptoms, though equally tragic.

Before we get to that in post #4, though, we first examine in post #3 the potential connection between these pediatric Encephalitis Lethargica survivors and the accidental discovery that Benzedrine alleviated what we today view as ADHD symptoms.

As always, I welcome your comments
—Gina Pera

8 thoughts on “Post 1918 Pandemic: Children Develop the Disease of Criminals”