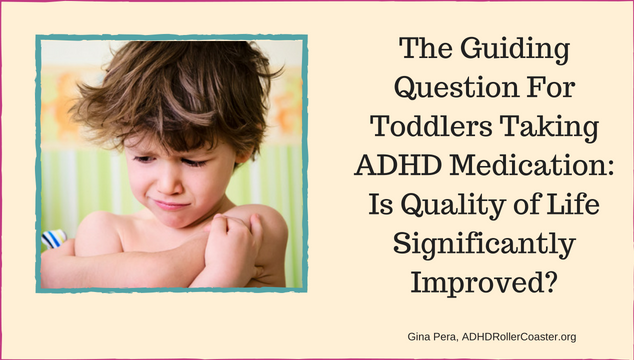 Toddlers and ADHD: A topic in the news lately. Did you miss Part 1? Please click here: Part I: The Truth Behind “10,000 Toddlers”.

Here in Part II, I continue to educate the public on why it’s sometimes wise to medicate young children for their ADHD symptoms.

The public must be helped to understand: ADHD is not just about “bad behavior”—or even “focus.” Dopamine affects many physiological processes throughout the body.

There is a dangerous cause and effect: When The New York Times publishes an inaccurate story about ADHD that whips up public fury, it can over time affect public policy. I explain below.

Most of you are familiar with the long-running attacks that The New York Times has long waged on psychiatry. It pre-dates Alan Schwarz—but perhaps not his supervising editor.

The paper’s crusades include performing the unscrutinized bidding of Senator Chuck Grassley (R-I) in persecuting pediatric psychiatric researchers.  I touch upon it in this post (Dr. Thomas E. Brown Responds to NYT’s Alan Schwarz). It includes a rebuttal to the paper from preeminent ADHD expert Thomas E. Brown, PhD..

The fact that bipolar disorder exists in children seemed unfathomable to reporters Benedict Carey and Gardiner Harris. Consequently, they unleashed a firestorm against leading researchers in the field of pediatric psychiatry. They included some  ADHD researchers.

More recently, sports reporter Alan Schwarz has issued a series of sensationalized stories on ADHD. He uses sources who are little more than media gadflies, fringe figures, and the long-retired yet seeking a soapbox (e.g. Allen Frances, Larry Diller, and Keith Conners).

Here is the latest piece: Thousands of Toddlers Are Medicated for A.D.H.D., Report Finds, Raising Worries.

[Are you wondering about the periods between the letters in ADHD? That is The New York Times style. Only that paper insists on this non-standard spelling. It is also the title of Schwarz’s new book, A.D.H.D. Nation, a lamentable cobbling together of his terribly reported stories, along with dramatic storytelling around “Big Pharma Is Out To Get You!”]

In Part I, I explained the slapdash way in which Schwarz manipulated the data on which his “hard-hitting investigation”  is based. I also explain the various potential physical fallout from ADHD.

Craziness might dominate online. But in the real world, legitimate experts perform legitimate research and treatment.

Compared to the self-promoting gadflies, the public hears little from these experts because they actually are busy working:

Below, you’ll find excerpts from a thoughtful, nuanced piece on the topic by a legitimate expert.  Michael J. Manos, PhD,  heads the Center for Pediatric Behavioral Health at The Cleveland Clinic and has an impressive record of research.

A Respected Expert on ADHD in Toddlers 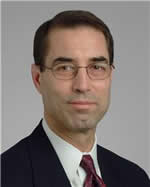 This two-part post originally appeared on my blog in 2014, when the story first came out. My motivation: Knowing clearly that there would be long-lasting and damaging repercussions. I was right, unfortunately.

Please note this portion of one of the bulleted items above:

Young children may not make associations between instructions and rules and the consequences of violating them; subsequently, hyperactivity and impulsive behavior are relatively immune to psychosocial intervention.

That’s why the CDC’s new treatment guidelines for pediatric ADHD are so problematic. They insist that behavioral therapy be emphasized over medication.

Russell Barkley, PhD, and I countered that unsubstantiated recommendation in this post: Hey CDC? Why Misinform About ADHD?

Do you think this turn of events is simply a coincidence? That these CDC guidelines came out after Schwarz’s campaign had time to percolate up from public opinion to public policy? I do not.

All actions have consequences, and this has been a horrible after-effect for the ADHD community. 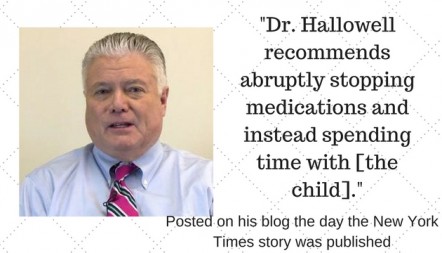 When it comes to factors fueling the anti-ADHD-medication hysteria, consider Ned Hallowell, MD.

He posted this message, below, to the public on his blog in response to the “10,000 Toddlers”  piece. He repeated it on the Fox & Friends TV airwaves.

Here it is, in its entirety:

People are looking for a quick solution for an age-old problem of rambunctious children. We should play with them and take care of them instead. Long-term effects are not understood. A controlled substance is not a trivial intervention.

Instead, human connection is the better solution – albeit labor intensive. Physicians that are well-trained do not give in to the pressures of the parents.

Dr. Hallowell recommends abruptly stopping medications (no side effects) and instead spending time with them.

Note: He did not say, “Get a second opinion” or any more prudent suggestions. He told viewers in the Fox audience to abruptly stop medications—and assures this will bring no side effects.

According to Hallowell,  parents of young children with severe ADHD simply need to pay attention to them. Love them!  Do that and poof! The medical condition called ADHD, with its far-reaching impact on the body and brain, is gone.

Furthermore, parents giving their children medications for ADHD are seeking a “quick solution”? It sounds straight from the anti-ADHD wingnuttery playbook, doesn’t it? Yet, it comes from a self-proclaimed ADHD expert—albeit one who says he eschews medication himself.

[As an aside, Hallowell has also sold his name to certifying chiropractors for treating ADHD. Yes, chiropractors. You can read about it at American Chiropractor.]

This is very dangerous: A “prominent” psychiatrist who has made himself synonymous with ADHD. He takes to the national airwaves telling parents that he’s never met, to stop giving to children he’s never examined, medication prescribed by a physician he’s never consulted with.

I know this will not sit well with some of you, who consider Hallowell a sanctified figure. But simply consider the facts of his actions. It’s all there in black and white—and video.

Actions have consequences.  Hallowell going on Fox and Friends to decry this horrible “medication toddlers” phenomenon showed no forethought or compassion for the people he risked damaging.

These Children Are Individuals, Their Cases Complex

No legitimate expert will rush in and medicate a young child when behavioral strategies are in order—or possible. That’s especially true for a child under four.

Each child’s case involves many factors and much deliberation. But it should not involve hysteria, fueled by ignorant hucksterish physicians, sharp-elbowed reporters, and concocted numbers.

Real children’s lives are at stake.

With this latest hit piece from The New York Times and Alan Schwarz, the Internet today finds itself sodden with disinformation and misplaced anger.

If you think this eventually won’t affect public policy, including insurance coverage of ADHD and access to medication, I fear you are much mistaken. [Sadly, I was right. See updated note above.]

Please speak out against this co-option of rational discourse. Avoid the hits-hungry media and hucksters who are more interested in high speaking fees than doing the right thing.

Much depends on your taking action and refusing to let the self-promoters ruin it for everyone else.

I welcome your comments. — Gina Pera