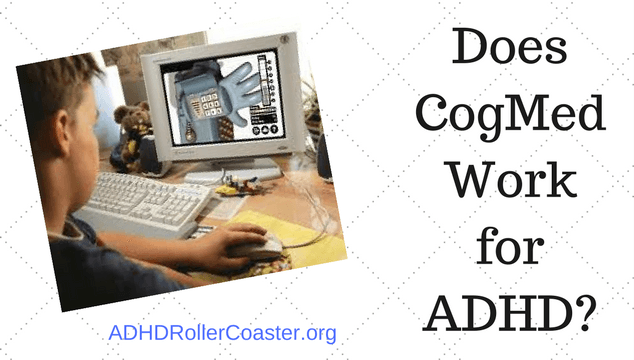 Does the working-memory training program called CogMed work for ADHD? That’s the question.

The Working Memory Training bandwagon could soon be screeching to a halt. When it comes to treating ADHD symptoms, at any rate, results from two recent studies undercut previous claims.

Early Concerns About Rush To Acceptance

Years ago, I participated in a list-serve of ADHD professionals. When I questioned the validity of new programs bursting onto the scene such as CogMed (which is discussed below), all hell broke loose.

Psychologists using it in their practice roundly castigated me. We cannot dismiss the bias created by the profit motive.

The fact remained: At that time (circa 2008), woefully insufficient evidence  supported offering CogMed to children or adults with ADHD. But that didn’t stop the sales pitch.

The general consensus among list members who’d tried it and also had ADHD? No improved function in life. But they felt they were “doing something important.” Overall, it sounded like an expensive distraction to me.

When offered such “alternatives,” we always must consider the opportunity cost. That is, what are you giving up? Will an adult lose a job or a marriage if legitimate treatment is delays? Will a child fail a grade or suffer other continuing losses to self-esteem?

What are we missing when we pursue the unproven instead of evidence-based interventions such as:

As it turns out, my skepticism might have been well-founded. Yes, initial studies were favorable—and had some problematic conflicts of interest. But more recent research counters those studies’ conclusions.

Thanks to David Rabiner,  Associate Research Professor at Duke University’s Department of Psychology  Neuroscience, I can share with you (below) a sophisticated analysis of the research.

Dr. Rabiner has long performed the excellent service of parsing the research around ADHD in his newsletter, Attention Research Update. You can subscribe to his free newsletter here and read through the substantial archives once you are subscribed.

I appreciate Rabiner’s clear writing style. Still, research terminology can be complex for the average reader. The complete analysis, below, might be “too much information” for some.

So, here is the bottom line,  as Dr. Rabiner writes:

What can we conclude from this work?

This does not mean that there is no utility to CWMT, however, particularly for individuals with demonstrated working memory deficits.

If one’s treatment goal is to enhance working memory, CWMT may have real value.

If the goal is to bring ADHD symptoms under control, however, these findings indicate that for most children with ADHD, CWMT would not currently be considered a reasonable substitute for medication and/or behavior therapy.”

Here is the full report from Attention Research Update:

There are several reasons why it is important to develop evidence-based ADHD treatments in addition to medication and behavior therapy.

In response to these limitations, researchers have shown growing interest in whether cognitive training—generally done via computer—can induce more lasting changes in children’s ability to focus and attend. One approach that has shown promise in helping youth with ADHD, and which is now widely available, is Working Memory Training.

The Evidence for Working Memory Training

Working Memory Training is based on findings that Working Memory (WM)—the ability to hold and manipulate information in mind for subsequent use—is frequently compromised in youth with ADHD and may contribute significantly to symptoms of inattention. WM deficits also to contribute to the academic struggles that many children with ADHD experience. Developing an intervention to enhance WM in children with ADHD could thus be extremely helpful.

Several published studies suggest that WM training is a promising intervention for children with ADHD.

In one (see helpforadd.com/2005/march for a detailed review), children with ADHD were randomly assigned to high intensity (HI) or low intensity (LI) WM training.

The HI treatment involved performing computerized WM tasks, e.g., remembering the sequence in which lights appeared in different portions of a grid, recalling a sequence of numbers in reverse order, where the difficulty level was regularly adjusted to match the child’s performance by increasing or decreasing the items to be recalled.

This is called “adaptive” training because the difficulty level adapts to match the child’s performance and children are consistently challenged to expand their working memory capacity.

In the LI condition, the tasks were similar but the difficulty remained low throughout, i.e., the number of items did not increase when children responded correctly. For these children, their working memory capacity was not consistently challenged and was not expected to grow as a result. This was considered the control condition.

Each group trained 30-40 minutes per day, 5 days per week, for 5 weeks with training supervised by parents. Parents were supported through weekly phone calls with a trained coach whose role was to help make sure training was implemented as intended.

Furthermore, parent reports indicated significant reductions in ADHD symptoms, particularly inattentive symptoms; these reductions remained evident at 3 months. However, no benefits in ADHD symptoms were evident in reports provided by children’s teachers. Given the importance of improving attention in the classroom, this was a significant limitation.

A subsequent study (see helpforadd.com/2012/july) also used random assignment to HI vs. LI training, and observed the impact on children’s behavior in a controlled classroom setting.

Results from these studies, along with several others, suggest that Working Memory Training (the specific training system used in these studies was Cogmed Working Memory Training, i.e., CWMT) yields benefits in non-trained measures of WM and reductions in parent-report inattentive behavior. However, no study has found benefits in teacher reported behavior and symptoms.

Concerns About The Evidence

A significant limitation in the evidence for using CWMT to treat youth with ADHD is the absence of teacher-reported benefits.

In addition, some researchers question whether the LI training is an adequate control condition. This is because although children in HI and LI training complete the same number of trials each session, the LI training takes less time each session because it does not become more difficult.

Thus, the conditions differ in ways other than whether difficulty level adjusts to match the child’s performance.

Some have also suggested that parents of LI children may become aware that their child has been assigned to the control group. If parent are not truly “blind” to condition, it could explain parent-reported benefits that have been found.

For these reasons, some have suggested that CWMT should be regarded as no more than a “possibly efficacious” treatment for ADHD and not considered a ‘first-line’ treatment like medication and behavior therapy.

A certified coach contacted parents each week to evaluate the performance and motivation of the child using a standardized questionnaire. Neither child, parents, or coaches knew which condition the child had been assigned to. Because coaches were kept blind to children’s condition, and thus did not receive detailed information on how children were progressing through the exercises, they were unable to provide coaching support to parents as is done in regular clinical practice.

Outcome measures included neurocognitive assessments, parent and teacher reports of ADHD symptoms, and a global assessment of functioning made by study clinicians. Results indicated benefits of HI training on only 1 of 25 outcome measures, a measure of verbal working memory. Importantly, no training related differences were found for parent, teacher, or clinician ratings. The authors conclude that their findings cast “…doubt on the claims that CWMT is an effective treatment in young children with ADHD.”

A randomized clinical trial of Cogmed Working Memory Training in school-age children with ADHD: A replication in a diverse sample using a control condition. (Chacko et al., 2013). In this second randomized controlled trial, 85 7- to 11-year old-children with ADHD were assigned to HI or LI CWMT.

Training consisted of 5 30-45 minutes per week for 5 weeks; this is the typical session length for children in this age range. Additional trials were added to LI training sessions as needed so that the length of LI and HI training sessions were more comparable. Also unlike the prior study, coaches had complete access to children’s training data so that they could oversee parents as is done in standard clinical practice using CWMT. Outcome measures included parent and teacher ratings of ADHD symptoms, standardized assessments of working memory, computerized assessments of attention, and academic achievement testing.

As reported prior studies, children receiving active training showed significant gains in working memory compared to control children. This was true for both visuo-spatial and verbal working memory.

However, computerized tests of attention showed no significant difference between the groups. The same was true for parent and teacher ratings of ADHD symptoms as well as for measures of academic achievement.

Based on these largely negative results, the authors conclude that CWMT should not be used as a treatment for ADHD. 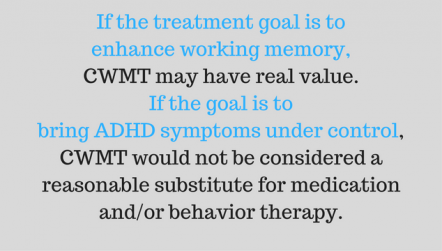 Results from these 2 randomized-controlled trials do not support CWMT as a first-line treatment for ADHD.

In both studies, there was evidence that training produced gains in some non-trained measures of working memory. However, improvements in parent or teacher ratings of behavior were absent.

Given the adverse impact of core ADHD symptoms on academic and behavioral functioning, this is a significant limitation.

In the first study, one could argue that coaches could not use detailed records of children’s training performance to guide their coaching calls with parents, which may have undermined the training effectiveness.

This was not true of the second study where coaching supervision was provided in the standard manner. This second study was also the largest trial of CWMT for ADHD conducted to date and the sample size was sufficient to detect meaningful treatment effects if they were there.

What Can We Conclude From This Research?

Despite promising initial reports suggesting that CWMT is a potentially effective treatment for ADHD, these studies significantly undercut this conclusion.

This does not mean that there is no utility to CWMT, however, particularly for individuals with demonstrated working memory deficits.

If one’s treatment goal is to enhance working memory, CWMT may have real value.

If the goal is to bring ADHD symptoms under control, however, these findings indicate that for most children with ADHD, CWMT would not currently be considered a reasonable substitute for medication and/or behavior therapy.

One final comment. I think it is important to note that many clinicians are using CWMT with children who have ADHD and many have reported that they are obtaining good results.

A number of these are clinicians that I know and respect, and it is difficult to reconcile the negative results reported here with outcomes that are reported by many clinicians who use Cogmed in their practice.

This is an example of where research findings differ from clinical impressions, and I don’t think it is possible to conclude with complete certainty that one is right and the other is wrong.

However, if one looks to the research to make decisions about treatments to recommend for children with ADHD, routinely recommending Cogmed would be inconsistent with the current research base in my view.

Have you pursued Cogmed or other “brain-training” programs, for you or your child?

How did it go?

21 thoughts on “New Research Casts Doubt on CogMed for ADHD”