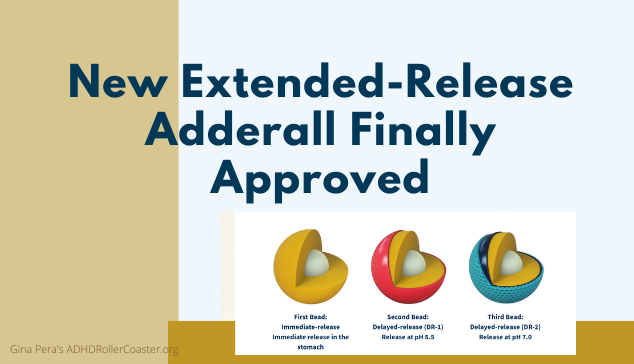 In case you missed it, there is a longer-lasting version of Adderall, called Mydayis.

Many people report frustration with the current Adderall shortage.  I suggest that a trial of Mydayis would be worth a shot—and might be easier to find.

Technically speaking, Mydayis is the same as Adderall. That is, both have the same active ingredients, mixed-amphetamine salts. Mydayis is claimed to last longer than Adderall and Adderall XR. Check out the Mydayis savings program.

Background on Mydayis, a Longer-Acting Adderall

In development as SHP 465, Mydayis stalled in the approval process for more than a decade.

Shire Pharmaceuticals first started the approval process in 2006.  A series of regulatory setbacks ensued until the FDA finally said Shire could refile in 2014. Then the FDA pivoted and asked for more more pediatric data first.

The year 2017 finally saw approval for now Shire-Takeda’s long-acting mixed-amphetamine salt medication, Mydayis.  This gives the company another long-acting amphetamine medication as its Vyvanse patent is set to expire in June 2023.

Here’s 2020 research on Mydayis:  A Phase 3, Randomized Double-Blind Study of the Efficacy and Safety of Low-Dose SHP465 Mixed Amphetamine Salts Extended-Release in Children with Attention-Deficit/Hyperactivity Disorder

A longer-lasting version of Adderall XR is finally in the pipeline.

After years of repeated setbacks, Shire announced earlier this month: It has struck a deal with the U.S. Food and Drug Administration (FDA) to move forward with its new longer-lasting Adderall product, for now called SHP465 (triple-bead mixed amphetamine salts – MAS), being evaluated as a potential treatment for ADHD in adults.

The protracted wrangling ended when Shire agreed to conduct a short-term efficacy and safety study in pediatric patients with ADHD (ages 6-17). Though Shire intends to win approval for this drug treating adult patients, the FDA wants more pediatric data in case it is also used in that population. (Most ADHD-targeting medications are used throughout the lifespan, despite specific approval for pediatric or adult usage).

In other words, SHP465 might be as problematic as the immediate-release Adderall is for some people. Including some children.  I wrote about this in The Tragic Truth Of Adderall, or “Madderall.” Or it might provide welcomed longer-coverage for people who respond well to Adderall. It all depends on an individual’s response.

As the behemoth “Big Pharma” in ADHD treatment, Shire’s overall ADHD franchise in the U.S. extends to 2029.

Adderall and Adderall XR have lost patent protection, and Shire has stated that the 16-hour version represents a viable product.

Past Company Press Releases on Mydayis

In a 2017 press release, Shire Debuts Mydayis and New Research,

In a 2015 press release (no longer available), Shire had said it anticipated the clinical trial’s first patient visit to take place in August 2015, with study completion targeted by the last quarter of 2016. More from the company:

Shire then expects to submit to the FDA by second quarter 2017 a Class 2 resubmission for approval of SHP465 as a treatment for ADHD in adults, which typically entails a 6-month review. Pending FDA approval, Shire anticipates launching the medicine in the second half of 2017. This update follows Shire’s announcement on October 9, 2014, that it was engaging the FDA to determine the parameters of clinical data requirements in order to submit the Class 2 resubmission….

…SHP465 demonstrated a statistically significant difference versus placebo at 16 hours post dosing, with onset of action starting 4 hours post dosing, as measured by the Permanent Product Measure of Performance (PERMP). Common adverse reactions in SHP465 registration trials (incidence ≥5% and at a rate twice placebo) in adults were: insomnia, decreased appetite, dry mouth, decreased weight, heart rate increased, and dysmenorrhea. These adverse events are generally known to be associated with the use of amphetamine products.

Reminder: I’ve never accepted pharmaceutical support of any kind, covert or overt.