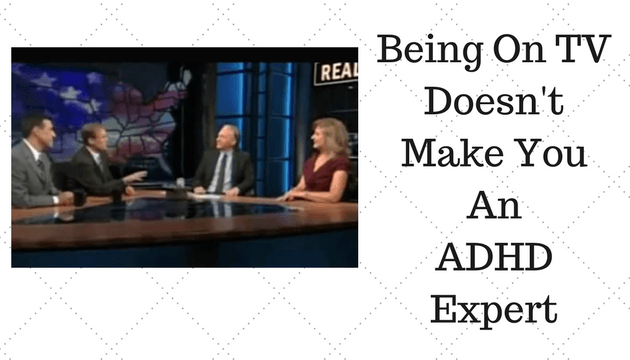 Wouldn’t it be great if we could bridge this “left-right” divide in our country?  If only we could agree about something.

Oh wait. Left and right do agree on something: That it’s okay to disparage the very diagnosis of ADHD, not to mention the medication used to treat it.

The implication? There’s nothing about ADHD that a good whupping won’t cure.

(Side note: We’ve already talked back once to that bad idea with this U.S. News and World Report piece: “One View: A Spanking Might Beat Ritalin.” Parenting columnist Nancy Shute provided a platform to ADHD gadfly-contrarian behavioral pediatrician Larry Dilller. Unfortunately, the news outlet deleted the comments. I had rallied many of my friends with ADHD to share how well childhood spanking worked for them. It didn’t.)

From there, Maher and the other two guests piled on ADHD, especially the medications that millions take to alleviate their symptoms.  (To judge for yourself, advance the video above to 24:30.)

I was waiting for one of them to say, “and the school said my children should be evaluated for ADHD!”  Then Ms. Huffingon piped up, as if on cue.  (Skim her last two books and you’ll find self-confessions of electronic-device overuse and sleep issues, which she claims led to her collapsing of exhaustion.)

Nothing breeds vitriol against ADHD like the suggestion that the person—or his or her children—might have ADHD. Please keep that in mind: It’s not just “non-ADHD” people who rage against the diagnosis and it’s treatment; it’s the “in denial” folks with ADHD, too.  In fact, sometimes they are the most ferocious in their attacks. Moreover, some of them have a hustle based on ADHD denial.

Business consultant, author, and Huffington Post blogger Michael Laskoff, who often writes about his experiences having ADHD, also took issue with the show in a recent column, “Being Famous Doesn’t Make You an ADHD Expert”.

We who know ADHD intimately know that all-too-familiar traveling companion: shame. Partly, shame originates from not knowing you have ADHD and internalizing all the inexplicably negative feedback you encounter, from childhood on.

Another type of shame, though, is lobbed with full force at people with ADHD.   It comes from people (some of them highly educated on other issues) who refuse to educate themselves yet self-righteously criticize ADHD as a “pharma invention” or “the disease du jour” or “overdiagnosed” or or or or.

These pundits are entitled to their own opinions, as they say, but not to their own facts. And when their deluded opinions target my friends with ADHD—on the airwaves, in print, or on the Internet—it leaves me at once angry and heartsick at this cold-hearted, mingy-minded ignorance permeating left and right.

My guess is, if it got them political capital or some other type of reward, yes. But ADHD makes a very convenient whipping post.

I figured it’s past time we hold up the mirror to the bloviating blowhards (even as they profess valiant defense of children and adults who would otherwise be unjustly “drugged”). Let them get a little taste of the shame they are doling out.  Hence The ADHD Hall of Shame.

What do you think?

20 thoughts on “Liberals, Conservatives Agree: It’s Okay to Bash ADHD, Bully the People Who Have It”